Zeeland is often called a ‘land van overkanten’ – a land of opposite shores. The estuaries Eastern Scheldt and Western Scheldt have made Zeeland into a land of islands, each with its own character. But Zeeland was not always like this. Where the province is located now, there never used to be an opposite shore in the past.

Thousands of years before Christ, when Neanderthals roamed this area as hunter-gatherers, the North Sea had not even been formed yet. Fifteen kilometers off the coast, a piece of skull from one of these Neanderthals was found in 2009. Krijn (he was given a typical Zeeland name) lived here approximately 40,000 to 80,000 years ago. 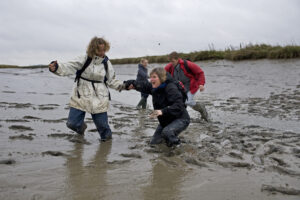 Eventually, the Eastern Scheldt as we know it today cautiously began to emerge as the connection between the Scheldt and the sea. It was for many centuries the most important waterway in Zeeland. The connection between the Honte and the Scheldt was established much later and only towards the end of the Middle Ages did the Western Scheldt become the most important waterway to Antwerp.

Sheep on the salt marshes

Modern man settled in Zeeland after the Neanderthals. At first, they were also hunters and gatherers, but they made the switch to agriculture. Old traces of this have been found in the Land van Saeftinghe. Long before Zeeland was reclaimed behind the dikes, people had already started to live here in large numbers. The first small dams and dikes date as far back as Roman times, for instance. Near Serooskerke on Walcheren, archaeologists discovered a tiny knoll and a small dike dating from that period Long before the year 1000 AD, Flemish abbeys let their sheep graze on the Zeeland salt marshes. And when the highest tide did wash over the salt marshes, shepherds and sheep would seek refuge on the ‘stelbergjes’ – the artificial mounds that they had raised. Sometimes they had a well and were then called ‘hollestelle’ – which is still a Zeeland family name today. Some ‘hollestelles’ (artifical drinking well) have also been beautifully preserved: the Bruinisser stelberg on the west side of Sint-Philipsland (just outside the dike on the Rumoirtschorren) and the hollestelle on the Ruisweg between Wemeldinge and Kattendijke.

From the twelfth century onwards, empoldering gained momentum with the construction of large ring dikes. This created large ‘old land polders’ such as the Yerseke Moer and Kapelse Moer on the east and west sides of the Canal through Zuid-Beveland. You can still see the traces of peat mining here. This is also true for De Poel, the old land area between Goes and Nisse. 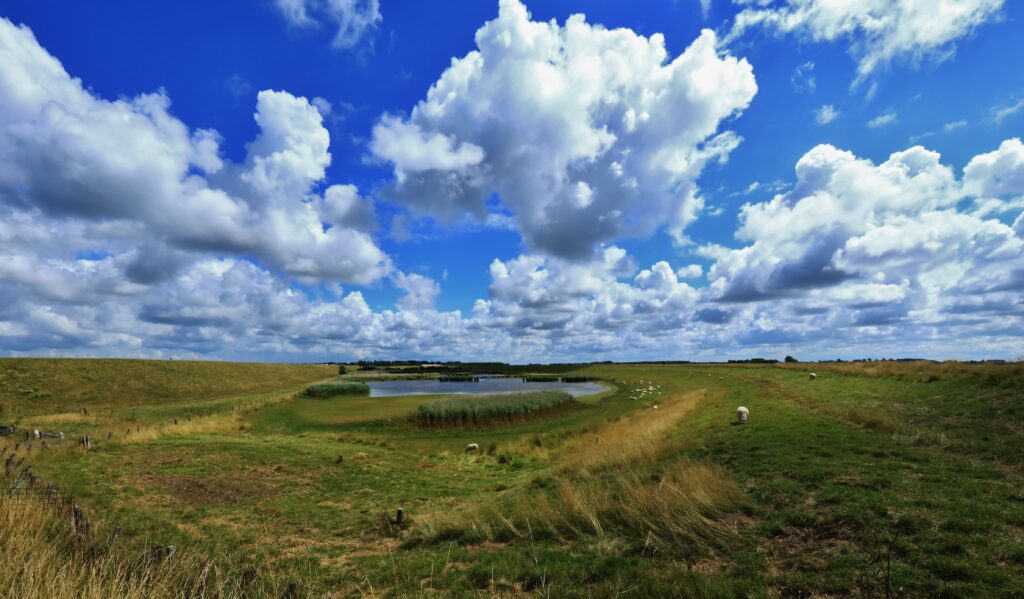 Later constructions of dikes were veritable conquests of the water. The Zeelanders dammed up complete tidal streams and diked up land that had dried up. These polders were often slightly smaller. And once Zeeland was almost completely reclaimed? Then there were devastating floods or the land was inundated during battle (the latter especially in Zeeuws Vlaanderen). That is why in the sixteenth and seventeenth centuries people were once again frantically diking up the land. If you see large, particularly straight and austere polders nowadays, then there is a good chance that you are looking at a polder from that time that was dammed up again. There are also many places where you can still clearly see the difference between the older (smaller) and larger, more modern rebuilt dikes. From the Grote Dijk, Noteboomdijk, Valdijk and Koedijk near Heinkenszand and Nisse, between De Poel and the younger, smaller polders of the Zak van Zuid-Beveland. These were later dammed up in the Middle Ages and are arranged like a cluster on the south-western side of the Brede Watering Bewesten Yerseke.

Bond with the water

Even after almost a millennium of large-scale dike construction and land reclamation, Zeeland remained ‘een land van overkanten’ a land of opposite shores. The Delta Works and the Western Scheldt Tunnel have done little to change this. Zeeland has always kept an eye on the sea. It is also a land of coastal lights and lighthouses, of passing hulks of ships and wrecks at the bottom of its waters, or randomly in the middle of a polder. A land of tiny, dreamy tidal ports and marinas to immense works and ultramodern projects of the Zeeland-Ghent joint venture North Sea Port. The bond with the water is still alive and well, albeit that the focal points are slightly different than they used to be. Would you like to experience the opposite shores for yourself? Get on the ferry from Vlissingen to Breskens (or the other way round) or, in the summer season, cross over with one of the many ferries that are operating then.