Zeelanders are innovative. Always searching for new sources of wealth and well-being. Canals, railways and industry gave parts of the province a whole new look. The layout of the landscape underwent a complete overhaul. Professionalism and welfare politics dominated Zeeland in the second half of the twentieth century.

But in reality, progress had been the magic word for much longer. In the nineteenth century, the government invested heavily in laying down canals and railway lines to promote prosperity in the province. Large-scale works were produced in that period: the Kanaal van Gent naar Terneuzen, the Kanaal door Zuid-Beveland, the Kanaal door Walcheren and the railway connecting Central Zeeland to North-Brabant. Connecting tramlines were then added to these. Traces of those trams can still be found. The conspicuously tall, old tram station on the Burghseweg in Burgh-Haamstede is now a residential building. There are also many villages where a tram has not ridden for decades, but where you can still find a Tram Street (Domburg and Koudekerke, for example). Do you fancy taking an old-fashioned train ride? You can hop on board the Goes-Borsele Steam Train. Their steam trains guide you through the Zuid-Beveland landscape.

Industry has profoundly changed the Zeeland panorama. De Schelde shipyard was set up in Vlissingen. A large part of the inner city was transformed into an industrial area as a result – to this day, the old centre of Vlissingen visibly comes to an abrupt end. On the site where De Schelde used to be, buildings such as the Timmerfabriek (carpentry workshop), Machinefabriek (machinery factory), Zware Plaatwerkerij (heavy sheet metal workshop) and a crane tower are still present: and in Museum De Scheldewerf has been housed in the old Verbandkamer (the former first aid post).

Thanks to the good connections between Belgium and the Schelde river, Zeeuws-Vlaanderen became an interesting location for French and Belgian factories. Food industry and eventually heavy industry settled along the Ghent-Terneuzen Canal: a phosphate factory (Sas van Gent), a coking plant and a fertiliser factory (Sluiskil). Both these villages developed themselves into fully-fledged industrial villages. In the Industrial Museum Zeeland (in a beautifully preserved former sugar warehouse in Sas van Gent), the story of industrial development in Zeeland is told. You can also see the steam generator of the old coking plant in operation here.

At the end of the nineteenth century, agriculture-related industries, such as dairy and sugar factories and flax production, started to establish themselves in the countryside. Trade in agricultural products also involved economic enterprise. For example, fruit auctions and cooperative purchasing societies with warehouses and silos were set up. Public utilities were built as well. Water towers are eye-catching witnesses to that era. During the tourist season in Axel, you can climb one of the highest water towers in the Netherlands. A footbridge gives you a view over the water reservoir of no less than 300 m³.

The Second World War and the flood disaster of 1953 caused enormous damage. For the restoration, Zeeland underwent an extremely rigorous overhaul. The province was given a completely new boost! Almost two-thirds of Zeeland’s agricultural land was reorganised and redistributed. The parcels of agricultural land and the farms were expanded. Many of Zeeland’s characteristic features disappeared as a result, although Zak van Zuid-Beveland, for example, retained its small-scale character.

Controversial hydraulic works were also carried out in this period. After the completion of the technical feat of the Oosterschelde Barrier, the Delta Works in Zeeland were finished. Fishing ports were closed off by the dams. You can read more about this in the Struggle against water section.

In the same period, Zeeland underwent large-scale industrialisation. Thanks to government support, Terneuzen and Vlissingen developed into large seaports and industrial areas. This brought about a significant increase in maritime shipping. Nowadays, giant ocean-going vessels manoeuvre their way through the channel in the Westerschelde. A sight to behold. You can get an excellent view of the gigantic ships from the sea locks on the outskirts of Terneuzen (the Portaal van Vlaanderen). From here, you can also take cruises on the canal from Ghent to Terneuzen. North Sea Port also organises cruises in the port of Vlissingen. 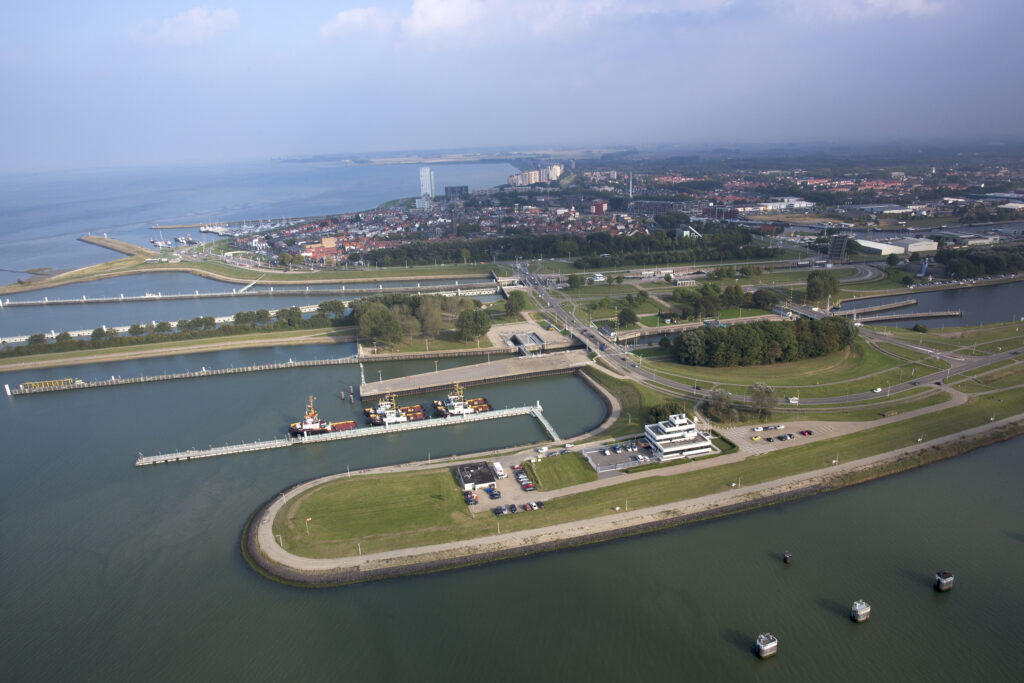 The shipbuilding, metal and chemical industries concentrated themselves in the seaports. The Borssele nuclear power plant was built to provide these companies with vast amounts of cheap energy. Later, a storage facility for radioactive waste was also built there. For the first time, industry was making a substantial contribution to Zeeland’s economy and the province was able to raise its profile around the world.

The economic tide turned in the 1980s. Entire sectors were facing problems. The government, education and the business community teamed up to launch new initiatives aimed at growing the regional economy. Sustainability became a spearhead: bio-based the magic word. Innovative sectors were linked to traditional business sectors: agrifood and aquafood. You can read more about this in the Salty and sweet section.

Dams, bridges and a tunnel

The dams built within the framework of the Delta Works connected the islands to each other by road. The Krabbenkreekdam connected Tholen and Sint-Philipsland. Thanks to the Zeeland Bridge, Schouwen-Duiveland and Noord-Beveland were connected to each other in 1965. All these connections were at the expense of ferry services, but they did make it easier for Zeelanders to visit other islands, for example while on a Sunday afternoon drive. The final act was the opening in 2003 of the Westerschelde Tunnel between Zuid-Beveland and Zeeuws-Vlaanderen, the longest traffic tunnel in the Netherlands. Innovation and determination made sure that all parts of Zeeland were finally well and truly connected.