The Netherlands was neutral during the First World War, but neighbouring Belgium, where a fierce battle raged for years, was not. Zeeland was a mere seventy kilometres or so from the battlefield and you could hear the artillery clearly here. The war had major consequences for Zeeland. The border shut down, smuggling took place, there were mistaken bombings and gigantic flows of refugees. Zeeland had to buckle down to get through this difficult time.

Even though the Netherlands did not fight in the war, the threat of war was constantly looming. The military was mobilised to guard the borders. Soldiers guarded the borders and there were divisions in the area of Bergen op Zoom and on Walcheren. The mouth of the Westerschelde estuary was closed to warships from both sides. This meant that submarines could not reach Vlissingen and the Netherlands was somewhat safer. But it also ensured that no one could come to Antwerp’s aid. 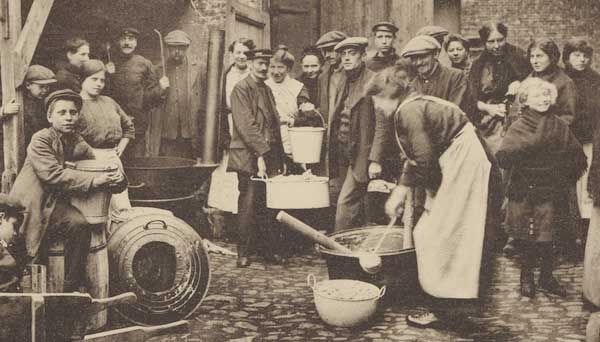 Soon after the start of the war, a flood of refugees refugees began to pour in. Hundreds of thousands of Belgian refugees entered the Netherlands via Zeeuws-Vlaanderen. In general, with plenty of good will and improvisation, these refugees were accommodated throughout the province. In Bruinisse, for example, refugees were housed by citizens and in empty inns, and furniture and other essentials were made available. However, the situation put a lot of pressure on the sparsely populated province and so the government stepped in to coordinate the relief effort. Emergency relief camps were set up and the Belgians were spread throughout the Netherlands. Some of them also made their way back to their own country when the front stopped advancing.

Both Belgians and Germans fled across the border. Since the Netherlands was neutral during the First World War, all foreign soldiers were interned. On a fairly regular basis, it also happened that due to technical problems, planes were forced to make an emergency landing on the beach of Cadzand. These soldiers were also interned. The planes became property of the Dutch air force.

Zeeland was an exceptionally interesting area for spiesduring the First World War. Refugees of all nationalities were present here. Moreover, there wasa a sailing route to Antwerp and a boat connection to England. On top of that, there were also the Belgian, German, English and French consulates. The authorities had their hands full with reports of espionage.

The Wire of Death

or Germany, it was already clear at the beginning of the war that the border with the Netherlands had to be locked down. They wanted to prevent deserters from leaving and Belgian patriots from crossing over to England via the Netherlands to join the war effort. Consequently, they erected an electric wire fence in 1915: the Wire of Death. It claimed many victims. This was partly due to the fact that people were not yet acquainted with electricity. Nevertheless, the border continued to attract people. Belgian war volunteers, spies, smugglers and German deserters all gave it a try. Some managed to cross – especially later in the war, when a number of tricks were devised to do just that. 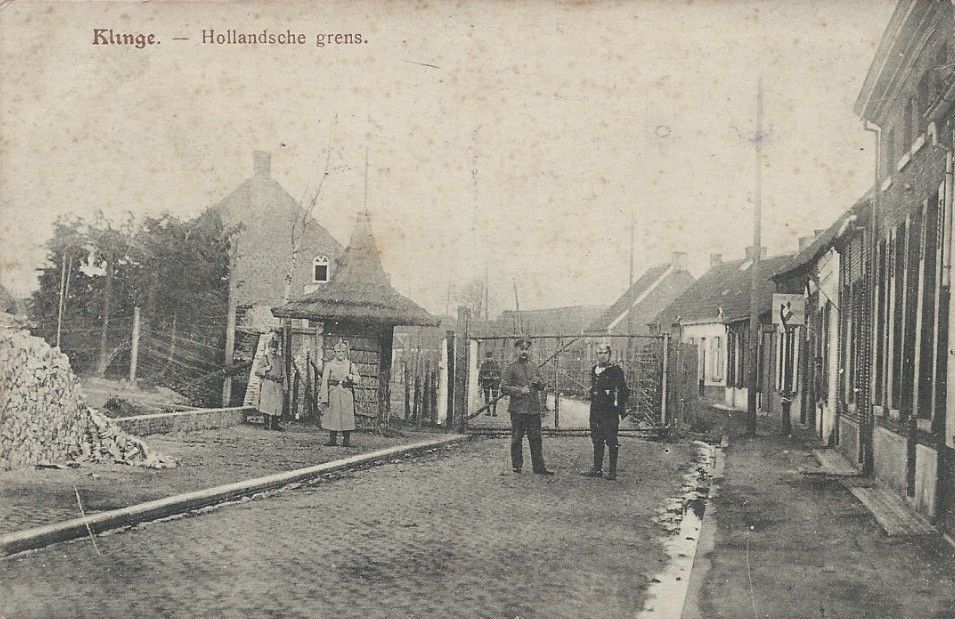 The Wire of Death followed the national border and sometimes ran straight through border buildings, such as in Clinge/De Klinge (source: www.delcampe.net).

Nowadays, a cycling route runs past the locations of the Wire of Death from Knokke to Drielandenpunt. You can also pass through the Zeeuws-Vlaanderen part of the route this way. At the Isabella Port, there is a monument that commemorates the deadly blockade. It is an abstract representation of the wire: a line that runs through the landscape via points of light. Would you like to know more? There is also a short video about the Wire of Death that you can watch.

Wherever there are strict border controls, there is smuggling, everything crossed the border on a large scale: tobacco, fuel, soap, but also people and letters. It was risky. Smugglers ran the risk of being shot and the Wire of Death claimed many victims. The smugglers soon came up with a way to dodge it. They made a collapsible insulated window of four planks that they could easily carry around with them.

The war was also fought at sea. Despite the fact that the Netherlands remained neutral, Germans did attack Dutch ships. Usually (at least until after the war) this was either denied or it was said that the ship could not be recognised as neutral. For instance, a Red Cross ship was torpedoed.

German submarines were active and the waters became riddled with sea mines. Fishing boats ran into them and sometimes they washed ashore. The fact that the mines were life-threatening was not always understood. People were after the metal and tried to take it back with them. In 1914, nine people were killed during the dismantling of three sea mines near Westkapelle. The victims are buried in the churchyard under the Westkapelle lighthouse. You can also watch this short video clip. 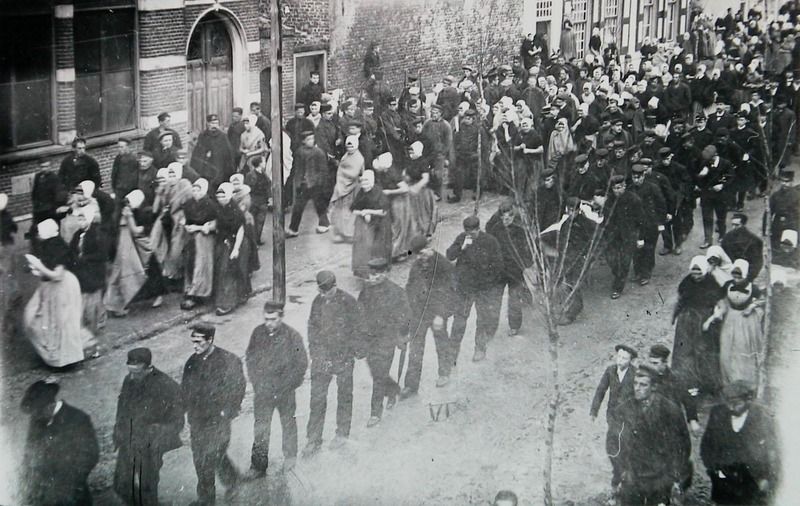 Burial of the victims of the exploded mine in Westkapelle (ZB, Image bank Zeeland).

During the First World War, planes were used in battle for the very first time. This method of warfare was still in its infancy. The technology left much to be desired and navigation was by no means perfect. German and English planes regularly violated Dutch airspace and the English in particular often dropped bombs in Zeeland by mistake. Here too, it took a long time before the British government was prepared to own up to these mistakes. Several people were killed and wounded during the mistaken bombings. The mistaken bombardment of Zierikzee in particular, in which six bombs were dropped, caused a great deal of devastation. 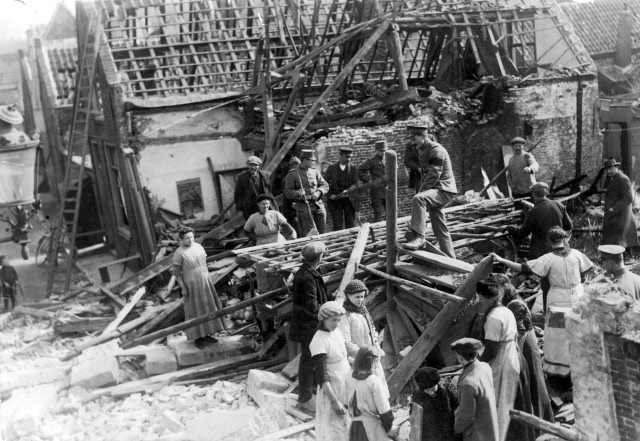 Destroyed and burnt houses in the Molenstraat as a result of the mistaken dropping of six bombs by the English (ZA, Image bank Gemeentearchief Schouwen-Duiveland).

As if the war itself was not bad enough, a pandemic also broke out towards the end of the First World War: the Spanish flu. The disease traveled with the military transports from the United States and spread in the Netherlands mainly via the military barracks. In Zeeland, the first reported cases of those who fell sick were also military personnel. After that, the disease quickly spread to the civilian population. Schools were closed to accommodate all the sick. Not many people died of the flu in the first wave, but the second wave struck harder and claimed many lives in Zeeland.

At the end of the First World War, Belgium demanded two Dutch territories (South Limburg and Zeeuws-Vlaanderen) as compensation for the damage they had suffered. This way, they would have a better defensive buffer against future invasions and at the same time gain control over the Westerschelde. The people of Zeeuws-Vlaanderen, however, very much preferred to remain Dutch and rallied together in exceptionally active protest committees. This anti-annexation movement carried out all kinds of campaigns and produced a protest song that eventually became the Zeeuws-Vlaanderen anthem. The message was that although Zeeuws-Vlaanderen was a separate country, it was still a country that belonged to the Netherlands. When Belgium stepped up the pressure, the Zeelanders deemed it even more important to show that they were a united front. That is why the Zeeland anthem was also composed. No matter how much the population did their best, they had no say in the final decision. The decision was taken in the corridors during the peace talks and turned out to be in favour of the people of Zeeland and Flanders. Their region was allowed to remain a separate territory within Zeeland.