De Ramp (The Disaster) that is how the flood disaster of 1953 has come to be known by the majority of the Zeeland population. It is so engrained in the collective consciousness that no added words are required. It began on 31 January 1953. A fierce north-westerly storm raged over land and sea. In itself, this did not give cause for alarm. But around half past 10 that evening, the tide was supposed to be low and the water level was still at high tide (because it was a spring tide and the wind had driven the water up from the North Sea). This combination proved fatal. While many Zeelanders slept, the dikes broke in multiple places. Only a few people who had been warned had taken precautionary measures on a limited scale.

It was mainly the polder dikes on the south and east sides of the islands that were the first to be flooded. This was because the water in the estuaries far inland had risen steeply. This is also where the lower and less well-maintained dikes were located. Around half past three, the water reached its highest level (455 centimetres above sea level – as much as three metres above the normal flood level). Dike breaches occurred in dozens of places. Goeree-Overflakkee was almost completely under water. In Zeeland, the seawater poured into the polders primarily on Schouwen-Duiveland, Sint-Philipsland, Tholen and parts of Noord-Beveland and Zuid-Beveland. On Schouwen-Duiveland, only the dune area at Kop van Schouwen and a number of polders near Zonnemaire were spared. Many people were caught unawares in their sleep. 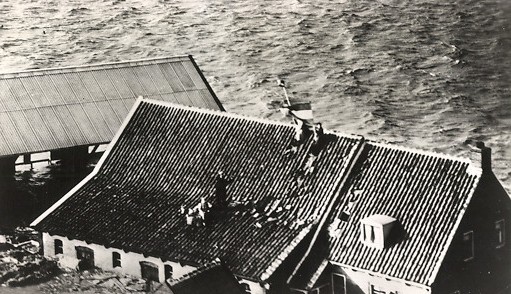 Escape and the first rescue attempts

People fled to higher ground. Sometimes to a nearby village or dike, but often to the attics or roofs of their homes. On Sunday morning, there were a number of smaller rescue attempts. Private individuals pulled people from their houses and fishing boats were also deployed. Cut off from the outside world, sometimes simply not competent or awaiting instructions ‘from above’, the authorities failed to act in many places.

On 1 February, the water had barely subsided and the second flood rose even higher. Many people had no choice but to flee once again to a place as high up as possible. This new treacherous onslaught of water proved even more deadly.

In total, 1836 people lost their lives in the Netherlands as a result of this flood. There were 873 victims in Zeeland. In the province, 125 polders with a surface area of almost 40,000 hectares were flooded. Many people died during the second flood of Sunday afternoon, especially on Schouwen-Duiveland (534). On the island of Tholen, Stavenisse was hardest hit. The dikes broke over a length of 1,800 metres, claiming 156 lives.

On the road between Sint-Maartensdijk and Stavenisse stands the ‘Zeemonster’ (Sea Monster) monument, which commemorates the 1953 flood disaster. On one side, the artwork looks like a fish, and on the other represents a monster. According to Gerrit Bolhuis, the maker, this ambivalence is characteristic of the relationship between Zeelanders and the sea. It stands on a spot where several victims were found after the disaster. Next to the monument, a marker indicates the water level during the disaster, and in the far distance, you can see the restored dikes. 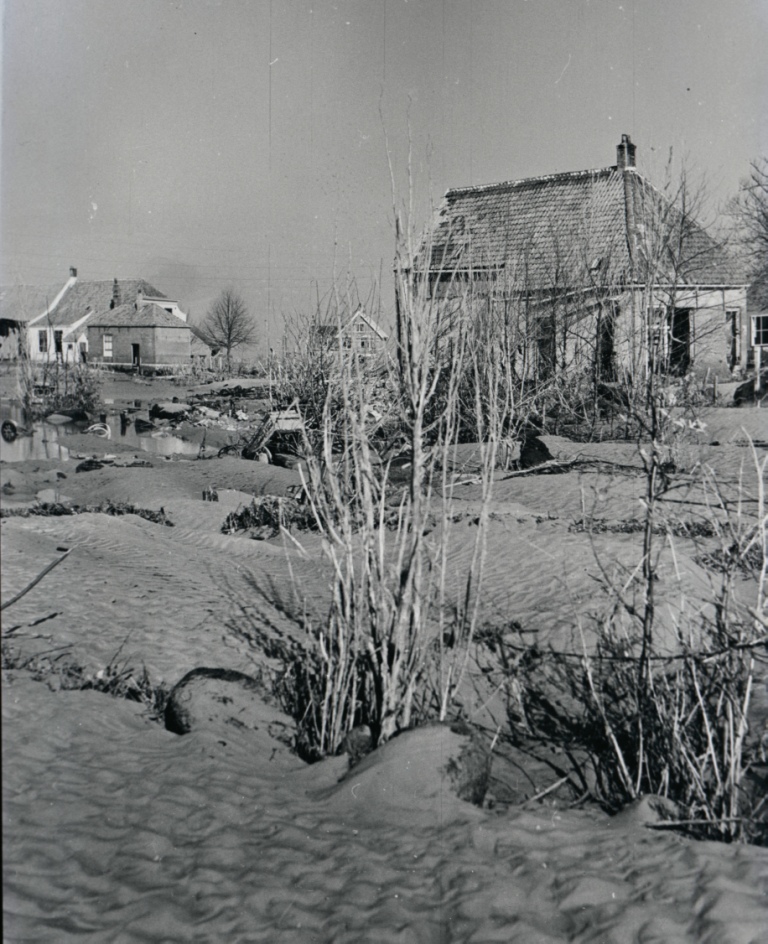 It was only from Monday 2 February onwards that large-scale emergency support efforts got underway. In the days that followed, extensive international aid also arrived. Nearly 100,000 people had to flee the water and were evacuated. They were often given shelter by host families who offered this voluntarily. One month after the disaster, more than 72,000 people were still staying at their evacuation addresses. By October 1953, 11,000 people had still not returned. Norway, among others, donated wooden emergency houses to the Netherlands. You can visit one of these emergency homes at the Streekmuseum De Meestoof in Sint Annaland.

Dike breaches amounting to 3.5 kilometres, occurred in Zeeland as a result of the disaster. It caused damage to a total length of 38 kilometres of dikes in Zeeland. The restoration of the dikes began quickly. In the beginning, it was almost all manual work (sandbags). Modern means were soon available. The largest dike breach was the Schelphoek on Schouwen. It was 525 metres wide and 37 metres deep at its deepest point. In many places in Zeeland, you can still see traces of the dike breach because there are creeks on the shore side. This is also the case at the Schelphoek. The old dike was not repaired here (the hole was too large) but a ring dike was built further inland. From this new dike, you can clearly see what is left of the old dike (and consequently also the gaping hole). The creeks are now surrounded by a nature reserve that is very inviting to walk around in. 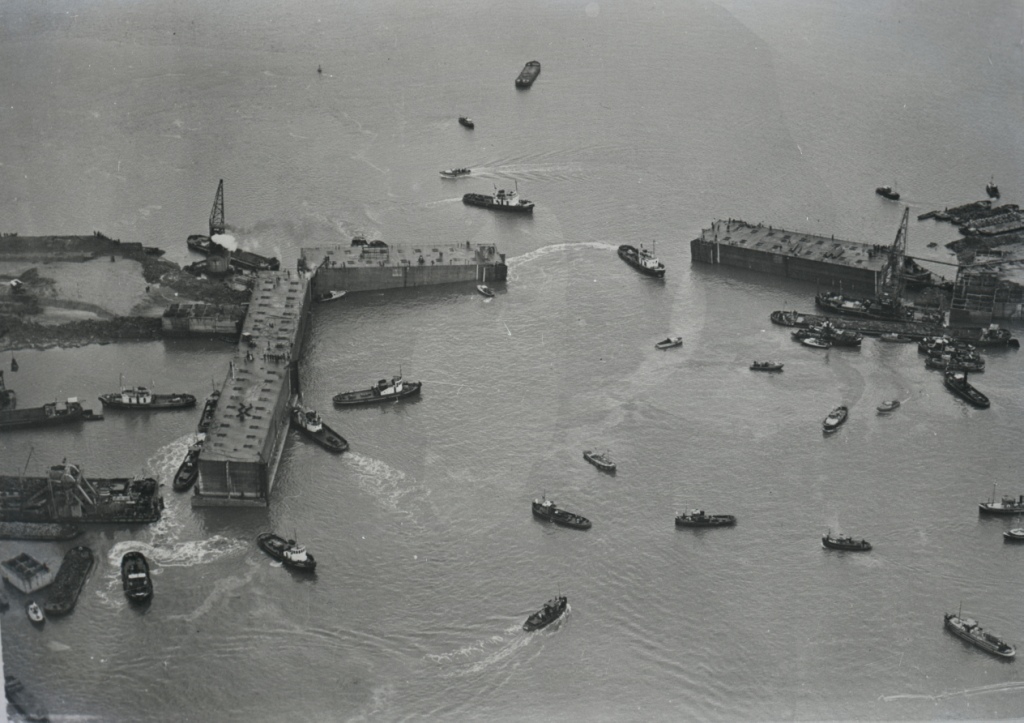 In the night of 6 to 7 November 1953, the last dike breach at Ouwerkerk was closed with four caissons (types of large concrete blocks in chambers). This attracted a lot of attention and the cheering after the closure lasted for several minutes. Such caissons have been used at other places in Zeeland (you can still see one at Schelphoek and two on the beach at Rammekens). But the best known caissons are undoubtedly those at Ouwerkerk. This is because the Watersnoodmuseum is located here in the caissons themselves. Each one is sixty metres long and twenty metres wide, and each has its own theme. You can learn the facts about the disaster, but also about many personal stories. These are often told using personal gifts. There are entire histories behind a simple suitcase or a commemorative pin. They also look towards the future in which climate change could once again cause so many problems with water.

The impetus for the Delta Plan

The flood disaster forced the authorities to face the facts. Not enough maintenance had been carried out and the dikes were far from adequate. People came to realise that this could not be allowed to happen again. Drastic measures were needed to protect people, animals and land. In the decades following the flood disaster, the Delta Plan was carried out. Dikes were reinforced and estuaries closed to prevent another disaster.