Zeeland was Roman territory for a very long time. Traces of the Romans have been found in various places in the province, but nowhere as many as in Aardenburg. This was an important site in the coastal defence of the Roman Empire.

Nowhere else in Zeeland has so much archaeological research taken place as in Aardenburg. This was no doubt due to the enthusiasm of the first provincial archaeologist of Zeeland, engineer Jan Trimpe Burger, who even moved to Aardenburg for this purpose. 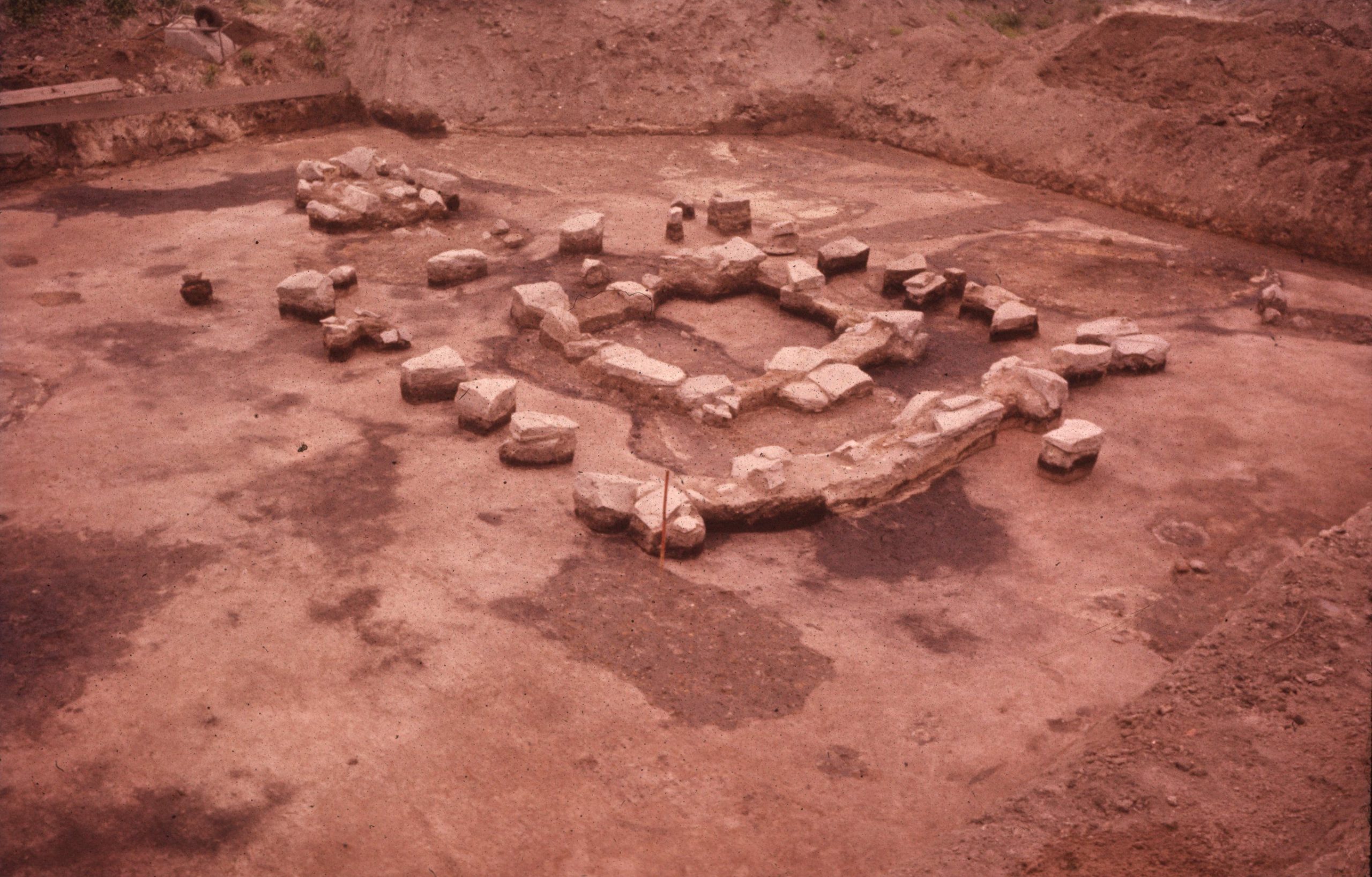 Remains of the stone foundation of the small temple.

Roman Aardenburg covered an area of about two square kilometres, roughly from the Draaibrugseweg in the north to the Schependomseweg in the south. The military fortification lay at the central point in this area, approximately by Sint-Bavostraat and Burchtstraat.

The military fortification was modified regularly over the years. All that is left of the first fortification from 170 AD are a few remains of the buildings. In the years that followed, a second castellum (fort) with an earthen defence wall, large headquarters, barracks and a small temple were built. The foundations of this small temple can still be seen in the garden of the Gemeentelijk Archeologisch Museum Aardenburg (the municipal archeological museum). After the camp was destroyed, it took about twenty years before a third fort was built. It had a stone defensive wall with round towers and a fifteen-metre-wide moat. This was to be the last fort. It remained in use for about thirty years.

In the centre of Aardenburg you can still see fragments of the fort’s foundations in several places. More detailed findings have also been made. A particularly special remnant of the former occupancy is a part of the wall decoration of the inner sanctum where the holy banners hung. 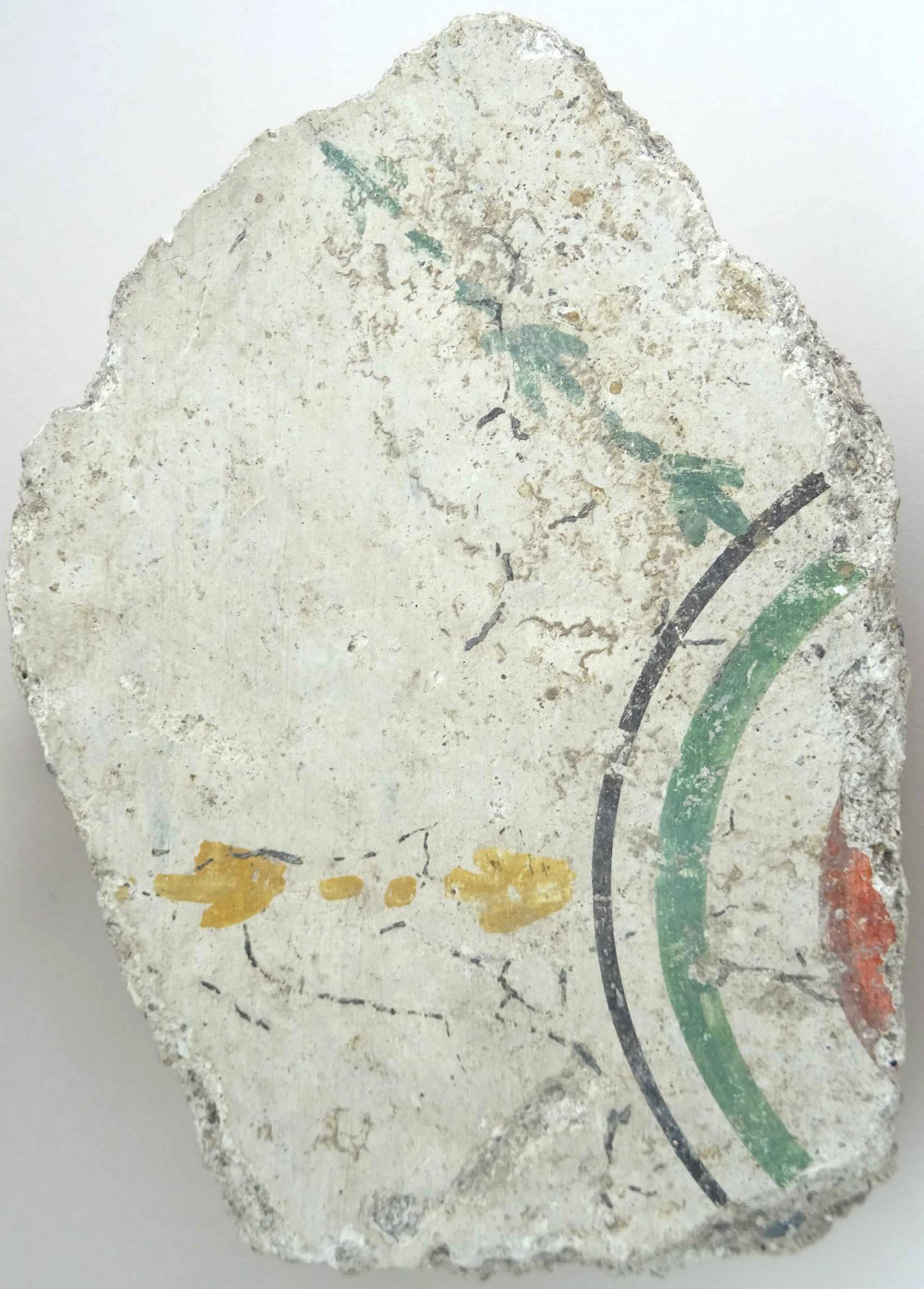 The fort and the troops

The fort served as protection against raids from the sea. The Roman Empire had an extensive defence network along the coast from the mouth of the Rhine at Katwijk to northern France, and Aardenburg formed part of it. Some three hundred soldiers could live in the forts. This included horsemen as well as foot soldiers. The horsemen were able to quickly stop any incursions and the men provided additional reinforcements.

Not everything revolved around military matters. There was also normal daily life without the turmoil of battle. Houses stood there, there was a bathhouse, a streetscape, watercourses, meadows, fields and a burial ground with cremation graves. Traces of this daily life also include, for example, food scraps. Thanks to recent excavations, we now know that the Romans in Aardenburg definitely ate cherries, plums, walnuts and hazelnuts. Those first three were even introduced here by the Romans themselves. Wall decorations have also been recovered. The Romans were fond of working with marble, but this was difficult to obtain in outlying areas such as Aardenburg, so they came up with creative solutions. The walls were painted in a marble pattern. Another special finding is that of an ear spoon, which was used in much the same way as a modern cotton bud.

There was an area in Aardenburg that was taken up entirely by crafts and industry. Especially shellfish were processed there. The remains of around 26 ovens have been found, as well as numerous dumping sites for mussel shells. Romans made a kind of fish sauce (allec) from shellfish. It is quite conceivable that the Romans already lived and worked here in the fish sauce industry before they established a military presence. Aardenburg was most likely an important regional centre. The fact that Aardenburg was well connected to the rest of the Roman Empire is also proven by the fact that (remains of) amphorae that were used to carry goods from other Roman regions have also been found, such as a fragment of an amphora containing olive oil from southern Spain. 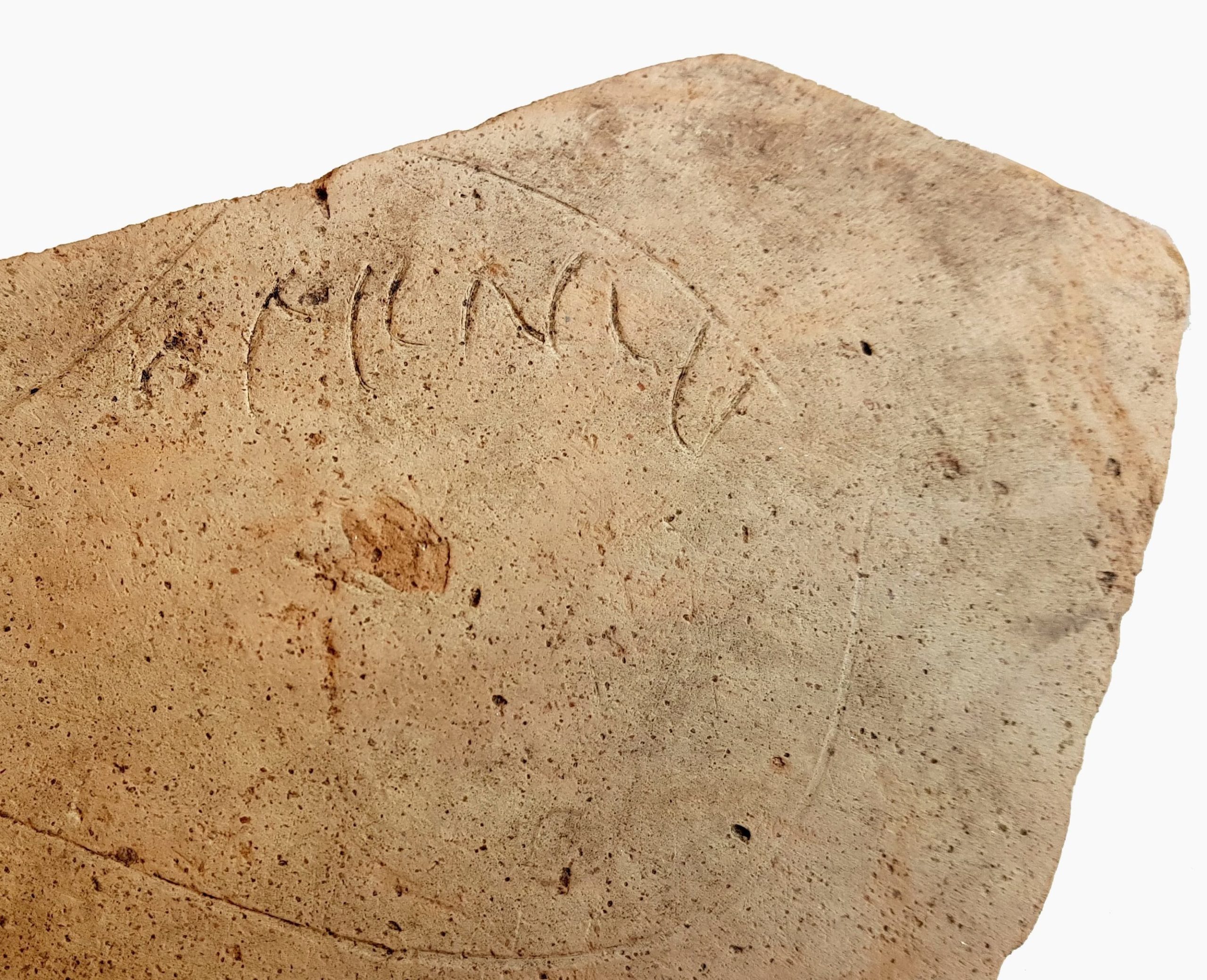 Graffito on an Aardenburg amphora.

It is highly likely that earthenware was also produced in Aardenburg. Two earthenware moulds have been found which could have been used to make a bird figure from terracotta or clay. Such figurines were often used as offerings in temples, but they may also have been children’s toys.

An enormous amount of artefacts have been found during the excavations in Aardenburg. Most discoveries from the Roman period can be viewed in the museum in Aardenburg. It has all kinds of pottery, such as bowls, plates, mortars and utensils made of bone and metal. By linking these objects to stories of fictitious Roman citizens, they bring the history of Roman Aardenburg to life.