At the end of the seventh, beginning of the eighth century, Zeeland was flourishing economically thanks to the production of salt and wool. This was the time that Vikings were plundering the European coast and they also set their sights on Zeeland. As a reaction to this, ringforts (in Dutch ‘ringwalburgen’) were built in Zeeland. There is still not much known about the construction of these defence structures. What is not unclear are the traces that they left behind, not least because reconstructions have also been made.

The Schelde estuary was the target of numerous attacks. Walichrum (a settlement near Domburg) was raided and Zeeland was even in the hands of the Vikings for a while. They carried out raids on England from here. Then Zeeland was invaded again by Vikings who had settled in England. At that time, the nature of the raids changed from short incursions to extensive forays further inland. The Vikings mainly came here to steal sheep.

The residents of the Schelde region probably built the ringforts to defend themselves against these raids. They did this in five locations in Zeeland: in Oostburg, Oost-Souburg, Middelburg, Domburg and Burgh. Maybe even the Roman castellum of Aardenburg was partly reused as a fort. It is not known for sure who built the strongholds. Most likely, the initiative lay in the hands of local rulers and monastic orders and the locals carried out the work. 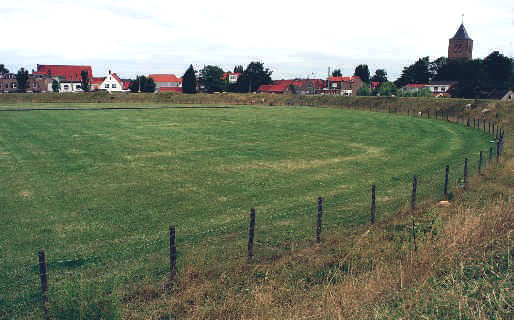 The ringforts were relatively easy to build. They were frequently built on high ground. Most likely, a stake was driven into the middle of this terrain and circles were drawn with the help of long pieces of rope – the floor plan of the ringfort. A wide canal was dug and an earthen wall was erected with the soil that was excavated. A palisade was built on top of this. In some instances, use was made of the natural surroundings. Part of the Arne River in Middelburg served as a defensive canal.

Questions about the forts

Whether or not there was ever a battle against the Vikings from the ringforts remains unknown. It is also unclear whether the forts were all built in the same short period of time and if they were actually defensive forts. Why the forts on Walcheren are so close together and differ in size is also unknown. The Walcheren forts may have been built as symbols of power. And Oost-Souburg could have been a Viking base.

In the tenth century, people started living in the forts. They then became fortified settlements and lost their defensive function, although the Middelburg fort was kept in a more or less defendable state until the thirteenth century. Middelburg’s ring fort was located roughly where you now find the old town centre with the abbey. You can still see the round shape of the fort on the town map and in the street names, such as Burggang and Walplein.

Of all the circular forts in Zeeland, the one in Burgh is the most well preserved. Archaeologists have carried out extensive research there, and in the early 21st century the ringfort in Burgh was partially reconstructed. You can still clearly see the 50-metre-wide canal, as well as the palisades on top of the earthen wall. A wooden footpath has been laid out where the road in the fortified settlement probably used to run. This allows easy access to the ringfort.

Close to the ringfort, you can find Museum de Burghse Schoole. Here, a permanent exhibition has been set up around the ringfort and the Vikings. There is also a scale model of a ringfort. In the schoolyard next to the museum, there is a ‘folding bench’ where you can listen to stories about the history of Burgh and the ringfort.

There is also a short video about ringforts (and the one in Burgh in particular) made for the canon of Zeeland. 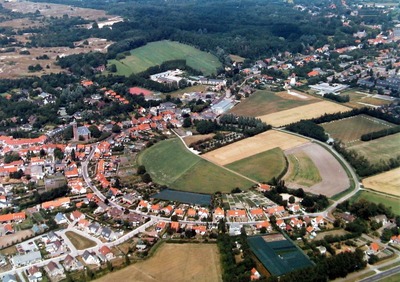 Aerial photo of Burgh with the site of the ring fort, circa 1995 (ZB, Beeldbank Zeeland, photo A. Dingemanse).

The ‘zuidburg’ that was built on Walcheren also gave its name to the village of Souburg. The ringfort of Oost-Souburg has also been reconstructed. An earthen wall encircles a large, empty field. Because this circular rampart is considerably smaller than the other forts in Walcheren, the presumption is that this could also have been a base for the Vikings themselves. Originally, this circular rampart had one gate. When the castle ceased to have a defensive function, people came to live there. The fort was then divided into four quarters. Four gates were added and two roads passed through the fort at perpendicular to each other. These were made of sections of tree trunks or planks. Archaeological excavations have even found traces of sewage pipes under this road surface. During the reconstruction, the rampart was rebuilt in its original state: with one entrance gate.

The circular rampart was built in the Carolingian era (eighth and ninth centuries). As a reminder of this, the annual market in Oost-Souburg is called Karolingenmarkt. On this day full of events, there is always a flea market on the ringfort grounds. 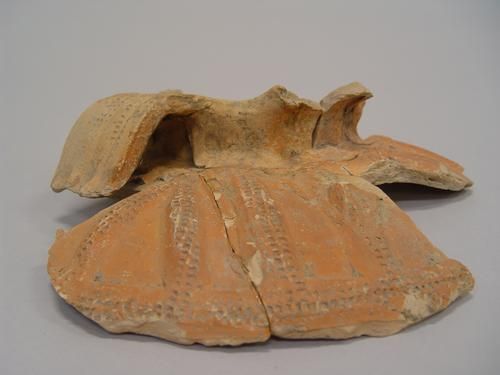 This village is also named after its burg: the Duinburg. The remains of Domburg’s ring fort are buried under the buildings and dune sand. Hardly anything can be seen of it anymore, but extensive archaeological research has made it clear that this must have been an impressive complex. In some places, the canal was 50 and the embankment 19 metres wide. This is the only Zeeland ring fort where objects have been found that point to contact with the Scandinavians. For example, a beautifully decorated buckle was found, which is now kept in the Zeeuws Archeologisch Depot. This is not direct evidence for the theory that Vikings may have built ringforts here. It could very well be an indication of trading contacts with the Vikings during times of peace.