After the flood disaster of 1953, it was obvious that doing something about the coastal defences in the Delta region was a matter of great urgency. That is why the Delta Plan was drawn up and the construction of the Delta Works soon followed. The design and construction was primarily concerned with safety and not so much with the economic ramifications of the construction for the region. Nature values were definitely not taken into consideration either. And then, after the successful completion of many of the Delta Works, it was time to build the Oosterscheldedam. This was met with an enormous amount of resistance. Closing off the Oosterschelde would mean the loss of a unique saltwater area. 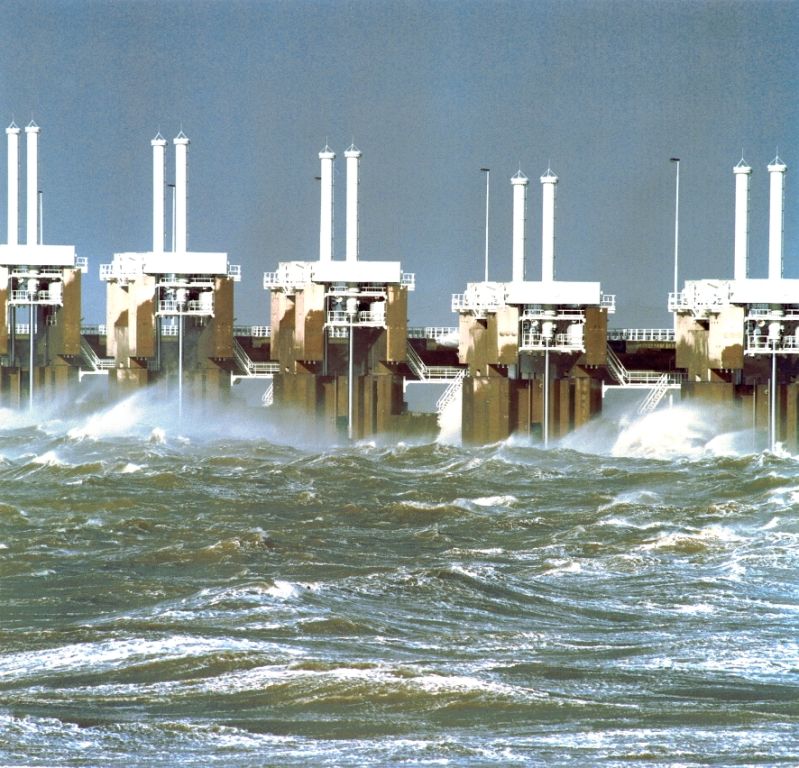 The first protest was already gathering momentum in 1968. Various special interest groups joined forces – from entrepreneurs to environmental activists. Fishermen, oyster farmers, special interest groups, environmental activists and lawyers joined forces. They united themselves in the Oosterschelde Study Group. With sound and technical arguments, they offered a counterweight to the plans that the Directorate-General of Public Works and Water Management (Rijkswaterstaat) had for the Oosterschelde.

Despite the protests, construction started. Artificial islands in the Oosterschelde estuary were needed for the construction of the dam. In 1969, Rijkswaterstaat made a start with the construction of the first island. In the same year, the protest group issued a report. It stated that the costs (including costs for damages) of the dam would amount to 2 billion guilders, whereas raising the 200-kilometre dike behind it would only cost 600 million guilders. At the same time, the political winds blew in favour of the environmental movement. Grave environmental scandals and political support in the form of the Club of Rome brought about a change in the attitudes of the general public.

In 1974, a small majority in the House of Representatives voted against a permanent dam. In 1976, the final decision was taken to provide the Oosterscheldedam with a number of sluices that only needed to be closed during extremely high water levels. And so the Oosterscheldedam became the Oosterscheldekering (barrier). This kept the Oosterschelde salty and also kept the tidal force intact. This is also why the Philipsdam and the Oesterdam were built on the east side of the Oosterschelde. They reduced the surface area of the Oosterschelde so that the tidal force would be stronger. The Oesterdam is a hotspot for water sports nowadays. A lot of surfing goes on here and, when the wind is right, kite surfing as well. Apart from that, it has also been a culinary magnet for a number of years now. At low tide, people scour the area for oysters and other shellfish. This would never have been possible without the opening of the Eastern Scheldt Barrier.

The construction of the Oosterscheldekering

Preparatory work for the construction had already taken place when it was still assumed that the barrier would be a dam. Sandbanks had already been raised, for one thing. But a lot of new work needed to be done. A bailey bridge was built between Schouwen-Duiveland and Noord-Beveland. This temporary bridge connected the islands with the working island of Neeltje Jans, where the storm surge barrier was being built. The working island was more than 200 hectares in size, had its own power station, concrete factory, asphalt plant, work docks and roads. The ir. J.W. Topshuis engineering building was built on the northwestern tip. 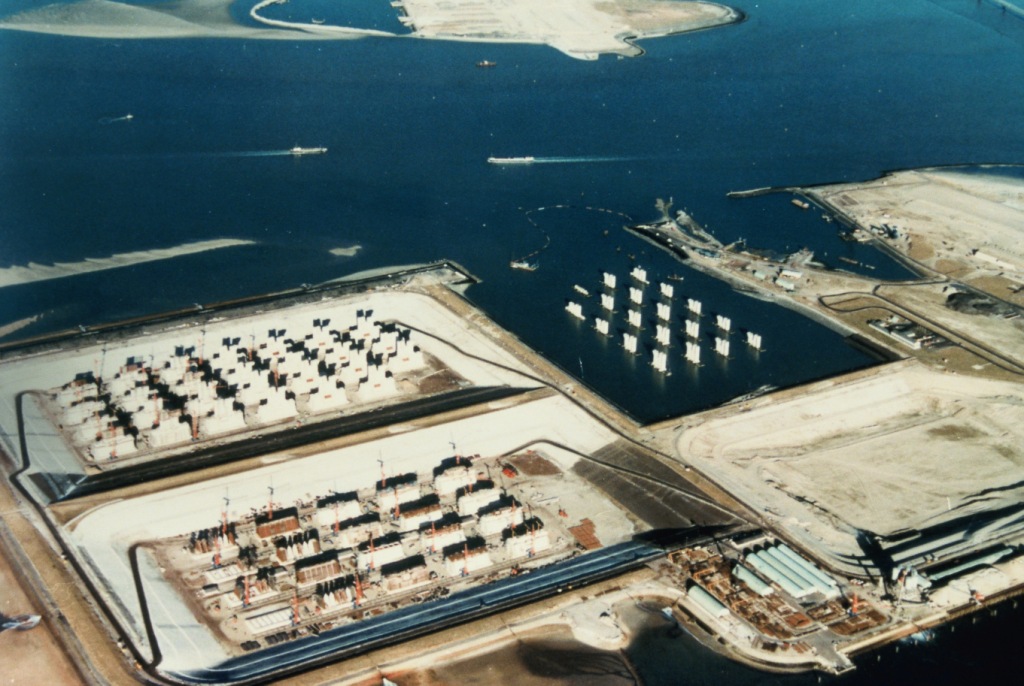 Nowadays, these construction pits are completely submerged and mussels are cultivated there. You can see the drums from the waterside and buy the mussels at the fish and mussel shop on Neeltje Jans.

Two extra pillars were added to increase safety. One of them can still be seen in the water at Neeltje Jans. An outdoor sports organisation maintains this pillar and you can paddle to the pillar under their supervision and then climb the ‘klettersteig’ – the scaffolding attached to the pillar.

Because the Oosterscheldekering was such a unique work of engineering, its construction was also unique. The equipment that was needed to build the flood barrier did not exist at that time. Which meant that ships had to be built especially for the construction. This led to considerable additional costs that amounted to around 350 million guilders. The Ostrea, Mytilus and Cardium ensured respectively that the pillars were transported to their places, that the sandy soil was compacted using vibration and that the foundation mats were laid on a flat seabed. 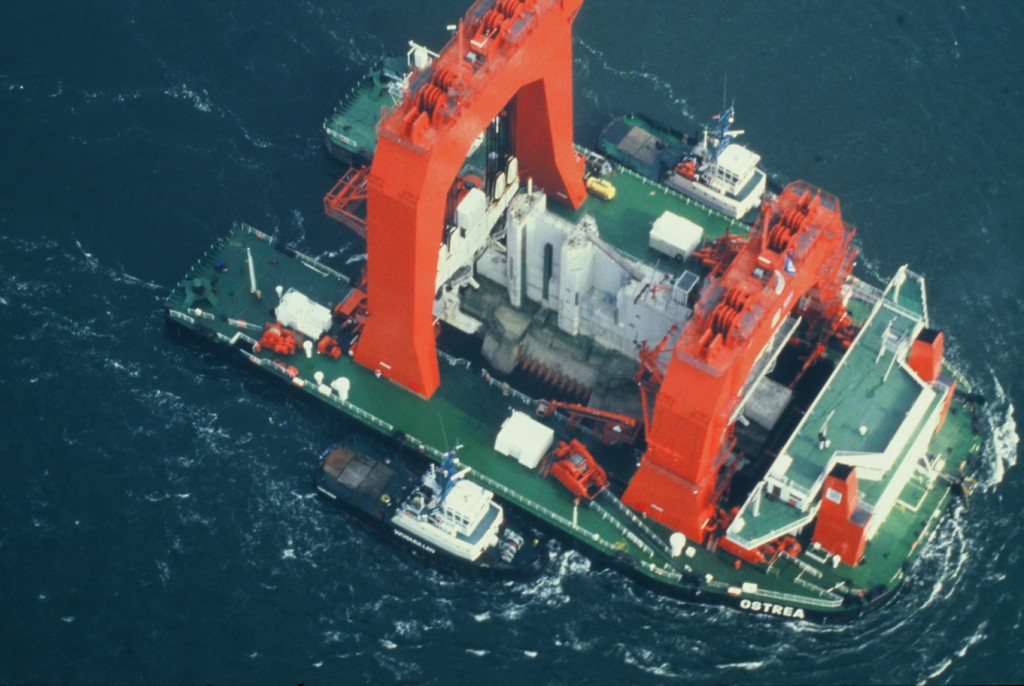 The Ostrea transported the pillars to their final location (Image bank Rijkswaterstaat).

From the Banjaardstrand on Noord-Beveland and beach De Schaar on Schouwen-Duiveland, you have a fantastic view of the Oosterscheldekering. If you want to see the barrier up close, then you can visit Neeltje Jans. The island has not been used as a working island for many years. The nature and recreation have taken over the island. There is a permanent exhibition in the Topshuis which you can visit free of charge. Nowadays, you can also find Deltapark Neeltje Jans on the island. In this amusement park, there is plenty of fun to be had with the water and you can also take a look inside one of the pillars. Last but not least, you can also wander around the island. There are several walking routes (including paved pathways for people who have difficulty walking) that take you through the dune landscape. Adventurous hikers can also cross a slufter (tidal stream).