In the most unexpected places in Zeeland, you can suddenly see hills rising haphazardly above the landscape. Some are no more than a raised spot in a meadow, but there are also beautiful cone-shaped examples that stick up proudly ten metres in height. They are commonly called ‘Vliedbergen’, as in ‘terp hills’. These are the remains of what were once motte castles. About forty of them can still be found in Zeeland.

The first motte castles were most likely built in Zeeland as early as the ninth century, but most of the remains that you can still see today date back to the twelfth and thirteenth century. Zeeland’s ambachtsheren (ruling landlords) built the motte castles to defend their territories. Typical of motte castles is the hill (motte) that served as the foundation for the defensive tower. These hills were built in Zeeland from the clay that was locally available. A circular moat was dug out and the soil that was excavated was then piled up in the centre of the circle. Remnants of such moats have been found at many mottes. Often, you can still see a dent in the land at the foot of a terp hill even to this day. 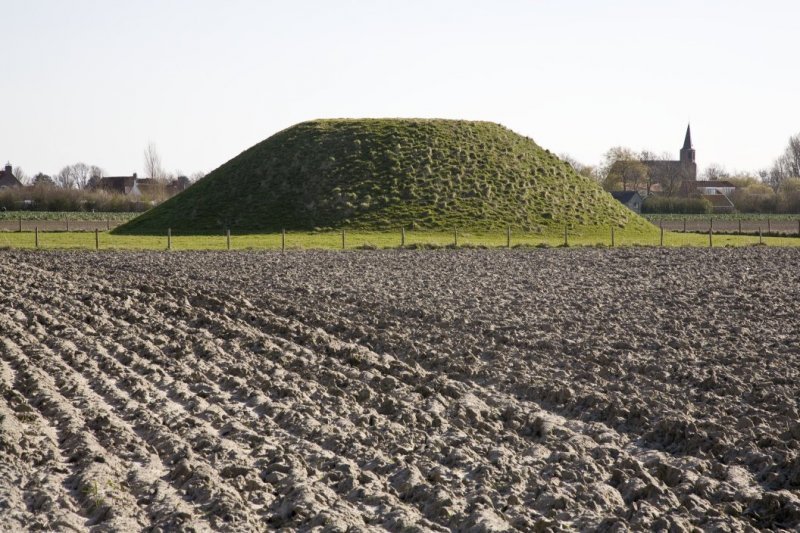 Vliedberg on the Snouck Hurgronjeweg in Gapinge (Image bank Cultural Heritage Agency of The Netherlands, photo Bert van As).

The tower on a motte was made of wood. That deteriorated and then the hill was all that remained of it. The original purpose of the motte was soon forgotten. They were often seen as former refuges in the event of floods, which is why such a hill is still often called ‘a vliedberg’ (refuge hill of a terp hill). Other theories also circulated. For example, it has long been thought that they were sacrificial hills. Some mottes had their own myths associated with them as to their origins. For example, one of the terp hills near Vlake was thought to have fallen from the apron of a giant.

Apart from incidental traces in the ground, no traces of the towers of motte castles have been preserved. But there are written sources and there are also Norman mottes depicted on the Bayeux Tapestry. From these, you can deduce that the mottes often had a palisade with a fortified tower at least one storey high on the inside. These could only be reached via a bridge. At the Terra Maris Museum voor Natuur en Landschap, a reconstruction has been made of a motte castle with a ten-metre high tower. It provides a good impression of what a motte castle might have looked like at the time. It is a favourite spot among children when they visit a museum. 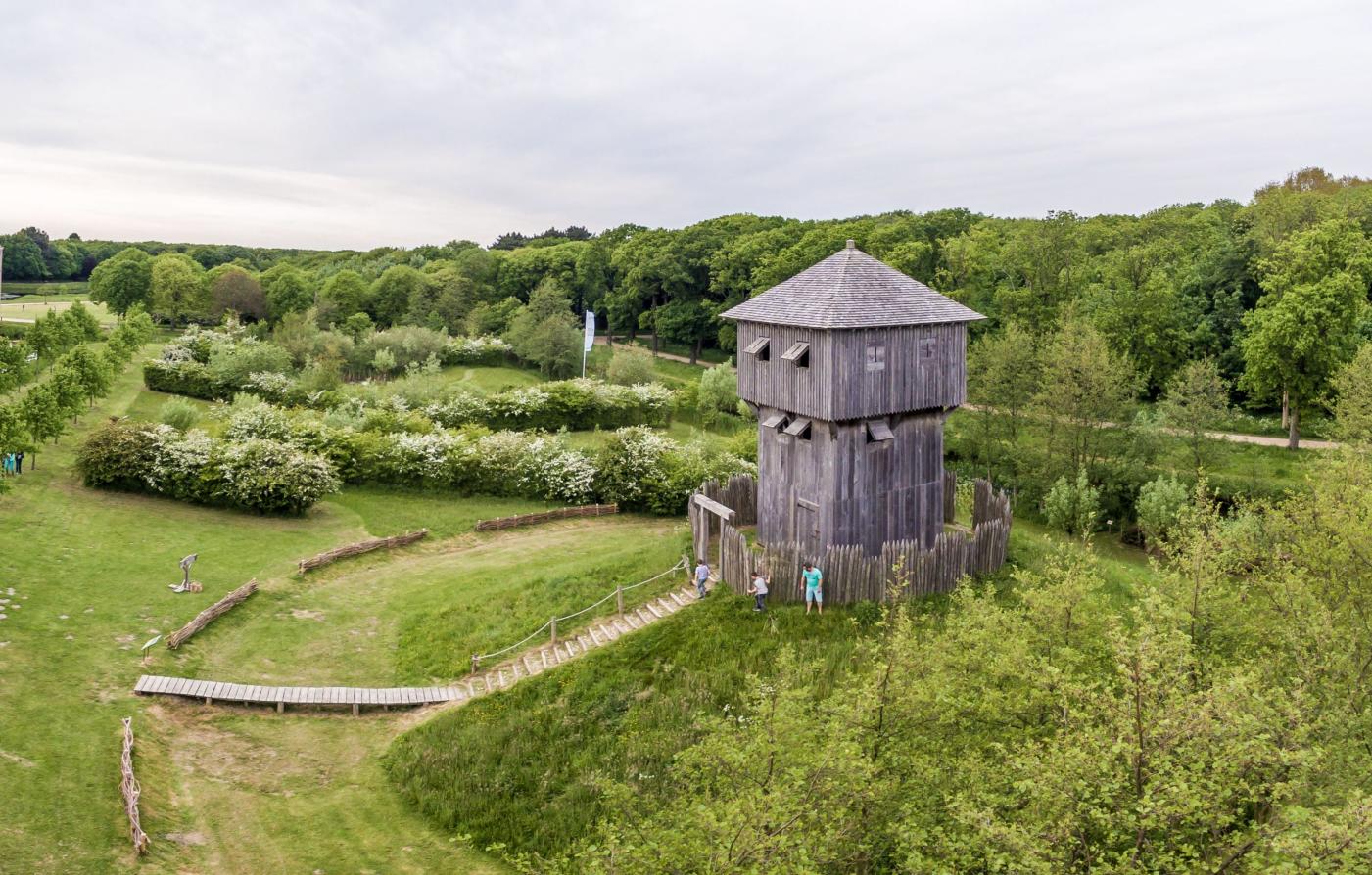 Around forty remnants of these hills are still left approximately eight hundred years after the construction of Zeeland’s motte castles.

Over the centuries, many of these terp hills have disappeared. At the Nieuwe Erve country manor in Ritthemse, the soil from the terp hill was used to fill in a canal, for example. One of the first people to show scientific interest in these hills was the Netherlands ‘first professional archaeologist’ Cas Reuvens. He had an inventory drawn up of these hills in the nineteenth century and even took soil samples.

The ‘vliedbergs’ that remain today are carefully protected. A large part of them are owned and/or managed by Het Zeeuwse Landschap. Because of their vulnerability, the terp hill sites are not permanently accessible to the public, although in almost all cases, they can be easily seen from the road. 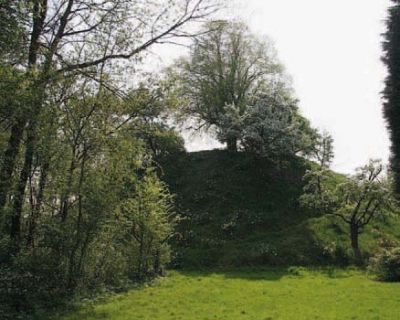 The highest terp hill in Zeeland is found in in Wemeldinge. This terp hill is a good twelve metres high and is slightly hidden between trees and bushes. Incidentally, the village also has a second hill with a church on top of it. Local ruling landlords often built a church next to a motte castle, and a village would then spring up in the vicinity. In that respect, Wemeldinge is a textbook example of how the ruling landlords went about their business. More information about motte castles and the ‘vliedberg’ (terp hill) near Wemeldinge in particular can be seen in a short film from the Zeeland canon.

The Mountain of Troy

The Mountain of Troy is one of Zeeland’s most famous terp hills. It is located just outside of Borssele. It has a long and impressive history. Once upon a time, this was the ancestral home of the powerful lords of Borssele. Around 1300, a mighty donjon (tower) stood on the hill and there was also an awe-inspiring ring wall with buttresses. A bridge led to a forecourt where several buildings also stood. In Zeeland, only a few remnants of motte castles have been found, which makes this location even more exceptional. Ultimately, this compound was hit by a flood and the castle was destroyed. Only the Mountain of Troy survived it all. 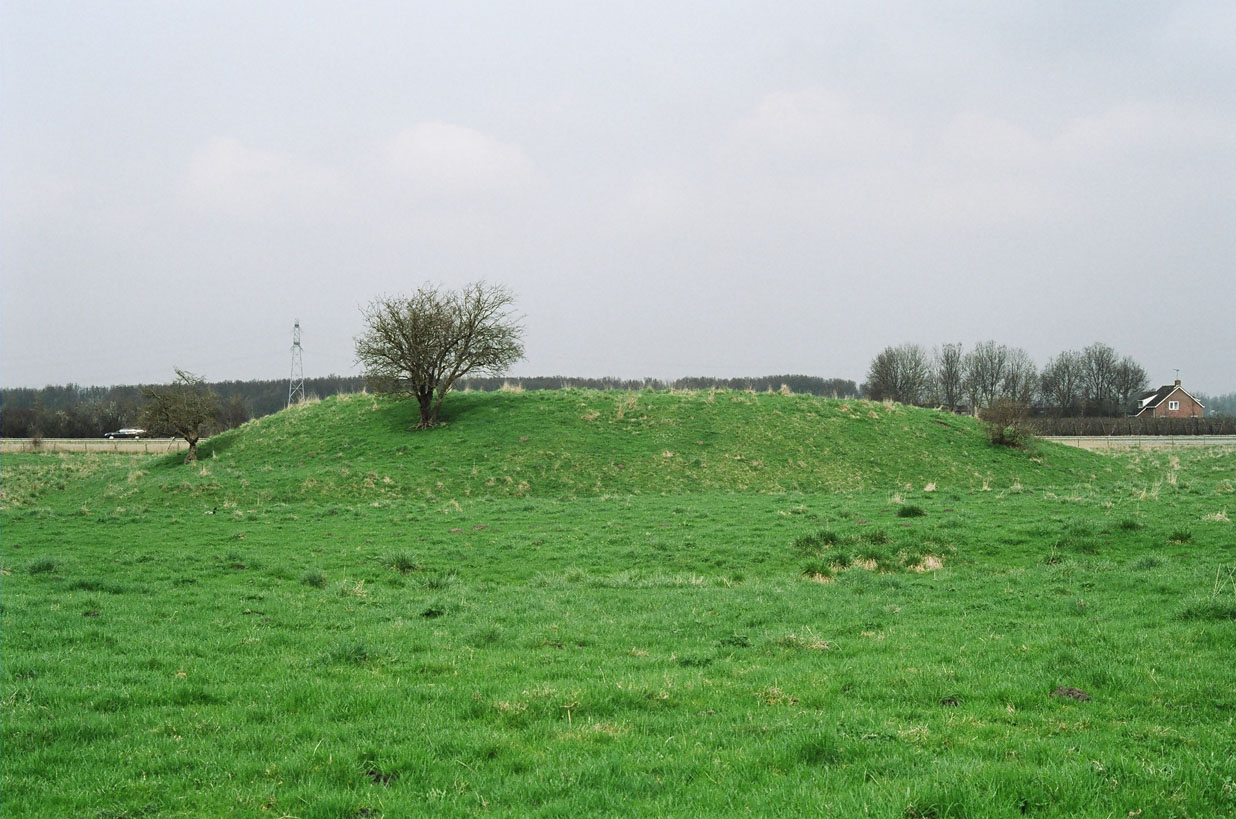 One of the earthen hills near Baarsdorp (photo Cumulus).

There was also a motte castle close to Baarsdorp that comprised two parts: a nederhof (lower courtyard) and a opperhof (upper courtyard). The lower courtyard contained a farmstead with a few outbuildings and a gatehouse. The upper courtyard was the actual motte castle with a tower and palisade on top. Small canals encircled the hills and to get from the lower courtyard to the upper courtyard, you had to cross a bridge over the canal. When you drive along the A58 from Heinkenszand to Goes, you can see two small hills nowadays, but hidden behind these small elevations in the landscape, there is a hefty amount of history and, because many traces of habitation have been found here, it is an important site from an archaeological point of view.