A primary school, street, holiday home or snackbar: in Zeeland they may all bear the name ‘paalhoofd’ (in English groynes). And on Walcheren, a bad set of teeth is also known as an ‘(oud) paalhoofd’ – an old groyne. Paalhoofden are commonplace in Zeeland. The beaches are inconceivable without the single or double rows of barriers. They serve as breakwaters that prevent the beach, dune line or riverbank from eroding. It is estimated that there are almost 100,000 of these barriers on the North Sea coast of Walcheren and Schouwen. We also see them on the Westerschelde, such as the Groot en Klein Paalhoofd near Bakendorp (Baarland), already mentioned in 1890, or on the former sea inlet Veerse Meer. 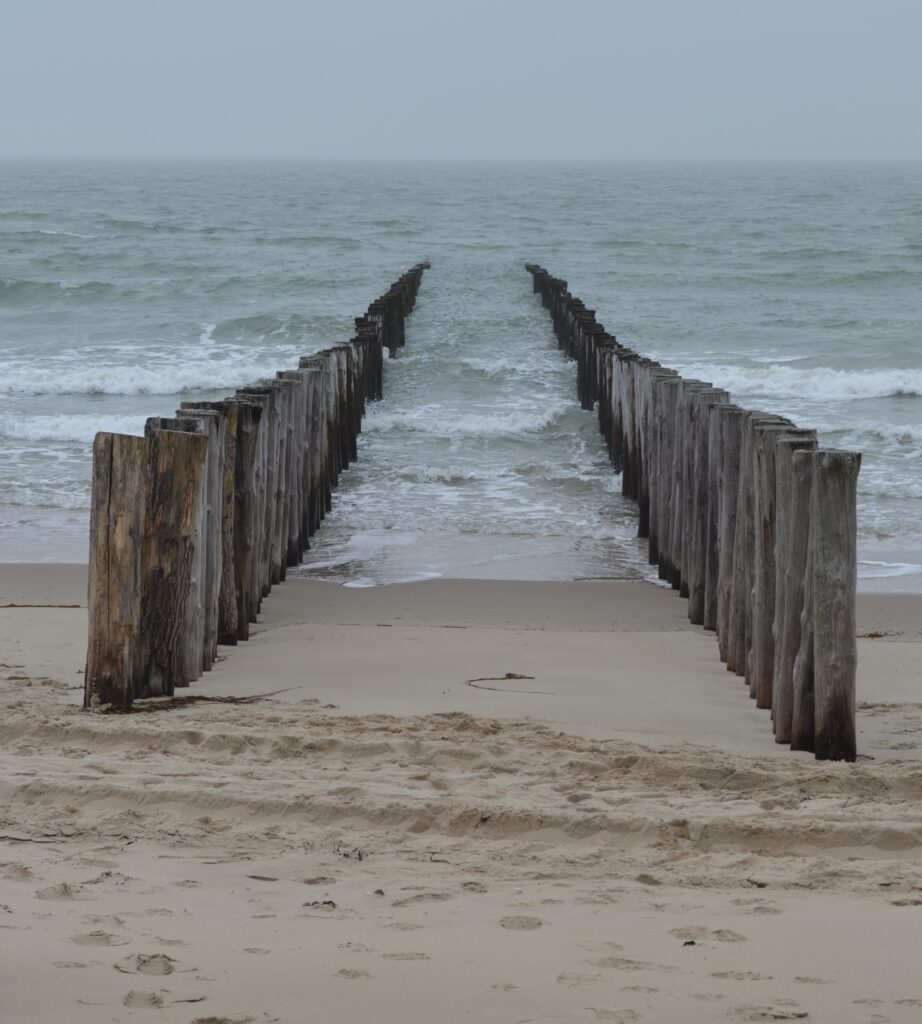 A groyne can comprise more than seven hundred individual posts, ranging in length from 3.50 metres to more than 4.50 metres and with a diameter of a few decimetres. They were usually made of oak, as this wood lasts at least 15-25 years. The distance between the groynes on the beaches is about 100 to 300 metres. Together with the beach and the dune coast behind it, they form part of the ‘natural main water barrier’.

The groynes are also important as a maritime ecosystem: a habitat for mussels, crabs, fish, starfish and other small marine creatures. Seaweed and kelp also grow here. Fish like to come here to forage. The current between and around the posts creates a good dynamic, but is also dangerous for swimmers. 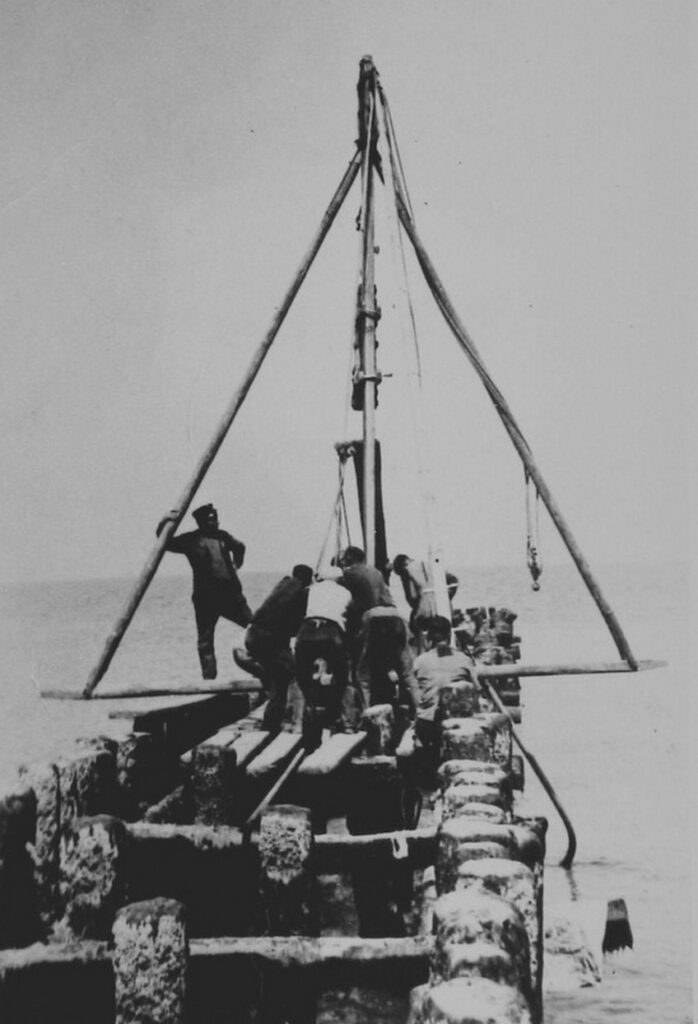 Driving in posts at a pier near Westkapelle (ZB, Image Bank Zeeland).

There are ‘ordinary’ and special groynes, such as the Zuiderhoofd or Grôôt ‘Ôôd at Westkapelle: a double row of posts with a pier walkway, one hundred metres long and 2.8 metres wide. This groyne, which was restored in 2011, dates back to 1907, but can be traced back to older predecessors.

The West-Zeeuws-Vlaamse coast between Cadzand-Bad and Breskens boasts the entire spectrum of coastal defences: dunes and dikes, stone dams, and groynes with wooden posts. Particularly noteworthy are the pileworks and camp-shedding at the tide port of Nieuwe Sluis to the west of Breskens, where the ‘Monument to the Zeeland Waterworker’ by Jaap Boekhout (1990) was erected.

The history of groynes goes way back. On the Schelde map of 1504, the first survey map of the Zeeland delta, we can see straightforward groynes near Zoutelande and Dishoek on the island of Walcheren. A much more extensive depiction can be seen on the Panorama of Walcheren by Antoon van den Wijngaerde (circa 1550). The installation of groynes now also served to protect the young Westkappel sea dike. Ships were also docked to the groynes.

Single groynes at Zoutelande and Dishoek on the Scheldte map, 1504.

At the start of the eighteenth century, people bagan to experiment with new techniques for defending beaches and dunes. Stone-encrusted groynes and ‘betuiningen’ (fencing) were installed and later, stone groynes and groynes with pileworks were mainly constructed. At the beginning of the nineteenth century, the pileworks gave way to stone groynes with single or double rows of posts. Open rows of posts without stone revetments appeared on Walcheren and Schouwen primarily after the Second World War.

A rethink on better methods of coastal defences was a matter of urgency due to the devastating effect of the naval shipworm. Around 1732, a serious epidemic of this mollusc, which ended up in our waters as a guest aboard VOC-ships returning from the East, raged in Westkapelle (and other parts of the Netherlands). Naval ship worms bore long corridors into wood, causing it to lose its natural resilience. Pileworks, groynes, brushwood stacks – the naval shipworm ate it all. People held special prayer meetings in 1732 to ward off the threat, but scientific research also gained momentum. It was not until the twentieth century that the naval shipworm could be effectively eradicated through the use of impregnated wood. 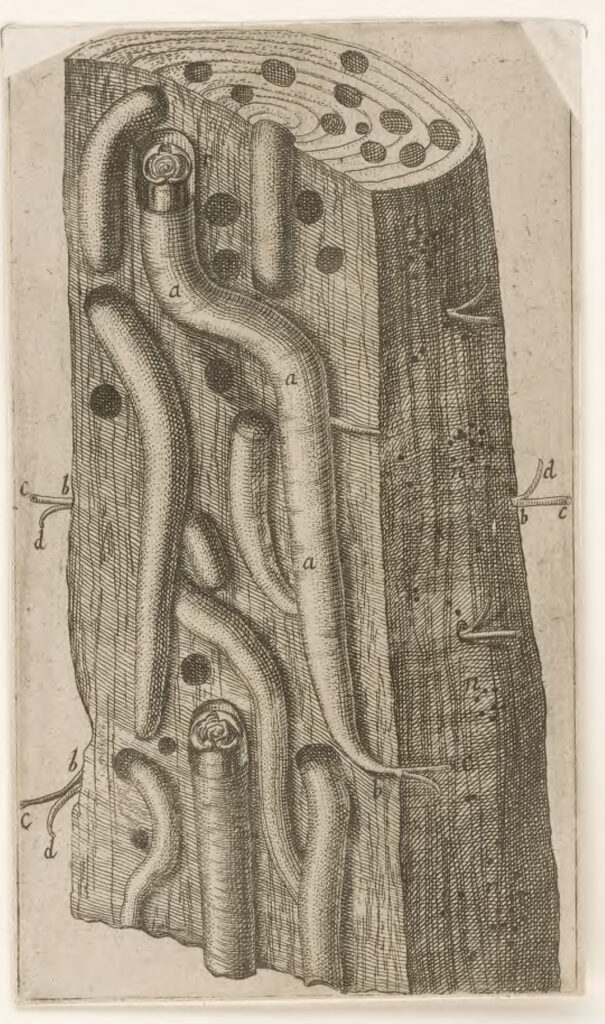 Shortly before 1800, a discussion erupted about the usefulness of groynes in protecting the beaches. This also had to do with the financial slump and scarcity of materials during the Batavian-French era (1795-1813). Maintenance of groynes and pileworks had become prohibitively expensive, as the wood had to be covered in nails to stop the naval shipworm.

In 1808, Zeeland hydraulic engineer Andries Schraver and his young assistant Abraham Caland managed to come up with a partial solution: sawing off part of the groyne posts. A number of groyne posts directly in front of Domburg were sawn off first. This practice was continued until around 1830, but its effectiveness was not really proven. Since 1855, new groynes have been built on the Walcheren beaches. 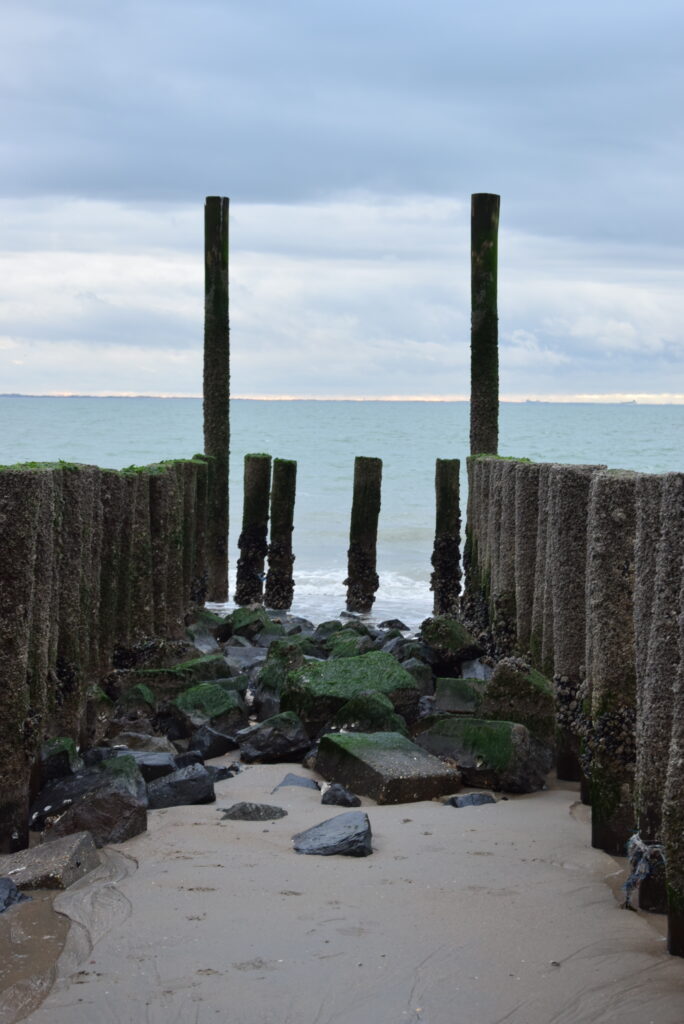 From 1990 onwards, after the Delta Plan, was completed, groynes were relocated and supplemented together with the new defensive method of sand suppletion. In order to preserve the coastline, layers of sand are deposited on the beaches every three to four years, which causes the groynes to temporarily disappear for the most part or entirely under the sand.

The groyne as an icon

In 2008, photographer and author Pauline van Lynden won the Zeeland Book Award with her book Donkere Palissaden (Dark Palisades). The Province of Zeeland subsequently placed the Zeeland groynes on its list of monuments. Ever since, enthusiastic reviewers and observers have referred to the groynes as ‘Zeeland’s Stonehenge’ or ‘beschuimde bulten’ (foamy lumps). Groynes are by no means a new source of fascination for artistic minds. Piet Mondriaan painted his abstract ‘Composition 10 in black and white’ (‘Pier and ocean’) in Domburg as early as 1915, a work that has since become classic, in which the Domburg groynes form a rhythmic whole with the waves and the starry sky.