One thing was clear after the flood disaster of 1953. Coastal defences had left a lot to be desired for far too long and that had to change. The Delta Plan was drawn up to make sure that a disaster of such magnitude could never happen again.

Why it went wrong

There was no single reason for the poor condition of the dikes. Maintenance had been long overdue. Governments had cut back on the maintenance of dikes due to the First World War and the economic crisis of the 1930s. Moreover, management of the dikes was extremely fragmented. Although the government had issued reports about the dangerous situation, the managers were not aware of it. Above all, people assumed they were safe. There had not been a flood for a long time (except for the inundation caused by people).

After the disaster, it took a while before restoration of the dikes got underway. At the same time, efforts were being made to prevent another disaster. People realised all too well that the safety of people, animals and land would have to be drastically improved. The Delta Commission was set up as early as February 1953. Using ideas and proposals that had already been made before 1953, the committee drafted a plan to reinforce the dikes (they had to be raised to the height of the Delta) as well as partially close off the estuaries in the Zeeland and Zuid-Hollandse delta. Implementation of the Delta Plan began in 1954 and was carried out by Deltadienst. 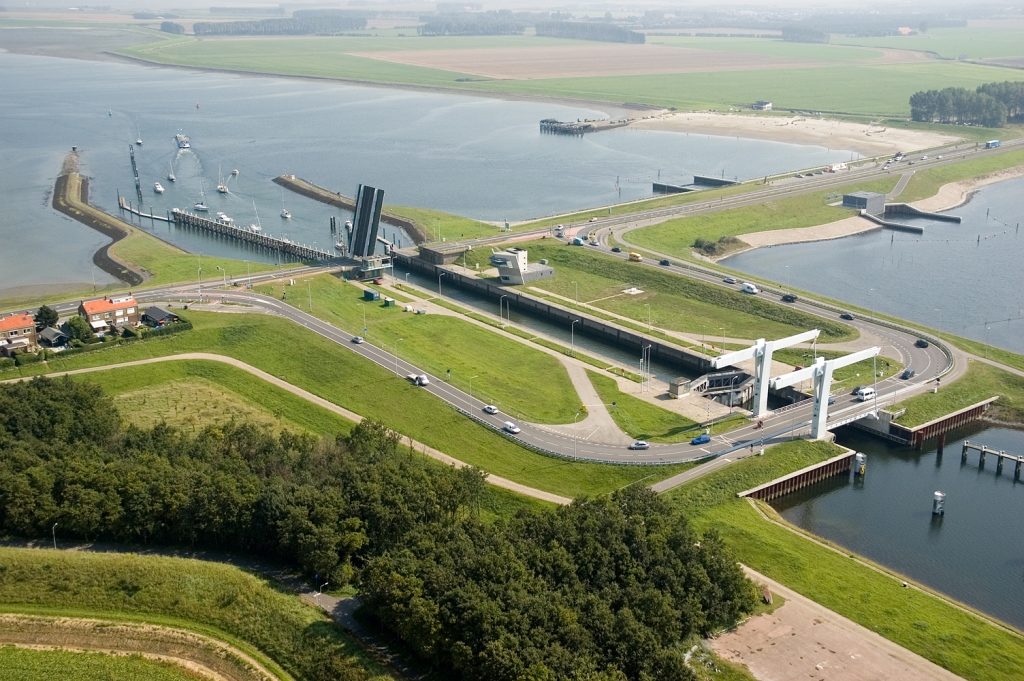 Zandkreekdam, 2008 (Image bank Rijkswaterstaat, photo Joop van Houdt). This dam connects Noord- and Zuid-Beveland and seals off the Veerse Meer on the east side.

In the years that followed, several hydraulic structures, now called the ‘Deltawerken’, were completed:

At the current location where the ‘Stormvloedkering’ (storm surg barrier) lies in the Oosterschelde, the original plan called for a dam be built which would completely seal off the Eastern Scheldt from the North Sea. This would have destroyed a unique nature reserve along with the mussel and oyster industry. After extensive protests, the plans were modified and a barrier with gates was built instead of a dam. The gates are only closed in extreme weather conditions and when the water level is exceptionally high. To ensure that the tides in the estuary would retain enough force, additional dams and sluices were built mainly on the east side of the Eastern Scheldt: the Philipsdam, Oesterdam, Markiezaatskade and Bathse Spuikanaal and Spuisluis.

The construction of the Delta Works has not only improved safety in the delta region, it has also opened up more opportunities for recreation. Although the Eastern Scheldt Barrier is the first water structure where nature conservation played a crucial role, when the Brouwers Dam was constructed, for instance, nature values were also taken into consideration – landscape architects were involved in the construction to make the entire area as attractive as possible for recreation. It is now a water sports hotspot, you can rent cottages or moor at the marina, and it hosts the Concert at Sea every year. The construction of the Veerse Gat Dam created the Veerse Meer lake. Nature reserves have been laid around the lake where you can walk (the Schotsman and Goudplaat) and on the lake itself, it is perfect for surfing, wakeboarding, paddle boarding, swimming, snorkelling and sailing. The Veerse Meer is dotted with islands that you can sail to and moor on.

If you would like to experience the Delta Works in all their splendour, there is a long-distance cycle route which will take you past all the works: Experience route: Expedition Delta.

The Delta Works were built to withstand what is known as a superstorm In theory, this only happens once every 4,000 years. But the climate is changing and the sea level is rising. Will the Delta Works provide enough protection in the long term? And what is needed to keep our feet dry in Zeeland? The Watersnoodmuseum looks ahead at the measures that may be needed in Zeeland and in the rest of the world.