The struggle with water has left its mark on Zeeland in all kinds of ways. In many places, you can still find creeks and deep pools of water that serve as reminders of the floods that once took place. Historically, creeks were often used for fishing. They were also a source of entertainment in the winter: people could skate on them. At the same time, the ice was put to practical use. Farmers could easily move their goods across the ice. Most of the creeks and pools of water are now part of beautiful nature reserves where nature has taken over. However, this charming appearance of today does not alter the fact that in the past, this is where water revealed its most destructive side.

What is now the Zak van Zuid-Beveland used to be made up of several islands and there was even an estuary to the north of the area. The local residents reclaimed the land bit by bit, but the water did not give in without a fight. Sometimes an area was too large to be reclaimed and a large creek remained in the area, like the Zwaakse Weel, for example. This is a nature reserve managed by Natuurmonumenten where you can go for walks. 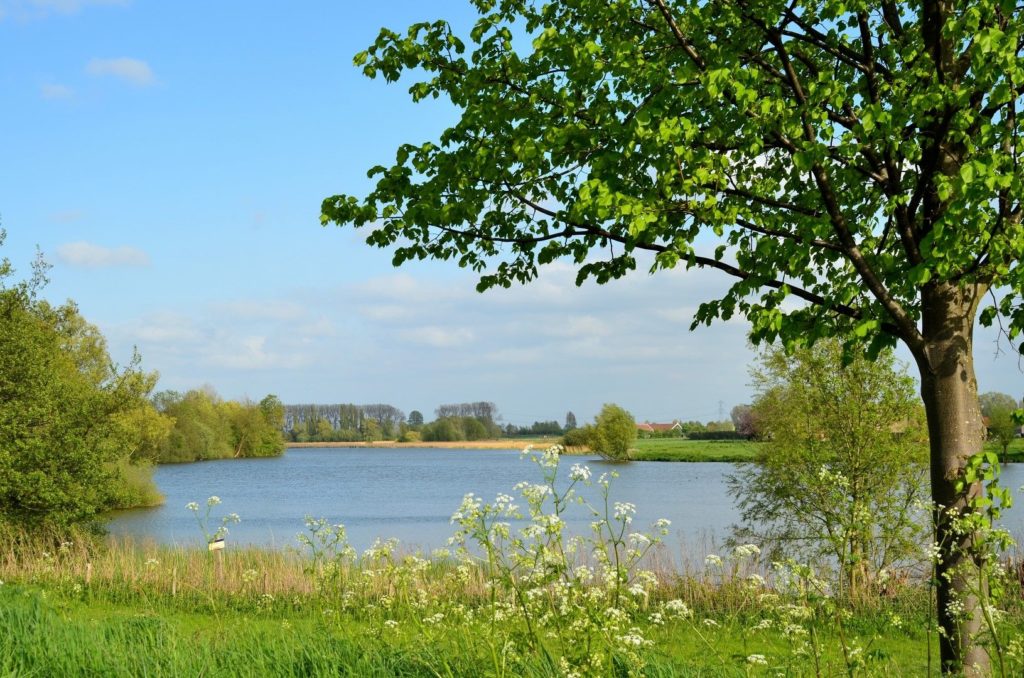 There were also numerous dike breaches – especially between the 12th and 16th centuries – which led to the creation of deep pools of water. These round pot-holes were so deep that the new dike had to be built around them or outside of them. You can still see them in many places in the Zak van Zuid-Beveland (although there are also a few in other places in Zeeland). The Valweel lies on the Valweel. This is a classic example of a so-called ‘weel’, a deep pool of water. You can tell by the sharp buckling in the dike exactly how it was formed around the deep scour hole. 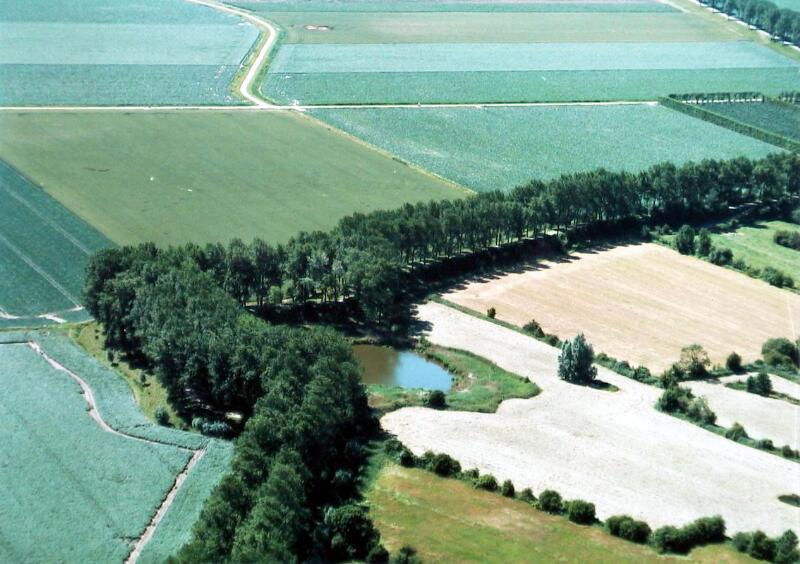 The Weel on the Valdijk near Nisse (photo SLZ).

Zeeuws-Vlaanderen has scores of creeks with a wide variety of origins. They were often originally tidal creeks that were still so wide and deep when they were reclaimed from the sea that a body of water remained despite being dammed up. But Zeeuws-Vlaamse creeks were also sometimes formed by dike breaches, storm surges or inundation, and there are also creeks that were largely dug by people, such as the creek area in the Sophia polder. At one time, there used to be a wide tidal channel system here that had many branches. When this silted up in the eighteenth century, large parts of the area were reclaimed. This is how the Sophia polder came into being. In the twentieth century, the decision was made to restore the polder to its former state: an elongated area with large ditches, islands, peninsulas, zones with shallow water and wet grasslands, in short, a historic creek landscape. Sand martins nest here now and there are many other special species of birds to be found. A lot of these birds brood on the large island which you can view from a viewing platform along the Isabella dike. 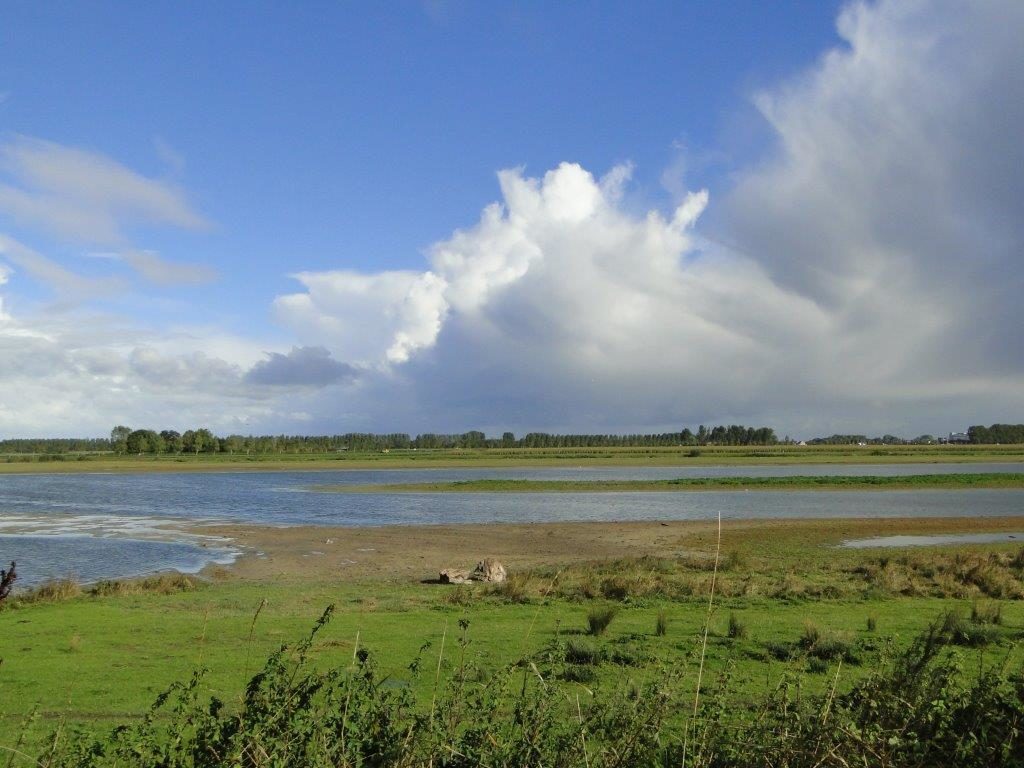 In October 1944, Allied bombing raids on the dikes submerged Walcheren. The Allies wanted to capture all the areas around the Western Scheldt so they could easily reach Antwerp. The inundation of Walcheren was intended to speed up the retreat of the Germans. Due to a lack of materials, it took a long time before the holes in the dikes were sealed – not until late 1945/early 1946. Because Walcheren was underwater for so long, the landscape changed dramatically. Roads were swept away or covered with silt and sand, and countless houses were destroyed. An extensive system of creeks also emerged. Forests were planted near these creeks and nowadays they are popular hiking and nature areas. An easily accessible footpath surrounds the largest of the Westkapelle creeks. There is a forest along the Veerse Kreek with walking and horseriding routes and exciting bridges and climbing structures that are fun for children, but secretly just as much fun for adults. There is also a forest you can walk in around the creek area of Ritthem. A literal high point here is a visit to the bird-watching hut. The entrance is on the dike side of the forest. The hut rises high above the water and affords a perfect view of the creek.

Creeks on the south coast of Schouwen-Duiveland

The 1953 flood disaster caused a lot of damage on Schouwen-Duiveland. A lot of dikes had to be repaired, particularly on the south coast. At Schelphoek on Schouwen, the breach in the dike was ultimately so large (525 meters wide and 37 meters deep at its deepest point) that a ring dike had to be constructed. The breach had also created an extensive creek area. A forest was planted around it. There are now hiking trails and a ‘find your way’ trail for children. You can fish here (with a permit) and there are sunbathing areas around the creek – so you can also swim here just fine.

The last dike hole was closed at Ouwerkerk in November 1953. You can learn all about it in the Watersnoodmuseum that is located here. As well as the museum, there is also a lovely area devoted to nature and recreation – here too, a creek area was created by the breach in the dike and a forest has been planted around it. Swimming is allowed in the creeks, you can fish with a permit and you can go canoeing. There are walking and bike routes throughout the area and for children, it is one big (wet and playful) voyage of discovery. All kinds of exciting nature attractions have been made especially for them: a tree house, play area, a wildlife observation area and much, much more.