“Access to the Schelde must remain blocked at all costs. Because there, the fall of Antwerp would spell the end of the German Reich.” Adolf Hitler understood the importance of the strategic location of Zeeland along the estuary of the Westerschelde and wanted to retain this area with all his might. Victory in the Westerschelde estuary was also crucial for the Allies to be able to secure supplies for the Allied troops in Antwerp. The sequence of events leading up to the liberation of the Western Front hinged on what happened on the Westerschelde. Consequently, one of the heaviest battles of the Second World War took place in Zeeland: the Battle of the Schelde. 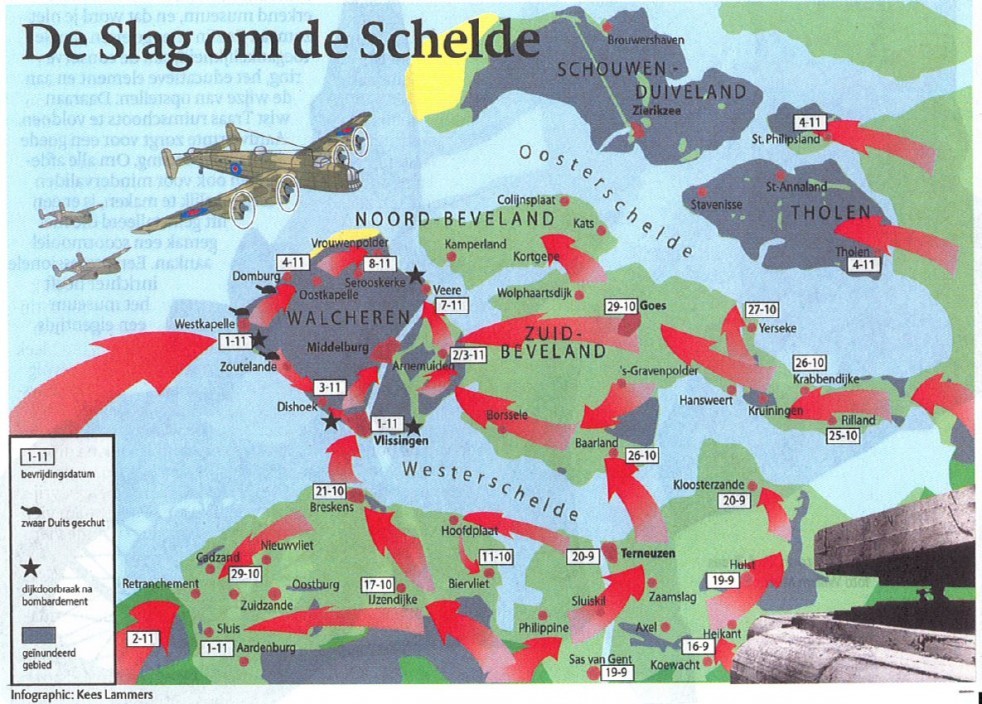 Map showing the liberation of Zeeland during the Battle of the Schelde (www.stichtingslagomdeschelde.nl, Kees Lammers).

The Battle of the Schelde in numbers

The Battle of the Schelde began on 4 September 1944 with the fall of Antwerp and ended on 6 November 1944 with the capitulation of the German commander Wilhelm Daser in Middelburg. The battle cost the lives of 2,283 civilians and 7,481 soldiers. The sequence of events in the Battle of the Schelde comprised four stages:
– Advance on Zeeuws-Vlaanderen
– Operation Switchback in West-Zeeuws-Vlaanderen
– Operation Vitality Zuid-Beveland
– Inundations and liberation: operation Infatuate Walcheren

Antwerp fell into allied hands on 4 September 1944. The 15th German Army was thus hemmed in and a rapid advance of the allied forces was expected. Panic rose among the occupiers and the German High Command gave the order to escape the allied siege via the Zeeland islands. On Dolle Dinsdag (Mad Tuesday), 5 September 1944, German troops retreated en masse from northern France, Belgium and Zeeuws-Vlaanderen, and in doing so, used anything they could get their hands on that could be driven. They even requisitioned prams. Nevertheless, after a few hours the occupying forces regained control of the situation and German soldiers were returned to their posts or quartered elsewhere, while waiting for their passage to Walcheren and De Bevelanden. 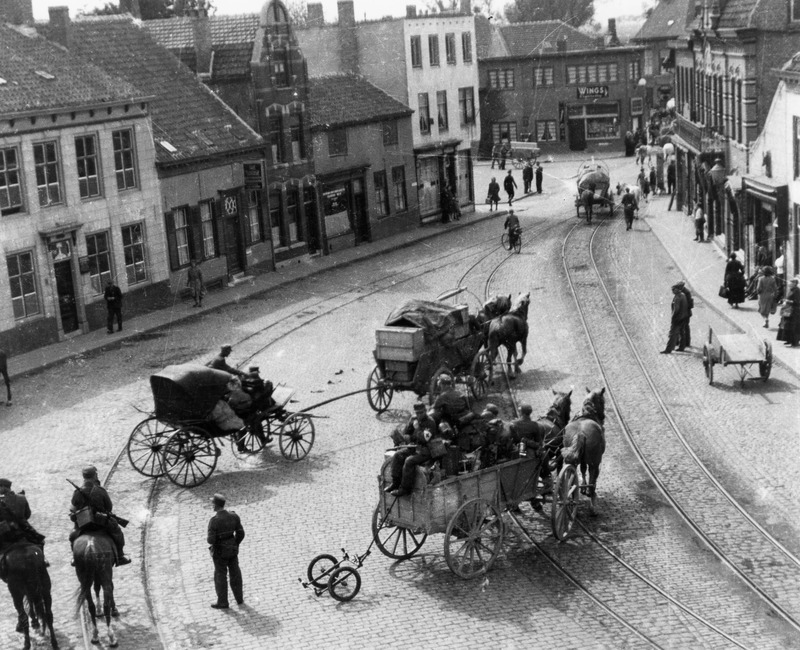 In spite of this, the retreat of the 15th German Army continued unabated. The men were in fact deployed to reinforce the troops in North Brabant and to defend the estuary of the Westerschelde. The Allies tried to prevent the retreat of the German soldiers by bombing the ferry ports in Zeeuws-Vlaanderen, Walcheren and Zuid-Beveland, with the Zeeuws-Vlaanderen village of Breskens being hit the hardest on 11 September 1944. The bombing of Breskens missed its target: the ferry port was still intact and a few hours later the crossing of German soldiers on the Westerschelde resumed. Eventually, more than 80,000 men of the German 15th Army were able to make their getaway via Walcheren and Zuid-Beveland to Brabant.

On 16 September, the first allied troops crossed the border from Belgium into East-Zeeuws-Vlaanderen. It soon became apparent that German resistance in this area was breached. East-Zeeuws-Vlaanderen was liberated over the course of five days. After the rapid advance in East-Zeeuws-Vlaanderen, the Allies moved westwards, where they encountered fierce resistance from the Germans during Operation Switchback. West-Zeeuws-Vlaanderen was liberated village by village, starting with Eede on 6 October and ending with Sluis on 1 November. The liberation of Breskens was of strategic importance for the Allies, the harbour itself had to be prepared for the landing in Vlissingen. On 21 October, Breskens was liberated and on 25 October a group of allied naval forces arrived in the harbour. This ensured that by the end of October, Walcheren was surrounded on all sides. 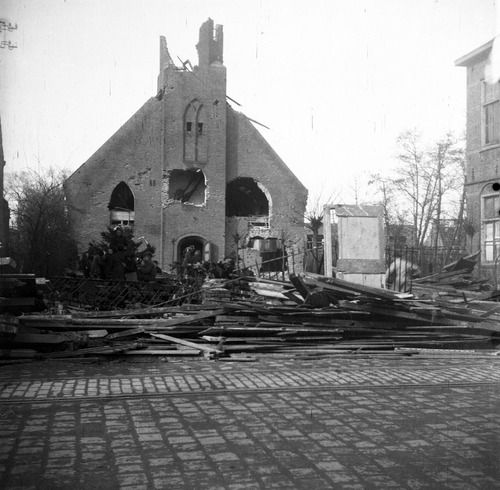 At the same time, heavy fighting was also going on in other parts of Zeeland. Between 24 and 30 October, the allied forces launched Operation Vitality aimed at liberating Zuid-Beveland. Starting on 2 October, the area between Antwerp and Woensdrecht was the scene of bitter battles to secure the eastern access to the Westerschelde shores. The Canadian army suffered particularly heavy losses during the battle for Woensdrecht on 13 October, also known as Black Friday. Operation Vitality was carried out in two stages: the Canadian armies advanced from Brabant over the Kreekrak Dam and the British landed amphibious assault vehicles along the Westerschelde at Baarland and Hoedekenskerke. The strong German resistance on Zuid-Beveland crumbled due to this joint attack. The area was liberated on 30 October, whereupon the Allies were able to advance to the Sloe Dam, which connected Walcheren to Zuid-Beveland. From Brabant they fought for the island of Tholen and Sint Philipsland at the same time, which were liberated on 30 October and 4 November respectively.

Walcheren was surrounded on all sides and attacked from the west, the south and the east. However, the battle for Walcheren was not won without a struggle; the Germans put up fierce resistance. From the east, British and Canadian armies attacked the Sloe Dam. The Battle of the Sloe Dam began on 31 October and it took five days before there was a bridgehead for the Allies. Walcheren was attacked from the south across the Westerschelde, in Vlissingen. Allied troops landed here on 1 November. The battle in the town centre lasted three days and Vlissingen was liberated on 3 November. The destruction was enormous, only one house remained unscathed. 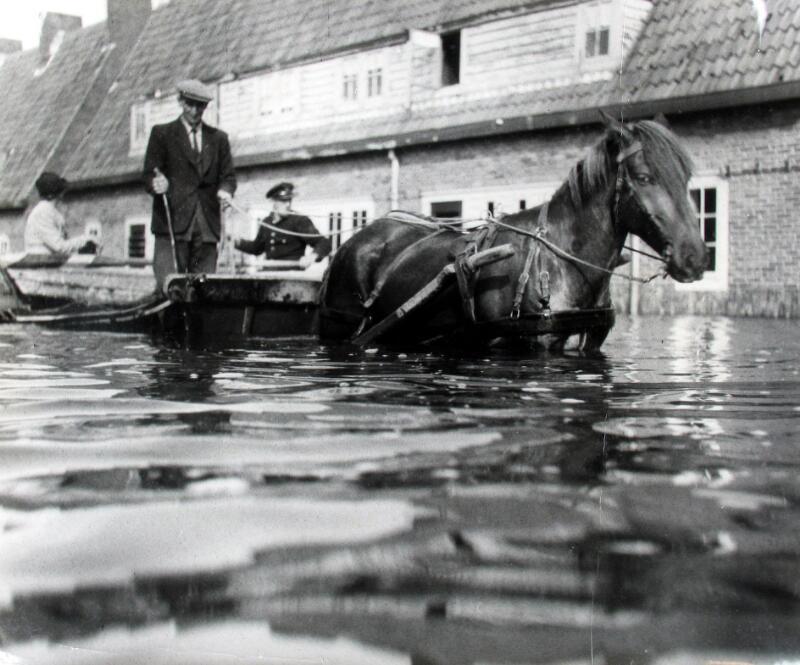 Air and sea attacks were launched west of the island near Westkapelle. In preparation for the invasion of Walcheren, the Allies carried out heavy bombardments of the dike at Westkapelle, resulting in the deaths of 180 civilians. Eventually the dike broke and Walcheren was flooded. The Allies made use of this to try to break down the defences of the German troops. On 1 November, thirty Allied ships landed at Westkapelle. The advance of the Allied troops from three directions could then quickly be continued and on 6 November, the German commander Wilhelm Daser capitulated in Middelburg. This marked the end of the Battle of the Schelde and brought liberation to a large part of Zeeland.

However, Schouwen-Duiveland would not be liberated until May 1945. During the last year of the war, the island suffered heavily from inundations, precision bombing and the evacuation of almost its entire population.