During the Second World War, the Germans built a defensive line of over 5,000 kilometres from Norway to Spain to prevent an invasion by the Allies: the Atlantic Wall. The line was made up of bunkers, cannons, barricades and minefields, among other things.

The Atlantic Wall was not a single continuous wall. The defences were concentrated at strategic points such as river mouths – at Vlissingen in Zeeland. Along the coast in between, defence posts were built at considerable distances from each other. On survey maps, you can see the way the bunkers were spread across Zeeland. In fact, the Atlantic Wall was a chain of coastal batteries, barricades and auxiliary bunkers. Besides artillery against invading ships, anti-aircraft guns and anti-tank guns were also stationed there. This anti-tank artillery was often used to build tank obstacles (such as tank ditches, so-called dragon’s teeth – pyramid-shaped concrete blocks, tank walls and tank traps). The Atlantic Wall was never completely finished. After the invasion in Normandy, construction largely came to a halt. However, the defences still played a role in the German defence of the Westerschelde and the battle for Walcheren in the autumn of 1944. 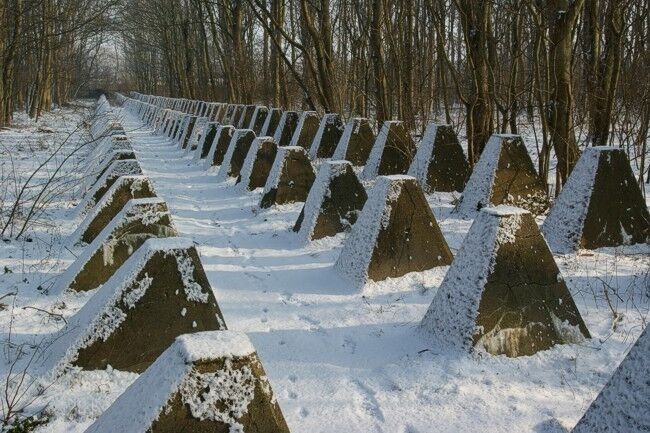 Barricade with dragon’s teeth in Groot-Valkenisse.

For the construction of the Atlantic Wall the Germans initially used their own soldiers. But that did not provide enough manpower and so construction companies from the surrounding area were forced to help build it. They provided their services in return for payment. Later, the local population was forced to help and prisoners of war were also brought in. The bunkers have extremely thick walls of reinforced concrete. At the beginning of the war, they were 2.5 metres thick. When the weaponry became more powerful over the course of the war, they even reached a thickness of 3.5 metres. To keep the Allies guessing, the Germans camouflaged their bunkers. Some bunkers looked like a house or a barn from a distance. In the dunes, they covered the artillery bunkers with bushes and camouflage netting so that the cannons could not be seen from the air. 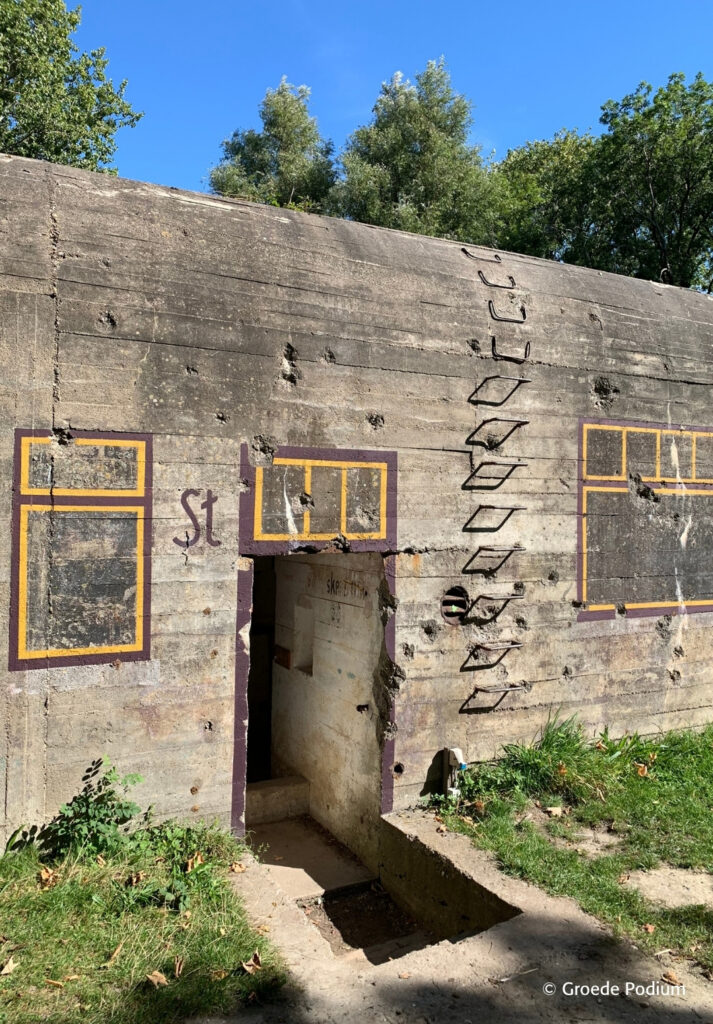 Types of bunkers and other defensive structures

German architects and engineers had drawn up standard plans for the construction of different types of bunkers. There were observation bunkers, command bunkers, fire-control system bunkers, artillery bunkers, munitions bunkers, telephone bunkers, sleeping and accommodation bunkers, toilet bunkers, one-man bunkers. Several bunkers were grouped together in a battery. There was usually also anti-aircraft artillery and a radar system. From a fire-control system bunker, the soldiers determined where they should aim to shoot. The bunkers were surrounded by living quarters, kitchens, bathhouses, toilets and a place to store ammunition. The bunkers were connected by open trenches or covered passageways.

Further inland, there were land fronts: kilometres of bunkers and other obstacles such as tank walls, tank ditches, minefields and dragon’s teeth (concrete pyramids).

On account of its control over the Westerschelde, Vlissingen was an important position during the Second World War. Vlissingen had not only a Sea Front, but also a Land Front to defend against attacks from the rear. The Land Front started at the dunes near Valkenisse and ran via Koudekerke to the Kanaal door Walcheren and then in the direction of Ritthem. It ended here at Fort Rammekens. Many parts of this land front have been preserved and in 2013 the Land Front was designated a national monument. 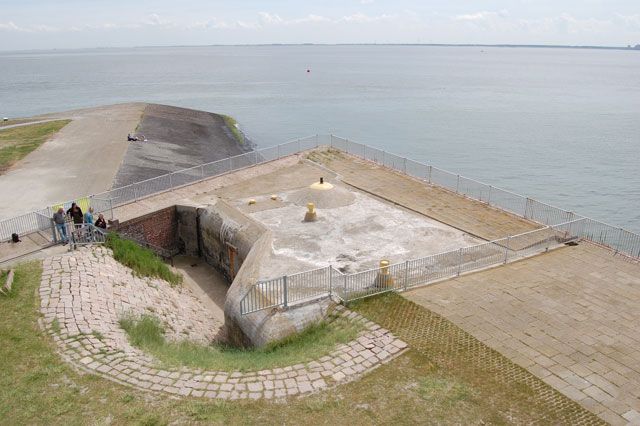 The artillery observation bunker near the Oranjemolen in Vlissingen.

Toorenvliedt Park and the communication bunker

Around the summer of 1942, the Germans set up their headquarters of the Walcherse and Beveland Atlantic Wall at Toorenvliedt near Middelburg. Because the park offered shelter and there was extra accommodation in the neighbourhood (large villas and rural properties), it was an exceptionally convenient place. The Germans built seven bomb-proof bunkers (including one communications bunker) there in mid-1944 in response to the growing threat of an Allied invasion. In Park Toorenvliedt, a walking route/experience trail now runs past the bunkers. The communication bunker has been set up as a museum and is open to the public. If you want to know more about the redevelopment of this area, you can also watch a short video clip from the Zeeland canon.

The Germans wanted to use coastal batteries in the dunes to defend Walcheren. There was a field artillery to stop enemy troops on the beach. This artillery was located further inland (in Westkapelle, Zoutelande, Koudekerke, Buttinge and Vlissingen, among others). That is why observation bunkers were built in the dunes and on the dikes, which could inform the field artillery about what was happening on the beaches. That is also why bunkers were built in the dunes near Zoutelande: a personnel bunker and an observation bunker. This gave the Germans a perfect view over the Schelde estuary, the beaches and the entire island of Walcheren. These bunkers are open to the public. The Bunkerbehoud Foundation has converted them into the Bunkermuseum Zoutelande. 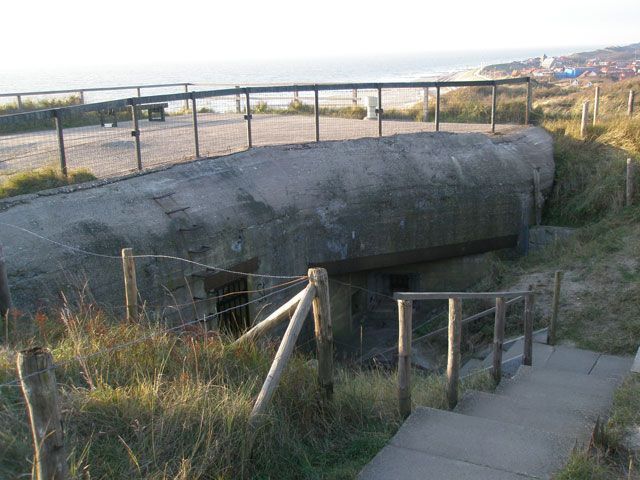 Observation bunker on the 45-metre high top of the dunes south of Zoutelande.

As it became clear at one point that the Allies would be landing, General Rommel wanted to limit the number of potential landing sites. The decision was made to partly flood Schouwen-Duiveland and install bunkers. The Vleugelbunker in the woods near Burgh-Haamstede is without a doubt the most well-known of these. From the bunker, you have a magnificent view of the Zeepeduinen nature reserve. This bunker (like the other bunkers in this nature reserve) now provides shelter to bats.

After the Second World War, there was a housing shortage. Some of the bunkers were temporarily used as homes. Museum Het Polderhuis in Westkapelle has photos showing this. Later, many of the bunkers and other defensive structures were demolished. A dangerous job, as this could only be done using explosives. It took a while before the people recognised the value of bunkers as cultural heritage and set to work on preserving them. You can still find traces of the Atlantic Wall in all sorts of places. In the woods near Valkenisse, for example, you can even see dragon’s teeth and other bunkers, and there are also tank ditches in the area. Several bunkers (near Zoutelande, Vlissingen, Dishoek and Middelburg) house museums. A playground has been set up around them at Groede Podium. Other bunkers, which are not open to the public, provide sleeping places for bats. On the terrain of the Bevrijdingsmuseum in Nieuwdorp, there are one-man bunkers that originally stood in Goes and Vlissingen. These are also open to visitors.