Zeelanders can be very tenacious in their battle against the water. If a single dike isn’t offering enough assurance? Then they will quickly build a reserve dike. Many of these ‘inlaagdijken’ (reinforced reserve dikes) have been built, especially around the Eastern Scheldt (on the south coast of Schouwen-Duiveland and the north coast of Noord-Beveland),

These reserve dikes served as an extra safeguard against water and were built behind an existing dike if, for example, a dike breach (a sudden collapse of part of a dike) was feared. The area of land between the outer dike and the inner dike is called an ‘inlaag’. Often, the soil for raising the dikes was also sourced from this area. The clay for the dikes was dug out in strips, which created elongated pools and ditches with small dams in between. Because the excavated clay was removed with carts, these areas are called ‘karrenvelden’ (as in cart fields). 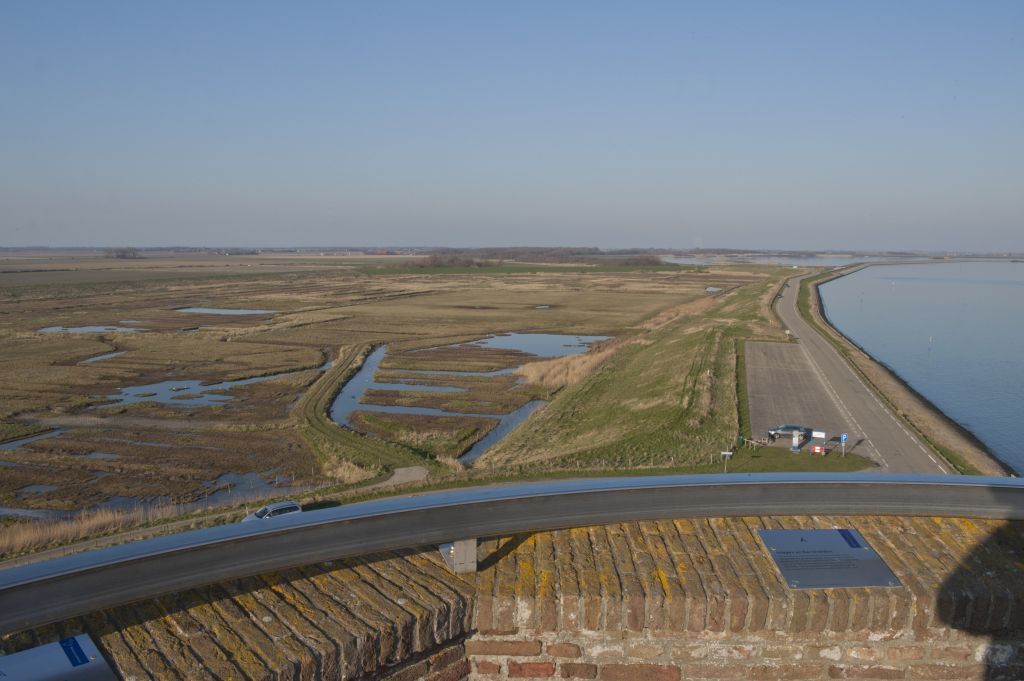 The tracts of land between dikes and reinforced reserve dikes (inlagen) and cart fields characterise the landscape on the south coast of Schouw (photo Eddy Westveer, beeldbank.zeeland.nl).

As a direct consequence of violent storm surges in 1530 and 1532, Noord-Beveland was almost wiped off the map. It is therefore only logical that when the island was finally reclaimed, people took the struggle against the water extremely seriously. And what a struggle it was. On the north coast, dike breaches were almost the order of the day. Between 1800 and 1960, over 240 of them were recorded. The constant struggle, the loss and accretion of new land, as well as the construction of new areas between dikes and reinforced dikes, ultimately resulted in a rather erratic coastline. A cycle path now runs outside the dikes and just by looking at how angular and winding this route is, you can see how special this stretch of coast is.

There are several reinforced reserve dikes here, or ‘kupen’ as they are also known on Noord-Beveland. Many of these are owned by Het Zeeuwse Landschap (the organisation for the preservation of the Zeeland landscape), which is responsible for managing them. This is a perfect area for bird watching. There are plenty of meadow birds and also a lot of waders that come to roost in the more water-rich areas between dikes and reinforced dikes. If you would like to explore Noord-Beveland’s ‘inlagen’ – the wet areas between the dikes and the reserve dikes – there is a great cycle route that takes you past almost all these areas and also covers a large part of the cycle route along the outer dike. Tip: the Keihoogte bird-watching station makes a great stop-off point along the way.

Inlaag de Keihoogte are two of these kinds of areas in between dikes on the north coast of Noord-Beveland. It lies in an area that is steeped in history (nearby was once the village of Vliete which was drowned during the floods of 1530 and 1532) but the reserve dike area itself is relatively recent. Just like the slightly more easterly located Inlaag s-Gravenhoek, it was only formed when the Oosterschelde dike was raised to the height of the Delta in 1980. Which is why you will not see any cart fields in these young inlagen. However, there are some low-lying dunes in Inlaag Keihoogte, just as there used to be when the tide still had free rein here.

Many of Schouwen-Duiveland’s inlagen have lost the battle against the water. On the south side of the island, for example, a huge area of ground has been lost. But at the height of the Plompe Tower of Koudekerke, you can still find a sizeable tract of inlagen and cart fields. On top of the tower is a lookout point that offers a splendid view of this natural and cultural landscape: the Koudekerkse inlaag. The water within the inner dikes is also salty here: glasswort even grows in the cart fields. This is particularly noticeable in the autumn. Just like the leaves on the trees, glasswort turns red and looks pretty spectacular, especially under a fierce autumn sun.