Zeeland is a province with few forests, with the odd poplar forest on clay ground or pine forest on sandy soil. The trees are neatly lined up, all the same species and age. A bit boring. That is the general image. Yet there are definitely natural and characteristic forests in Zeeland. We’ll take a fictitious exploratory route from the coast to the east of the province. We will disregard any man-made influences. 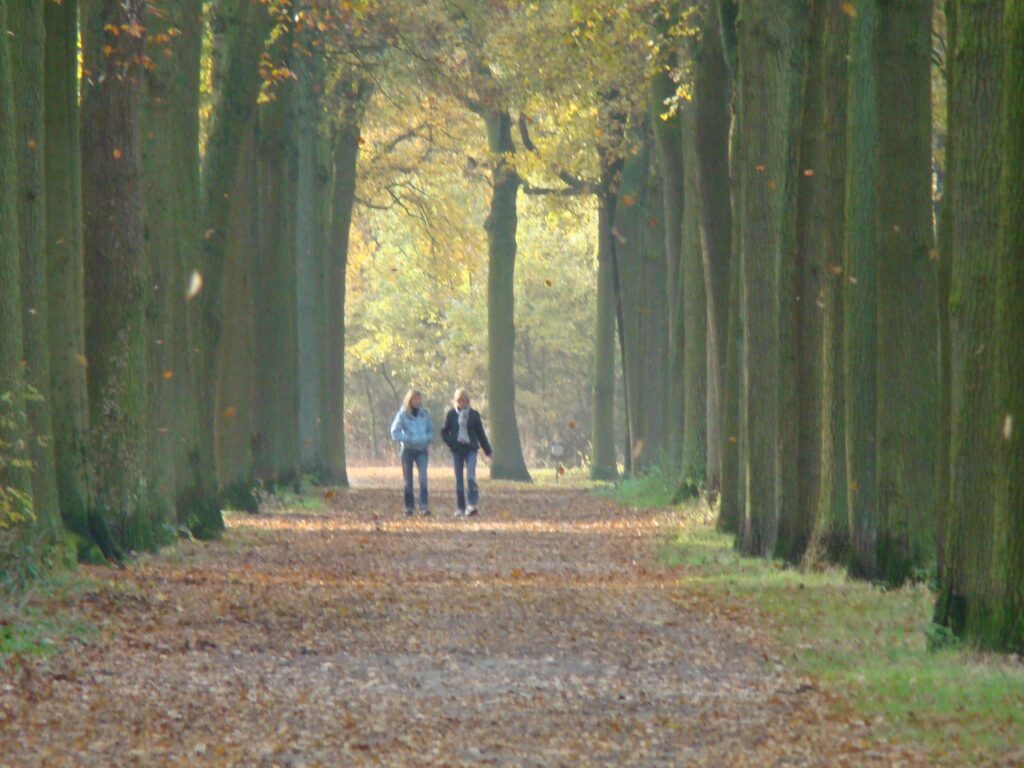 Under the influence of the wind

Our journey starts on the beach. When we walk up the dunes, the wind is blowing hard. So hard that no trees are able to grow here. In fact, we are dealing with a tree boundary, just like there is in the mountains. The first woody species we see is the sea buckthorn, a sturdy windbreaker. After crossing the highest dune tops, we can see the first trees, although they look more like shrubs in terms of their size. They are strangely shaped oak trees, shorn by the wind. Particularly noticeable are the lichens that benefit from the salty sea spray. 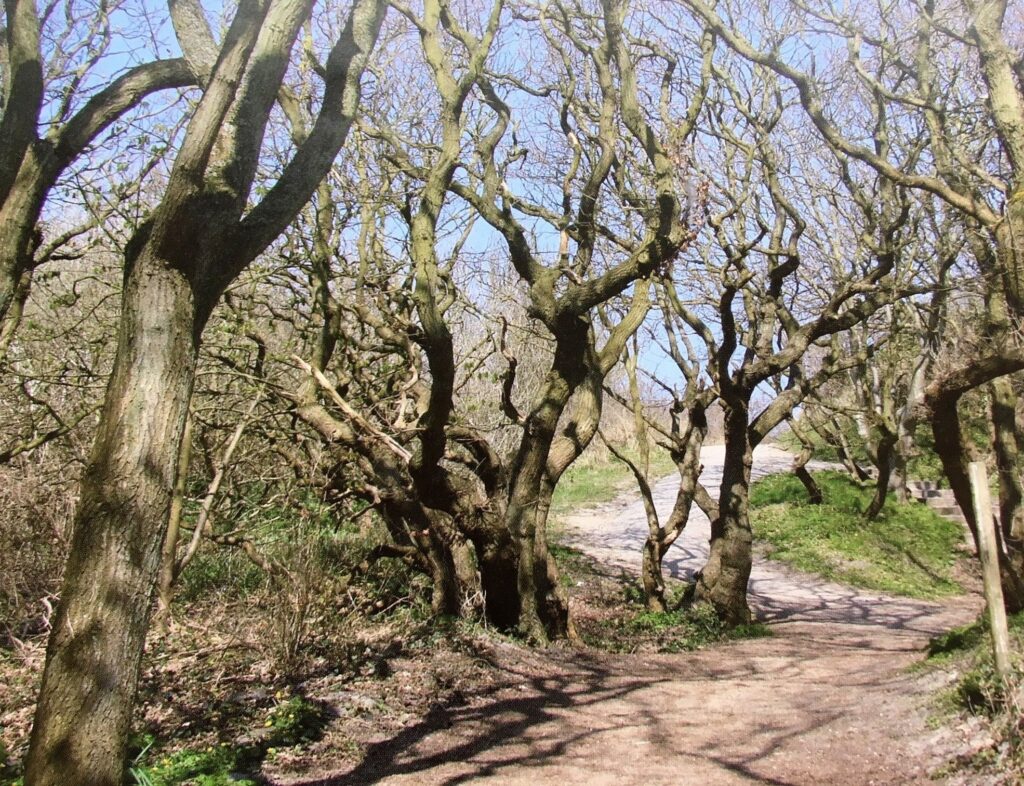 A little further inland, the dune scrub dominates with species such as sea buckthorn, wild privet, elder, hawthorn and a variety of roses. The soil is dry and calcareous. 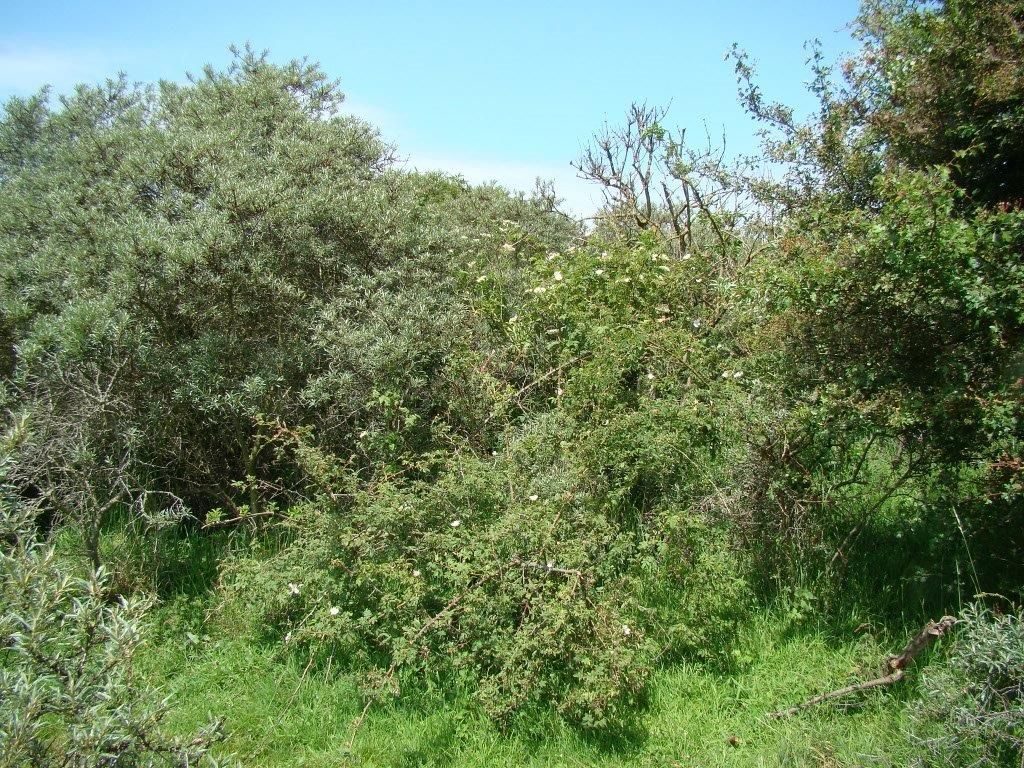 To the east, the trees get taller. The tree crowns are thin enough for an abundant flora with species such as three-leaf wall, climbing primrose, yellow nailweed and the rare snake’s garlic. This is the so-called ‘abelen-iepenbos’, a forest full of silver poplar and common oak trees. 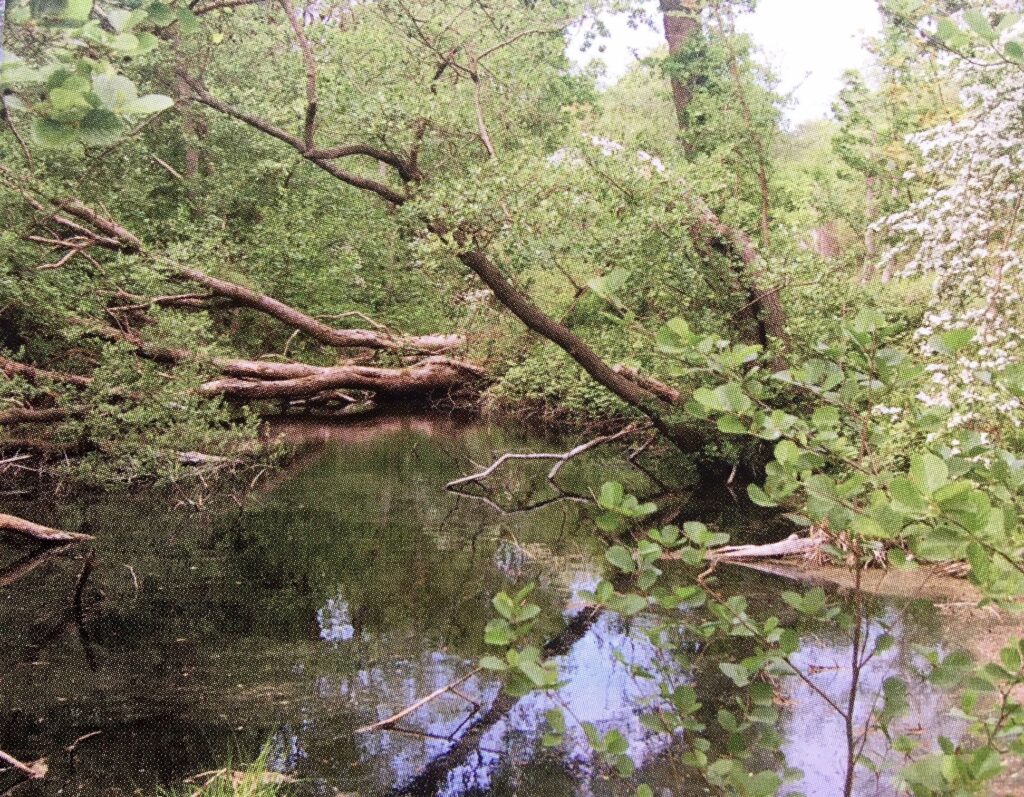 Impressive trees on the sea clay

Further inland, the soil becomes more level, nutrient-rich and more moist. We have arrived in the sea clay area. And what an impressive forest, with trees up to almost 35 metres in height. We see thick ash, elm and oak trees and a wide variety of shrubs. This is an ash-elm forest. The biomass is substantial, but biodiversity has also reached its peak. Not in terms of flowers or butterflies though. It is too dark here for those species. The richness lies in the inhabitants of the soil and humus, such as hundreds of sorts of mushrooms. But also all invertebrates in the tree trunks, such as beetle larvae, woodlouse and centipedes, and dozens of sorts of moss.

In the edges of the forest and around the clearings, there are richly flowering shrubs: blackthorn (also known as sloe), hawthorn and many roses and blackberries.

Trees that can withstand wet feet…

And on we head eastwards. All of a sudden, the ground becomes more soggy, apparently we are approaching a creek bank with a marshy area. Between the black alders, we see almost man-sized clumps of greater tussock-sedge pollen and a splendid display of flowering yellow irises. We also see black currants, gypsywort and common loosestrife. We have now entered the fairytale-like alder woods with its high level of humidity and slightly misty atmosphere. 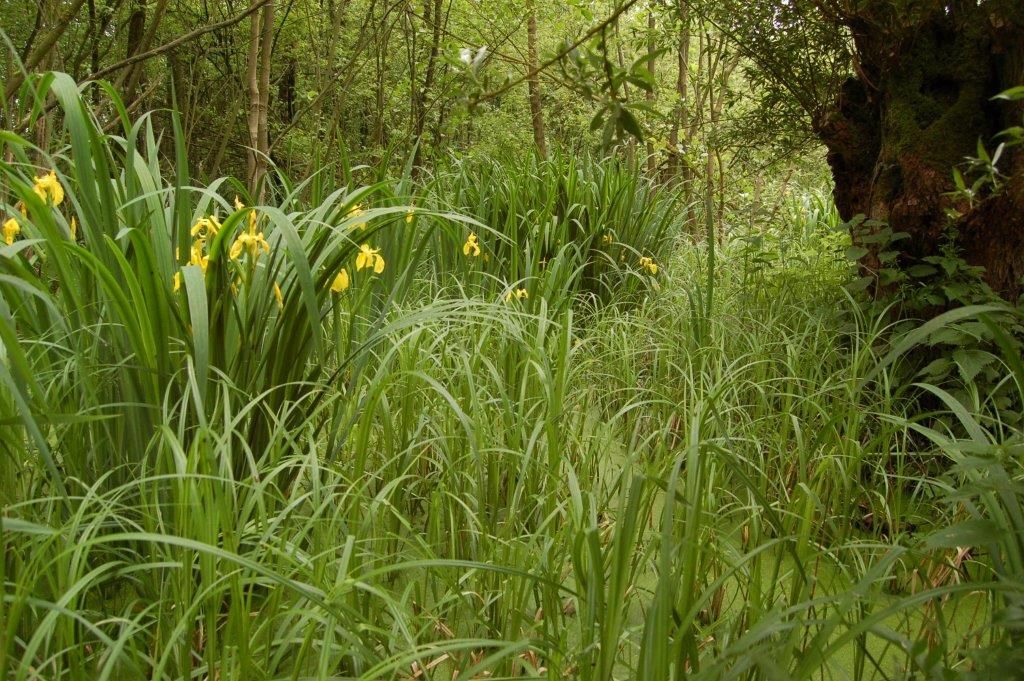 … wider than they are high…

Closer to the creek, the trees are becoming noticeably lower. Water levels are above the ground here right into the summer. This high water means that only willows can survive, in particular the grey willow and the pussy willow. In between, we see winding vines of the bittercress. Welcome to the association of the grey willow. It is very noticeable that many willows are much wider than they are tall. The trees have lateral branches that reach down to the ground. They take root there again and grow further sideways. This creates a labyrinth of tree trunks that lie on the ground and on top of each other, which you can clamber over to get above the water.

… or just be able to get to drier ground

Time to get our feet dry again. We turn off in a southerly direction and arrive at the foot of the surface sand area on the border with Flanders. As we walk up the sand ridges, the ground becomes gradually drier. Trees that need fertile and moist soil, such as ash, immediately vanish from our view. Rowanberry and bracken are common. The diversity of species increases again, but differs strongly from that of the clay area. That is why this area is also called the Flemish district. We are in the beech-oak forest. The soil is fairly fertile, which can be seen from the vigorous growth of the trees. 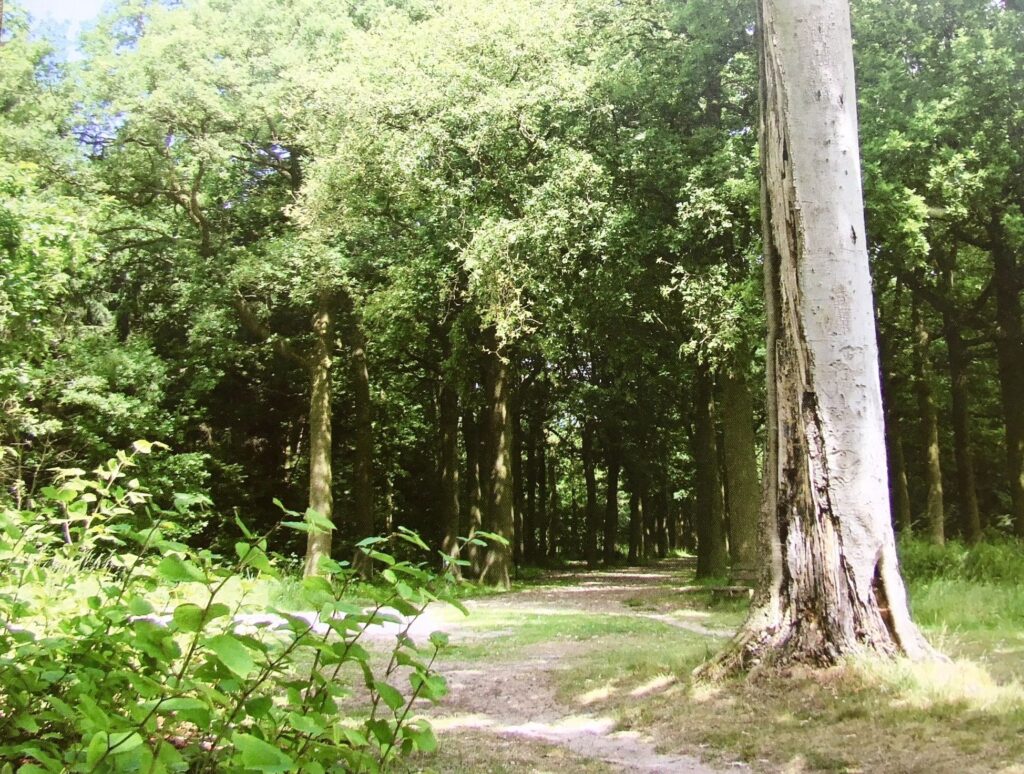 Further up, the soil becomes more nutritious and drier and the trees smaller. Unlike the dune sand, the soil is poor in calcium and the number of plant species is fewer. Birch replaces beech. That is why this forest is called the birch-oak forest. Higher up, more and more trees and shrubs disappear. Gone are the blackthorns and sweet cherries. They can no longer survive on this bone-dry, nutrient-poor sand. Red elderberry and alder buckthorn are taking their place instead. We find wavy hair-grass and heath plait-moss amongst the vegetation. On the higher dry ground, we also see pine forests with a lush undergrowth of ferns and pluerocarp mosses, the pincushion moss-pine forest.

The landscape suddenly opens up on a level section. The soil has apparently become compacted, as there is still some water on the surface. We see thin birches and heather-like vegetation with species such as bell-heather and gale. We are in the marshy birch woods. This is also a marshy woodlands, but very different from the alder birch woodlands where we were before. Its biomass, in particular, is a lot lower. At the edge of the pond, a fringe of willows reminds us of the association of grey willow from the clay area. But even now, the forest is much more sparse than the willow marsh below. Here, we are in the so-called association of eared willow.

In Zeeland, the natural development of forests has never had much chance. Almost all the fertile clay was used as farmland, so that clay forests are very rare. The forest that does exist is chiefly production forest that is harvested periodically. And then there are the exotics: the American wild black cherry is crowding out many other species. In a lot of forests, there is hardly a native tree left. Ammonia in the air has changed the flowery forest vegetation into one made up of blackberries and nettles. Surface sand areas have been drained, causing the typical marsh woodlands, including heath, gale and peat moss, to disappear The above-mentioned woodlands, our natural forms of forest, exist in Zeeland only marginally or in their purest form, or even only in theory.

Luckily, there have also been some positive developments. In previous centuries, wealthy people built country estates with forests along the inner dune edges and on sandy creek ridges. These were usually silver poplar-oak forests. They have abundant flora in the spring, because many so-called ‘stinzenplanten’ (decorative plants, often exotic, early-flowering species with striking flowers) were introduced here. And during later land consolidation and nature development, some forests were also planted, even on clay soil. 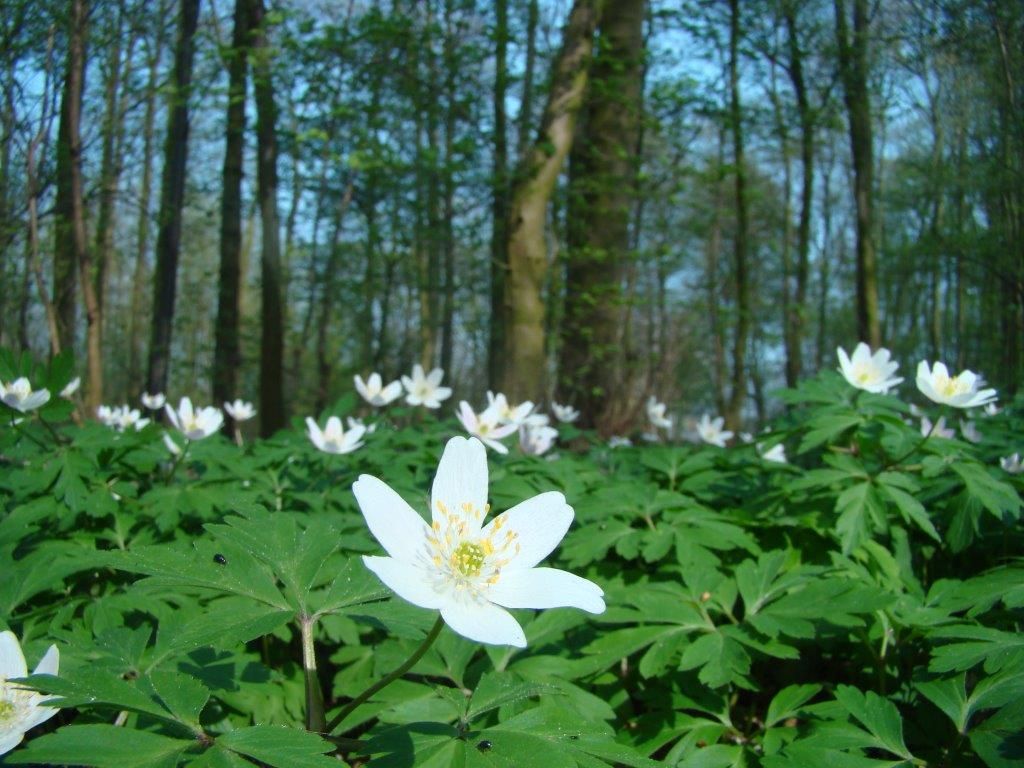 Nowadays, more emphasis is being placed on nature-friendly forestry management, whereby more trees are allowed to grow old and remain after they have died. In the forests that it manages, Het Zeeuwse Landschap (the organisation for the preservation of the Zeeland landscape), practises a form of management that focuses on this type of natural development. Some of these forests are very rare even in an international context: the Slikken van de Heen with its riverside hardwood riparian woodlands and Oranjezon with dune scrub.