With its 54 pillars sticking out in a long row above the Oosterschelde estuary, the Zeeland bridge is incredibly photogenic. But no matter how hypnotising all those concrete components may be to look at, the bridge has not been built just for the sake of aesthetics. Its construction was born out of necessity because the various regions of Zeeland needed to be connected properly with each other and held together. 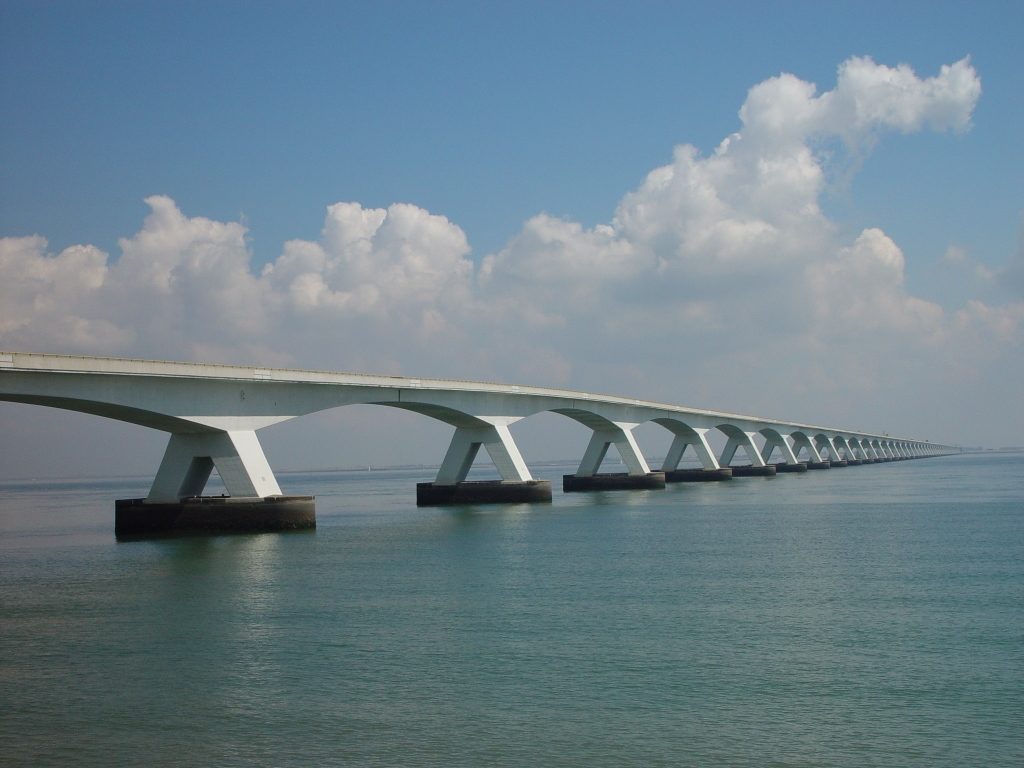 In Zeeland, the construction of the Delta Works had been in full swing since the 1950s. These not only provided extra protection, but also ensured that the Zeeland islands were connected to each other and to the mainland. And yet the decision was made to build a bridge as well. There are several reasons for this.

The Province wanted to have a central traffic connection with the Randstad. Initially, this was incorporated into the Delta Plan. The dam would end at Wissenkerke and be completed in 1978. Because the dams between Goeree-Overflakkee and Schouwen-Duiveland were supposed to be completed more than ten years earlier, the provincial government feared that the population of Schouwen-Duiveland would focus all their attention on South Holland in the interim. So a connection with the rest of Zeeland was needed (literally) and that could not wait for the dam at the mouth of the Oosterschelde estuary. This is why the provincial government made funds available for a ‘central road’ between Central Zeeland and Rotterdam. The bridge would also connect the Randstad region with the Belgian and northern French industrial areas. The new industrial areas near Vlissingen (the Sloe) and Terneuzen would also stand to benefit from this.

Schouwen-Duiveland and Noord-Beveland were the last islands in Zeeland to receive a permanent connection to the shore. In 1962, the Provincial States approved the construction of a bridge across the Oosterschelde estuary. The NV Provinciale Zeeuwse Brug Maatschappij was set up. It was to operate the bridge. The Province was a major shareholder. The loan that was needed for the construction of the bridge would be repaid from the proceeds of the toll.

The Oosterschelde Bridge had to be completed within three years, at the same time as the Greveling Dam. Because there was not enough skilled labour available and the time available for construction was short, a concrete construction was chosen. The actual bridge is a tube of pre-stressed concrete, which at its highest point is 17 metres above sea level. The Zeeland Bridge comprises 52 spans and 54 pillars. Each pillar then rests on three hollow concrete posts, each 25 to 50 metres long. The concrete sections of the bridge were made on a site near the ferry port of Kats. 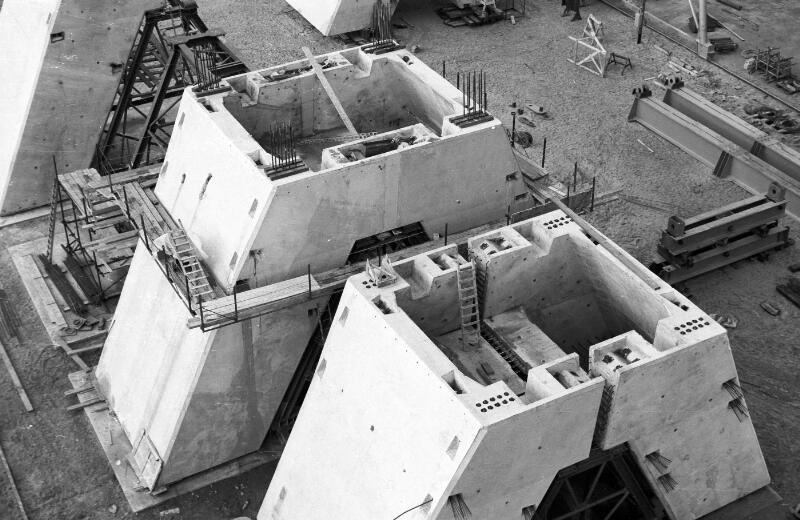 In total, approximately six hundred people worked on the bridge. Many were former farm labourers, who became iron workers or concrete workers. 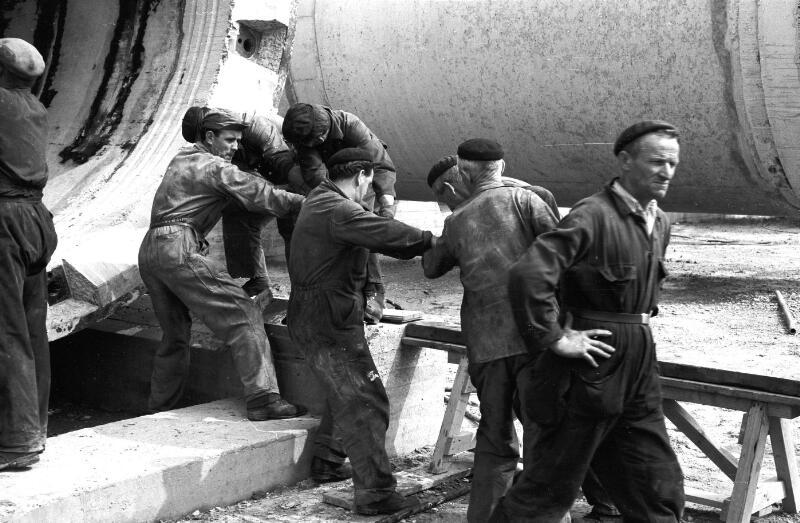 Workmen at the construction of the bridge in 1964 (ZB, Image Bank Zeeland, photo C. Kotvis).

When the Oosterschelde Bridge (as it was initially called) was completed in 1965, it was the longest in Europe, measuring over 5022 metres. On 15 December 1965, Queen Juliana paid a rijksdaalder (a Dutch ‘national dollar’ worth roughly one euro) at the toll booth and then, just before half past three, pressed a button and then the bridge that would let ships pass through, came down. The bridge was officially opened. At that festive moment, the horns of the waiting ships sounded from the water. 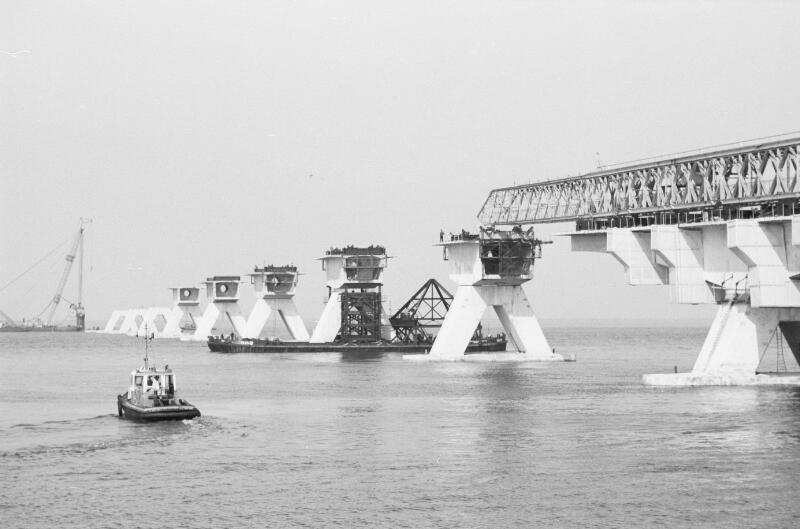 The bridge, which was officially named the Zeelandbrug two years after its opening, is 5022 metres long. It has 52 spans and 54 pillars. The actual bridge is a tube of pre-stressed concrete, which at its highest point is 17 metres above sea level. Each pillar rests on three hollow concrete posts, which are 25 to 50 metres long. The concrete sections of the bridge were made on a site near the ferry port of Kats. 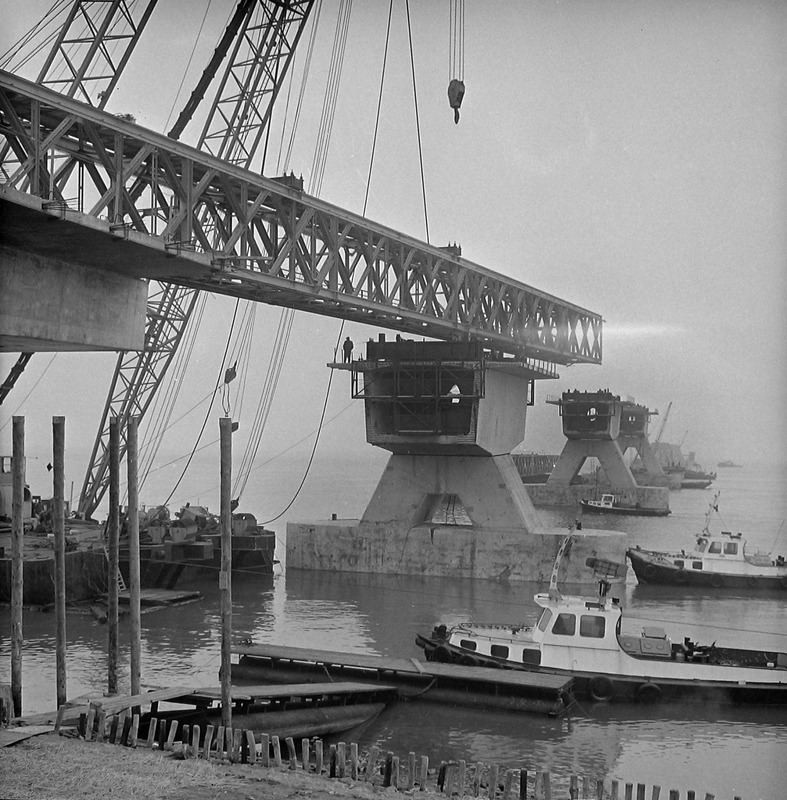 Because of its modern construction and building method, the bridge attracted the interest of many bridge builders from home and abroad. The Zeelandbrug was the longest bridge in Europe up until 1972.

The construction of the bridge cost the province 77 million guilders. That money had to be earned back by levying a toll. In 1978, the bridge was supposed to become toll-free. But when the completion of the Delta Dam (later known as the Oosterscheldekering) was delayed, the toll period was extended. Revenues from the toll also turned out to be lower than expected. The toll tickets became more expensive and the bridge company had to borrow money from the province. Even when the road over the storm surge barrier was opened in 1987, the provincial government kept the toll for the Zeelandbrug with the aim of building up a maintenance fund. Meanwhile, the number of cars passing the bridge per day had fallen from 7700 in 1970 to just under 6000 in 1987. 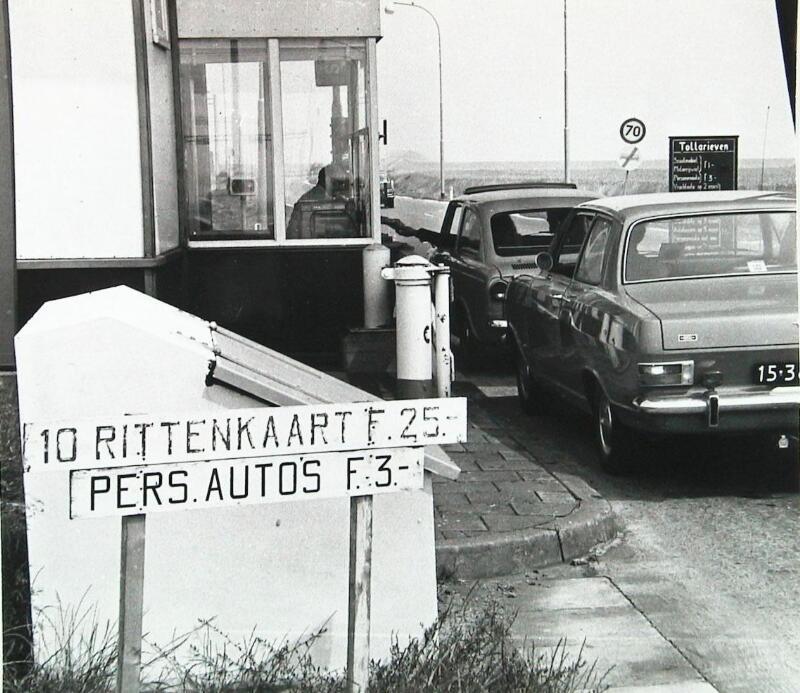 The residents of Schouwen-Duiveland thought the toll was bad for the economic development of their island. The municipal authorities launched protest campaigns when the provincial government announced in 1989 that it would not be abolishing the toll until the year 2000. These protests were successful. In 1990, the Provincial States forced the provincial government to abolish the toll in 1993. The number of passing cars rose again after that.

End of the ferry service

The bridge replaced the ferry service between Zierikzee and Kats. The Province of Zeeland had taken over the operation of the ferry service across the Oosterschelde estuary in 1912. Up until 1923, a ferry sailed from Zierikzee via Katse Veer, Kortgene and Wolphaartsdijk to Middelburg and back. From 1923 onwards, it sailed as far as Kortgene, and in 1941, the final destination was Katse Veer. The travel time was over an hour, while the distance was only 16 kilometres. In Zierikzee, the boat would moor at Het Luitje until 1958. After that, it moored at De Val to the south-east of Zierikzee. After the construction of the Zandkreek Dam between Noord-Beveland and Zuid-Beveland, the ferry departed from the ferry port in Kats from 1961 onwards. This cut the sailing distance down to 7 kilometres.

Because of its modern construction and building method, the bridge attracted the interest of many bridge builders from home and abroad. The Zeelandbrug was the longest bridge in Europe up until 1972. Fifty years after its construction, the Zeelandburg was declared a national monument. The Dutch Cultural Heritage Agency calls the bridge “a winner when it comes to post-war infrastructure”. Together with the Oosterscheldekering, the Zeelandbrug is one of the most photographed waterworks in Zeeland. Countless photographers have already dared to capture this almost endless row of pillars. From the dike just east of Colijnsplaat, you can get an excellent view of it – although every photographer will have his or her own opinion as to what exactly is the perfect photo spot.

It is somewhat less well known that the Zeelandbrug is at least as beautiful underwater as it is above. The bridge pillars and stones are lushly covered with vegetation and you can spot mullet and sea bass here. Yet the vast majority of divers come here for the chance to see seahorses and spawning cuttlefish.