Zeeland and the rest of the Netherlands became acquainted with new products thanks to the overseas voyages of the trading companies in the seventeenth and eighteenth centuries. One of those products was cocoa. It was introduced into Europe from South America. Initially, drinking a cup of cocoa was a popular pastime only among the elite. A cocoa and chocolate industry also sprang up in Zeeland. Zeeland chocolate became world-famous. Technical advances made the chocolate factories obsolete over the course of the nineteenth century.

Where cocoa came from

Cacao beans are the seeds of the fruit of the cacao tree. It grows in South America. Europe learned about cocoa beans from the voyages of Christopher Columbus and Hernando Cortez. The explorers came into contact with the Aztecs. The Aztecs used cocoa and had adopted this practice from the Mayans. Columbus and Cortez brought cocoa beans back with them to Europe. The word ‘cacao’ is probably derived from the Aztec word ‘cacahuatl’. The word “chocolate” is mot likely derived from the Mayan word ‘xocoatl.’

At first, the Spanish found that cacao tasted quite tart and bitter. This is why it was later sweetened with sugar. After a while, cocoa became more and more appreciated in Europe. It was mainly the elite who drank cocoa, because it was very expensive. However, because of its stimulating properties, cocoa was also prescribed as a medicine and was available in pharmacies.

The first cocoa houses started to appear in Europe in the seventeenth century. Special chocolate crockery sets were designed and manufactured for the new drink. In order to process the cocoa, chocolate mills were built. The mills ground the roasted beans into a thick paste. The addition of sweeteners such as sugar and vanilla softened the bitter taste. Zeeland, in particular, had a lot of cocoa mills. 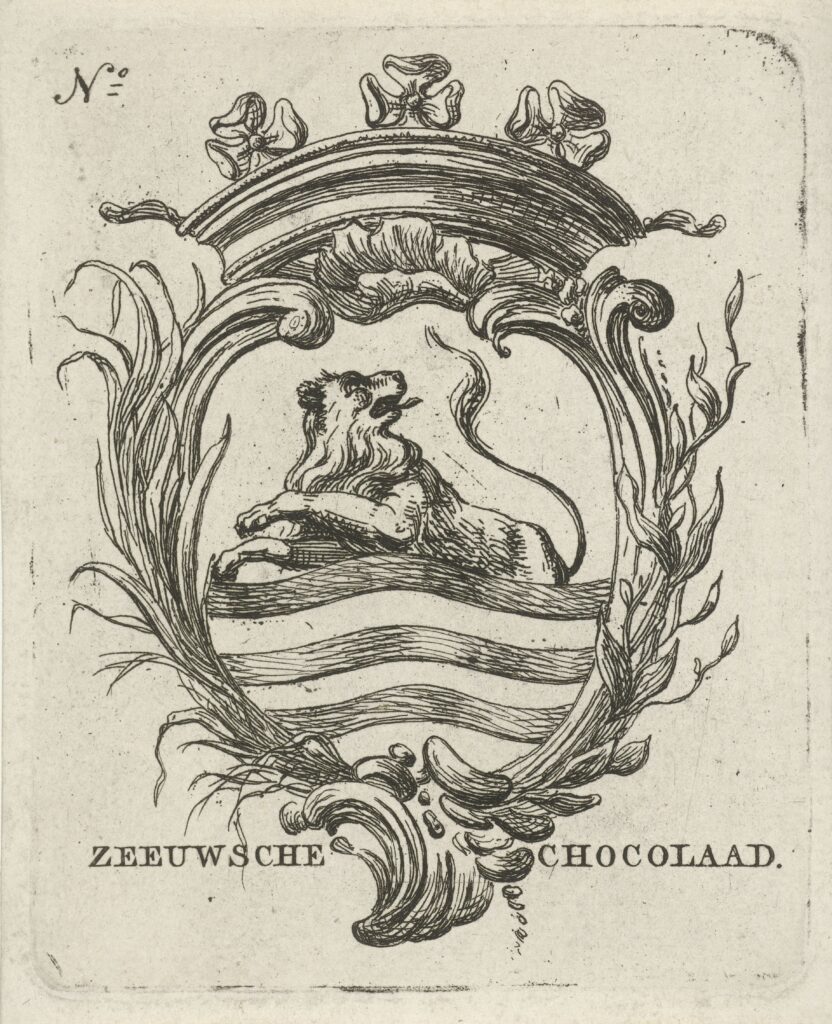 Design for a wrapper for Zeeuwsche Chocolaad by the Amsterdam printmaker Hermanus Fock (1766-1822) (Rijksmuseum Amsterdam).

In Middelburg in the eighteenth century, chocolate mills were located on the Kerspelstraat, Bellinkstraat, Spanjaardstraat, on the Buitensingel, behind the Branderij and on the Dam. Chocolate in solid form was only produced from the second half of the nineteenth century onwards. The thick chocolate pulp was solidified in moulds to form tablets. By then, ‘Zeeuwsche Chocolaad’ (chocolate from Zeeland) was famous at home and abroad. A special designation indicated the quality of the chocolate tablets: from A to AAAAA. The more As, the higher the quality.

In the early nineteenth century, there were 27 chocolate factories in the Netherlands. Sixteen of these stood in Zeeland: thirteen in Middelburg and one each in Vlissingen, Goes and Zierikzee. In 1828, Van Houten invented the cocoa press, which enabled him to make cocoa powder. This sped up production and chocolate became cheaper as a result. The Middelburg chocolate industry could not compete with that. There were only four chocolate factories left in Middelburg by the middle of the nineteenth century.

The factory of Fak Brouwer en Zoon in the Korte Noordstraat was the last to survive. In the end, six workers were still employed there. A horse drove the chocolate mill. In 1893, the factory closed its doors. The three remaining workers had to find other work. That is how Zeeland’s chocolate production came to an end.