‘Hutspot’, ‘stamppot’ and ‘erwtensoep’: they are all part of the same family. They originate from the one-pot meals that were eaten in the Middle Ages. The various ingredients were then mixed together, not yet mashed. Potato mash was only introduced in the twentieth century. 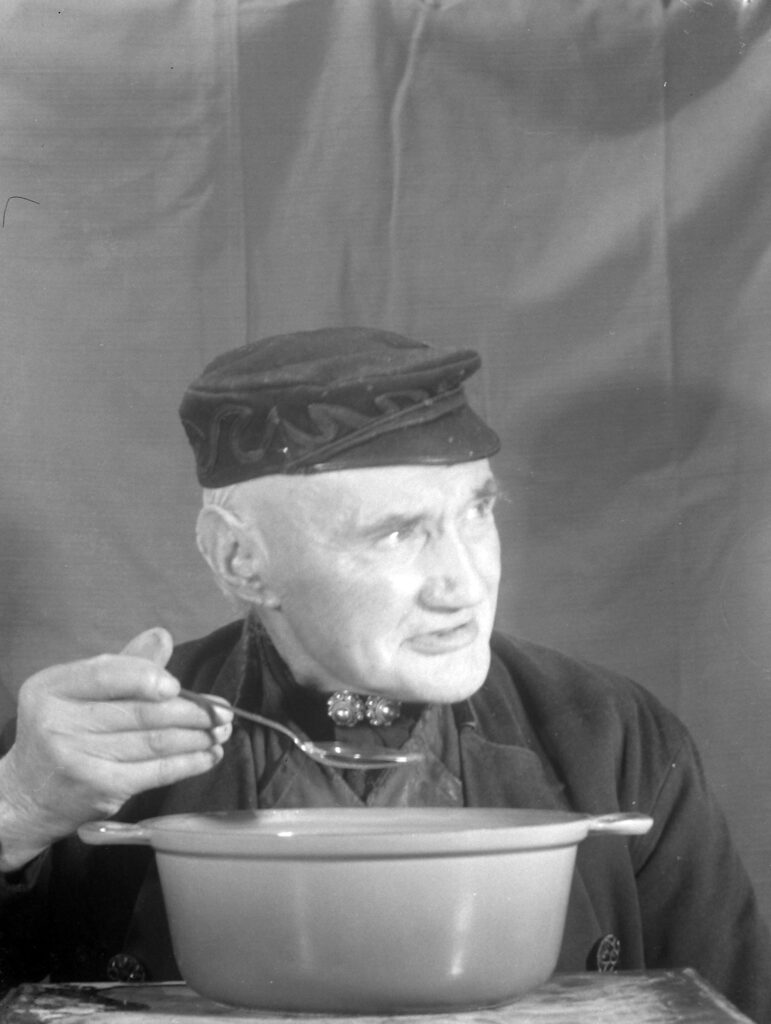 In the Middle Ages, food was prepared in one large pot or cauldron, which hung above the open fire in the hearth. People also used the term ‘hussepot’ or ‘husselpot’, which refers to the mixing up of the ingredients. This is where the name ‘hutspot’ comes from. We know Hutspot as the dish that the Spaniards left behind near Leiden in the night of 2 to 3 October 1574 when they withdrew in haste. It was probably a mixture of parsnips, carrots, onions and meat in the pot. But not the mashed potatoes, carrots and onions as we know the hutspot of today.

There were also fluid one-pot meals. These contained vegetables, legumes (peas, beans, lentils) and meat. Such a mixture was left to simmer on the fire for hours. These dishes were called ‘pottagie’, ‘pottage’ or ‘soppe’. This is where our split pea soup comes from.

In Zeeland, people used to make ‘vosse soppen’ until the twentieth century. Vosse is Zeelands for fresh. Everything from home slaughter that was not smoked, salted or covered in fat was called ‘vosse’. The term ‘soppen’, as in ‘sop’, is a reference to the liquid one-pan dish. Vosse soppen were made up of pears, turnips and potatoes that had been cooked in or covered with the pork fat or meat juices of a slaughtered pig. These were eaten with bread that had also been soaking in the fat for some time (‘soppen’). 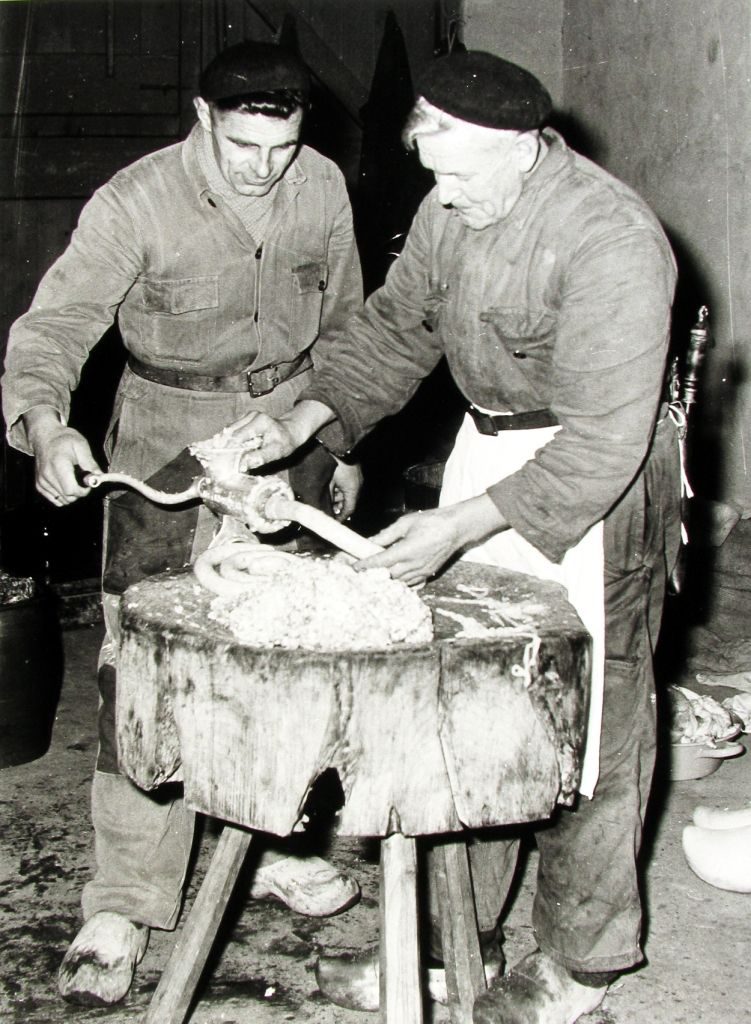 Jan Vader, who published stories about rural life in Walcheren, has passed down an account of just such a meal around 1900. The vosse soppen took place on the evening after the day of home slaughter (‘keutjesdag’ – piglet day) in November. Family members and neighbours were often invited to this feast. The meal started off with coffee. Then came the first course: dishes with mashed potatoes, with whole peeled turnips, with cooked, unpeeled pears and a smaller bowl with bread. The bread had been lying in the hot lard for some time and was completely soaked. The turnips and pears had also been cooked in lard.

As if that were not enough, another course was served at the table. This consisted of a huge dish which contained almost all the offal of the pig, laid out: large chunks of the heavy pig’s head, the front part of the rump, the tongue, kidneys, heart, most of the liver and the ears and trotters. The tail and lungs also sometimes formed part of this dish, but the flavour of these was disputable. This was accompanied by home-baked bread. Apparently, everyone enjoyed this meal and, according to Jan Vader, passing wind and burping were not uncommon after the meal.

In the eighteenth century, more and more people started eating potatoes. Recipes that combined potatoes with smoked bacon or sausages and with kale oras the Dutch called it ‘boerenkool’ (‘farmer’s cabbage’ in English, which, incidentally, was not called that until the nineteenth century), sauerkraut, carrots, sweet apples or stewed pears. In all cases, the various ingredients remained recognisable. In other words, it was a ‘husselpot’ – a kind of stew, and the ingredients were not yet mashed together. ‘Stamppotten’ (vegetables and potatoes mashed up together), only made their appearance in the twentieth century. The Zeeland name for stamppot is ‘prol’. For instance, there is ‘appelprol’ (apple sauce), ‘preiprol’ (leek mash) and ‘juunprol’ (onion mash).

A dish that is remotely reminiscent of the hussepot of old is Nieuwjaarskost (New Year’s Stew) as eaten in Zeeuws-Vlaanderen around Terneuzen, Hoek, Zaamslag and Axel. It is a meal intended for family members who come over to wish them a Happy New Year on New Year’s Day. It is tasty and simple, and assumes that everyone is still full from the delicacies eaten on New Year’s Eve. The dish is made up of potatoes, white beans, salted string beans and sausage. The sausage is boiled gently and the broth is kept. The white beans and string beans are soaked first and then cooked in one pan. The potatoes are boiled separately and then added to the beans with a few spoonfuls of stock. The next day (New Year’s Day), the pot of potatoes and beans and the pot of sausage and stock are heated up. Nothing is mashed. That is why this pot of beans and potatoes is somewhat reminiscent of the one-pot meals of old. Traditional winter fare to start the new year off on the right foot.