In many towns in Zeeland you can still find a splendid monumental town hall. In the past, everything was arranged here. From public service matters to the administration of justice. These days, Zeeland’s municipalities are housed in town halls that are more practical when it comes to office space, but you can still visit many of the old town halls. They now house museums or you can take a guided tour.

The town hall of Middelburg was built in the fifteenth century in the Gothic style of the late Middle Ages. It has the appearance of being a beautiful, historic whole, but over the centuries (especially in the twentieth century), the town hall has undergone numerous changes. Like many Flemish town halls, this one was not only the governmental centre but also a meat market hall and a cloth market hall. The master builders were therefore also Flemish. Half a century after the first construction stage, work on the building continued and the town hall added the tower and the statues of Zeeland counts and countesses that adorn the façade. So, throughout the centuries, work on the town hall has been ongoing. The town hall was severely damaged during the Second World War. A large part of the modern-day town hall is no longer original, but has been restored. The inner part is almost completely new, but retains its historic appearance. If you would like to take a closer look, you can join a guided tour during the tourist season. 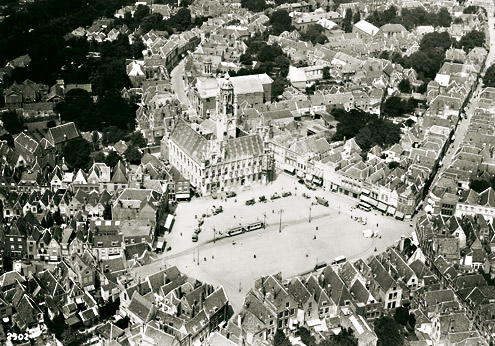 Before the Second World War, the Middelburg Market was called Groote Markt: the fifteenth-century town hall occupied a central place on the square. Aerial photograph around 1930 (Zeeuws Archief).

In the 16th century, Zierikzee’s town hall was replaced by a newer version and that building is still standing today. On the groundfloor, you will find a large, medieval-looking hall with large pillars. This room used to serve as a court of law. On the first floor, you will also find a courtroom and the former council chamber, which later became a wedding hall. Another floor higher up, the town hall boasts an impressive hall with a magnificent, original ceiling design. You can easily visit the building, as it is now home to the Stadhuismuseum Zierikzee (Town Hall Museum.) They themselves claim that their biggest and most impressive exhibit in the collection is the building itself, but there are plenty of other treasures to see as well. You can combine a visit to the Stadhuismuseum with a visit to Gravensteen, which used to be a prison.

The town hall of Veere is also a museum – it forms, along with the Schotse Huizen around the corner, Museum Veere. In the same Schotse Huizen, you can admire the original statues of the town hall. The seven statues, representing the lords and ladies of Veere, were exposed to too much damage from the weather in the open air. That is why they were replaced by replicas in the twentieth century. The originals are safely displayed inside. The façade of the town hall is still adorned with original stone pillories: two square stone blocks, connected by a heavy metal chain. They are painted black and white, in the city colours. Under medieval criminal law, these stones had to be worn as punishment for, for example, slander, cursing, fighting, theft, adultery or harlotry. The stones usually hung on the wall of the building where the verdict was passed. Veere is one of the few places where this is still the case. Other items in the museum are reminders of the administration of justice. There are bronze fists, for instance. When someone had committed a serious offence, they had to have such a fist made as a punishment (and that cost quite a lot of money).

Seven statues, ‘the Lords and Ladies of Veere’, made by Michiel Ywijnsz in 1517-1518, decorated the façade of Veere Town Hall (Stichting Behoud Veerse Stadhuisbeelden).

In Sluis, you’ll find the only Dutch town hall that has a belfry (a Flemish bell tower). A prominent detail of this building is the wooden statue of Jantje van Sluis that is set in one of the windows of the tower. There is a mechanism behind Jantje that triggers the striking of the town bell every hour and a half. Jantje was honoured with this statue because he is said to have saved the town from a Spanish attack. The town hall was severely damaged during a bombardment of Sluis in the Second World War, but the statue remained intact, although it did fall down.

This building is no longer in use as a town hall either. It now houses the Belfort museum which has a special section dedicated to Johan Hendrik van Dale.

What immediately stands out about the Goes Town Hall is its gothic donjon (defensive tower) on the right-hand side. This tower was also the first thing to stand here and, from here, the compound was expanded further. The donjon section was used as a prison for a long time. Justice was also administered in this town hall. You can see that from the statues of Lady Justice and Lady Prudentia in the façade. So, in the past it was all about justice, but now it is all about food. There is a restaurant here these days. 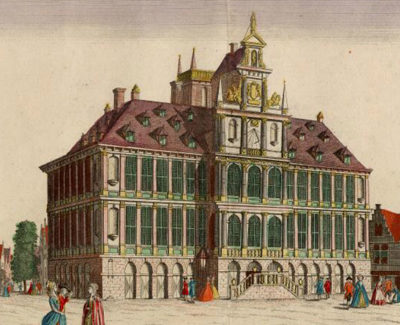 The Vlissingen Town Hall, built in 1594 on the Grote Markt, circa 1740. The building was destroyed during the English bombardment of 1809. (Zeeuws Archief, Historical Topographical Atlas Vlissingen).

If the lore of the land is to be believed, then Vlissingen once had the most beautiful town hall in Zeeland. Many old town halls have since been turned into museums, but Vlissingen’s town hall was already a kind of museum while it was still in use. All the rooms could be admired and special exhibits were on display: many rarities such as a stuffed lion, but also portraits of governors. At the beginning of the nineteenth century, Vlissingen’s town hall was completely destroyed after being bombed by the English. It was not until the mid-twentieth century that Vlissingen regained an official town hall. 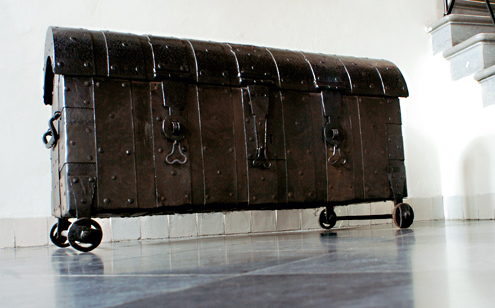 The Tholen chest on wheels in the former town hall of Tholen.

Tholen has a town hall that dates back to the 15th century. It was built after the great town fire. It is a relatively narrow building. You can see battlements on top with lions bearing coats of arms. The building is crowned with a six-sided tower. It is possible to tour the town hall – several interesting objects are on display there. One of them is a large iron chest fitted with three locks. Important documents were kept in it and by dividing the keys up among several people, nobody could sneak off with the contents. There are more of these types of chests in the Netherlands, but what makes this one special is the fact that it has wheels underneath it. This made it easy to move the chest to safety. This happened, for instance, during the siege by the French in the 18th century.