Back in May 1960, Queen Juliana rode in a jeep over the brand-new Zandkreek dam between Zuid-Beveland and Noord-Beveland. The dam marks the entrance to the Veerse Meer. It was completed with the closure of the Veerse Gat Dam between Kamperland and Vrouwenpolder in April 1961. The tempestuous inland sea of Veersche Gat, Zuidvliet and Zandkreek was no more, the Drie-eilandenplan (three islands plan) had been accomplished. This plan dated back to before the February 1953 disaster and was incorporated into the Delta Plan. 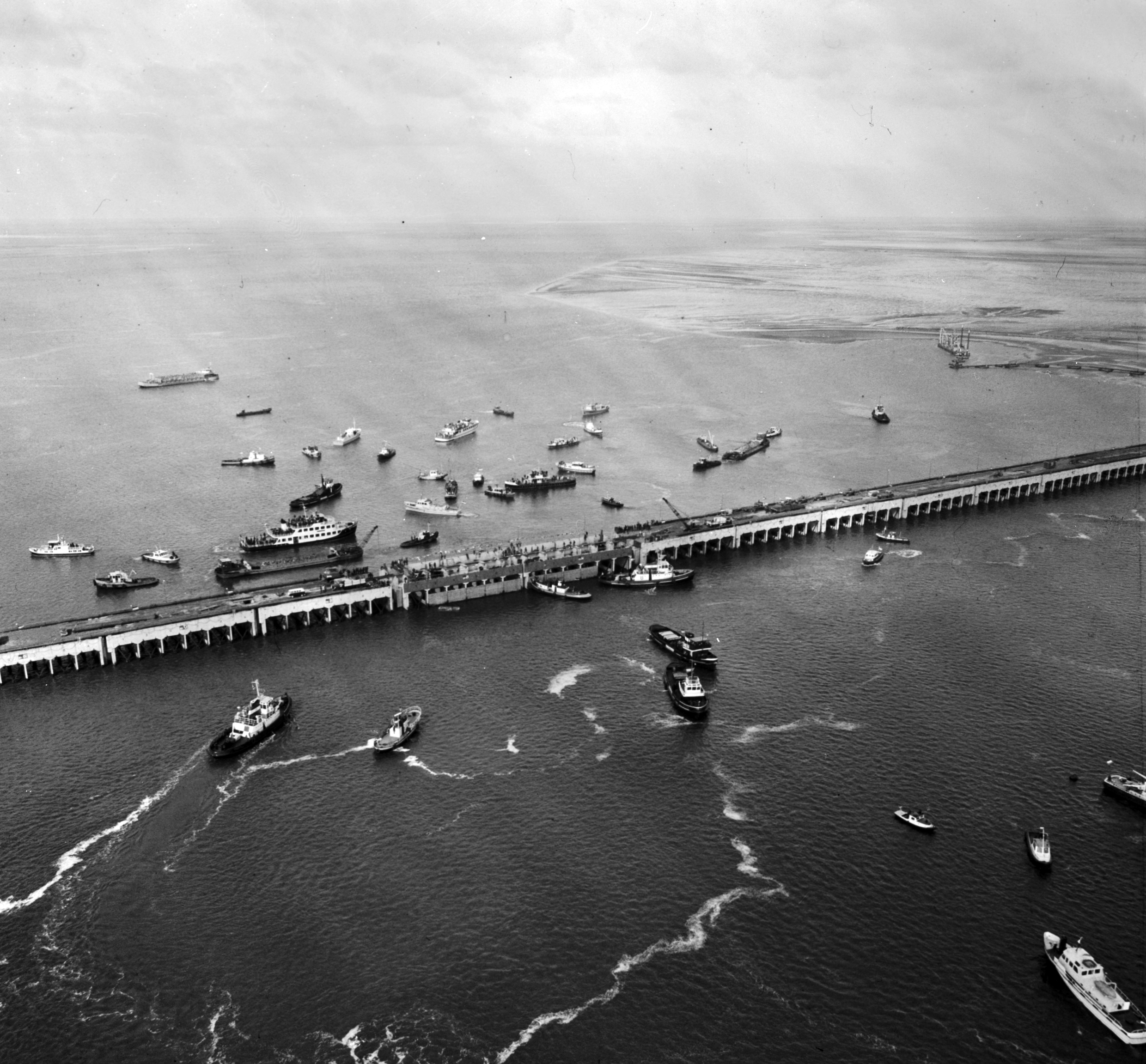 Closure of the Veerse Gat Dam, 27 April 1961 (Image bank of the Dutch Directorate-General for Public Works and Water Management, https://beeldbank.rws.nl).

Thanks to the two dams (and the Sloe Dam dating from 1871), a lake of brackish water with a length of 22 kilometres and a width of 250 to 1,500 metres arose between the Oosterschelde and the North Sea. The opportunities for all kinds of water and shoreside recreational activities were immediately apparent. As early as 1959, a design with marinas and water sports facilities was presented. The expectations were met: within a decade, Delta Marina in Kortgene (700 berths, one of nine marinas on the lake) became one of the largest marinas in the Netherlands.

Even the historic jewel of Veere saw a strong revival in terms of tourism. The fishing fleet relocated to Colijnsplaat on the Oosterschelde because of how it was dammed off. The majority of artists, hundreds of whom had lived in the town since around 1890, also left. Yet tourism brought new life to the town with the addition of a few marinas inside and outside the town. Another bonus point: the Kanaal door Walcheren provides a connection to the Westerschelde and the North Sea via the sluice gates at Veere. 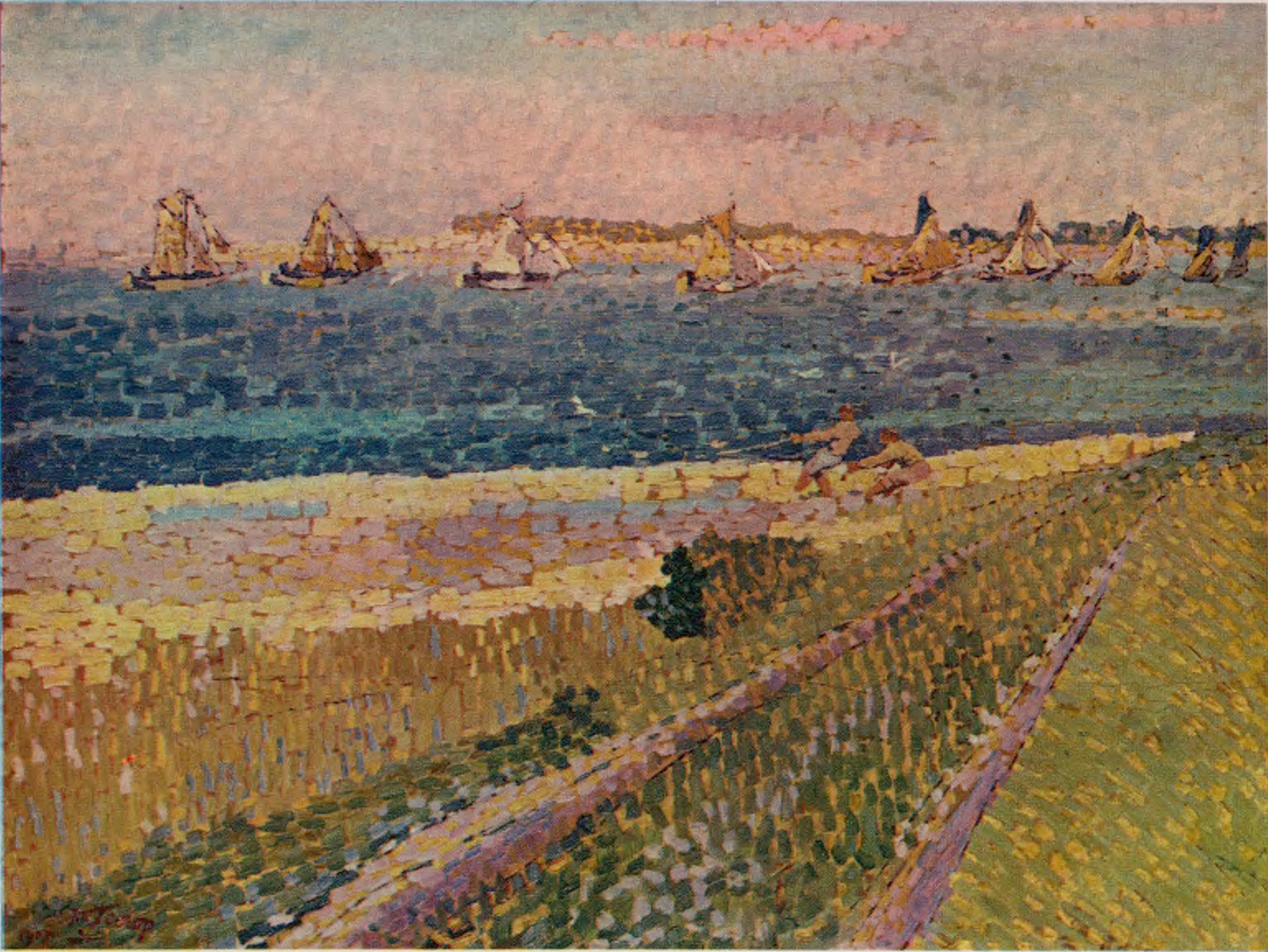 Fishing fleet on the Veersche Gat, as seen from Noord-Beveland. Painting by Jan Toorop, 1907.

The watersports facilities at the lake were expanded with public boat ramps and over three kilometres of jetties, not to mention three hundred metres of bathing jetties including one for fishing. Harbours for sport fishing were built at De Piet and Wolphaartsdijk, aswell as a canoe harbour at De Piet. The first windsurfing centre opened its doors in 1984 at the Schotsman near Kamperland.

The layout of the lake also incorporated extensive forestry planting. The walking trails and forest areas cover about 265 hectares, in addition to 120 hectares of playgrounds and sunbathing areas.

The lake has seventeen islands, ten of which have been artificially raised, such as Zandkreekplaat and Spieringplaat. Islands from before the damming include Haringvreter, Middelplaten and Aardbeieneiland. Some of these, such as Aardbeieneiland, have grown unusual vegetation. The (nowadays) wooded Haringvreter owes its name to the fishermen’s nickname for seals (‘herring gobbler’), that used to sunbathe here.

Twelve islands are open to the public, five are bird sanctuaries. Only the (publicly accessible) Haringvreter is visited annually by approximately 40,000 wigeons, smew, red-breasted mergansers and goldeneyes from Northern Russia and Scandinavia. The Middelplaten, which is also of great scientific value, is only accessible on guided tours.

There is also a nature reserve on the south side of Goudplaat which is famous for its przewalski horses. This shelf of land also dates from ancient times, just like the Schotsman area. It appears as an ‘opwas’ (a spontaneously surfaced island) on maps from the seventeenth century. 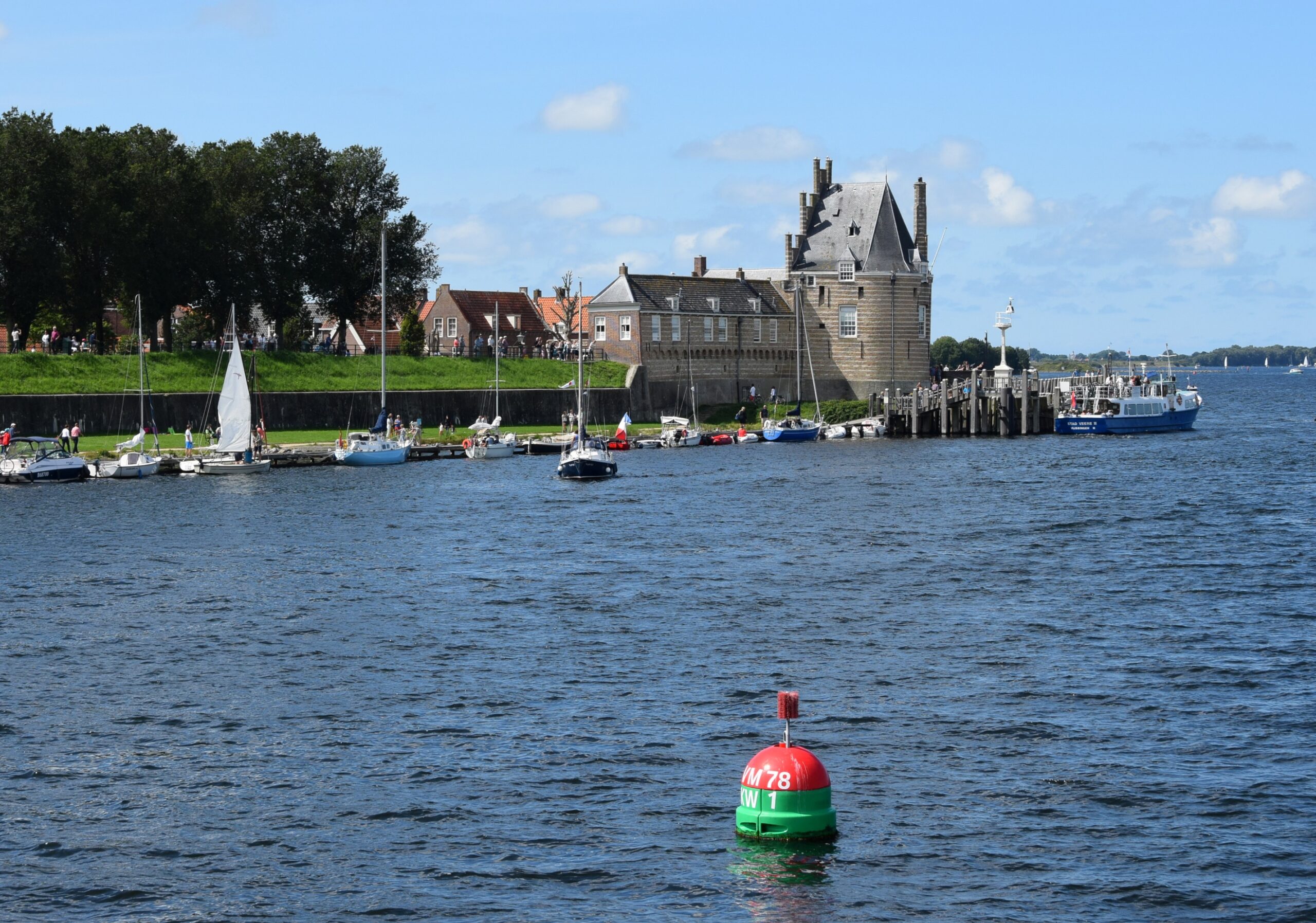 View of the Campveerse Toren (tower) in Veere as seen from Lake Veere (photo by H.M.D. Dekker).

After the disbandment of the recreation association Het Veerse Meer in 1999, the current water authority Zeeuwse Scheldestromen is in charge of the management. Staatsbosbeheer (State Forestry Administration) and Vereniging Natuurmonumenten (Society for the Preservation of Nature) manage the nature areas. The interests of commercial shipping, agriculture, fisheries and nature conservation play an important role in this management.

Management problems have always been an issue. The disappearance of the tidal effects caused a steady erosion of the embankments. This has mainly been combated by building gravel dams. Another example: the extreme growth of algae, especially in the period around 2002/2003. As a result, the large seagrass beds have been lost due to a considerable reduction of light.

The introduction of wild game and ‘large grazers’ also caused difficulties. In 2019, for example, the wild Konik horses had to be removed from Goudplaat, because their numbers had grown too large. The surplus of fallow deer on the Haringvreter were shot for the same reason

The tourism success of the Veerse Meer also had its downsides. The proliferation of accommodation facilities, from basic campsites to luxury holiday parks, proved to be a trend that persists to this day. Along with discussions about the advantages and disadvantages of increasingly busier commercialisation. Around 2010, for instance, a conflict arose between building plans and daytime recreation at Oranjeplaat near Arnemuiden. Quite recently, the plan for the Zeeland Lagoon at the Veerse Gatdam was torpedoed by the municipality of Noord-Beveland in 2017. Four new islands with appartments and holiday homes were supposed to be built here.

In order to improve the quality of the Veerse Meer, a number of successful measures have been taken. In 2004, the Directorate-General for Public Works and Water Management opened the ‘Katse Heule’ bypass in the Zandkreek Dam. The supply of saltier Oosterschelde water through two sealable shafts proved to be a ‘resounding success’. A low tide of, at most, 12 centimetres was restored.

Around 2010, another improvement was made by raising the winter water level to 30 centimetres below sea level. Apart from a better living environment for plants and animals, this also extended the tourist season. 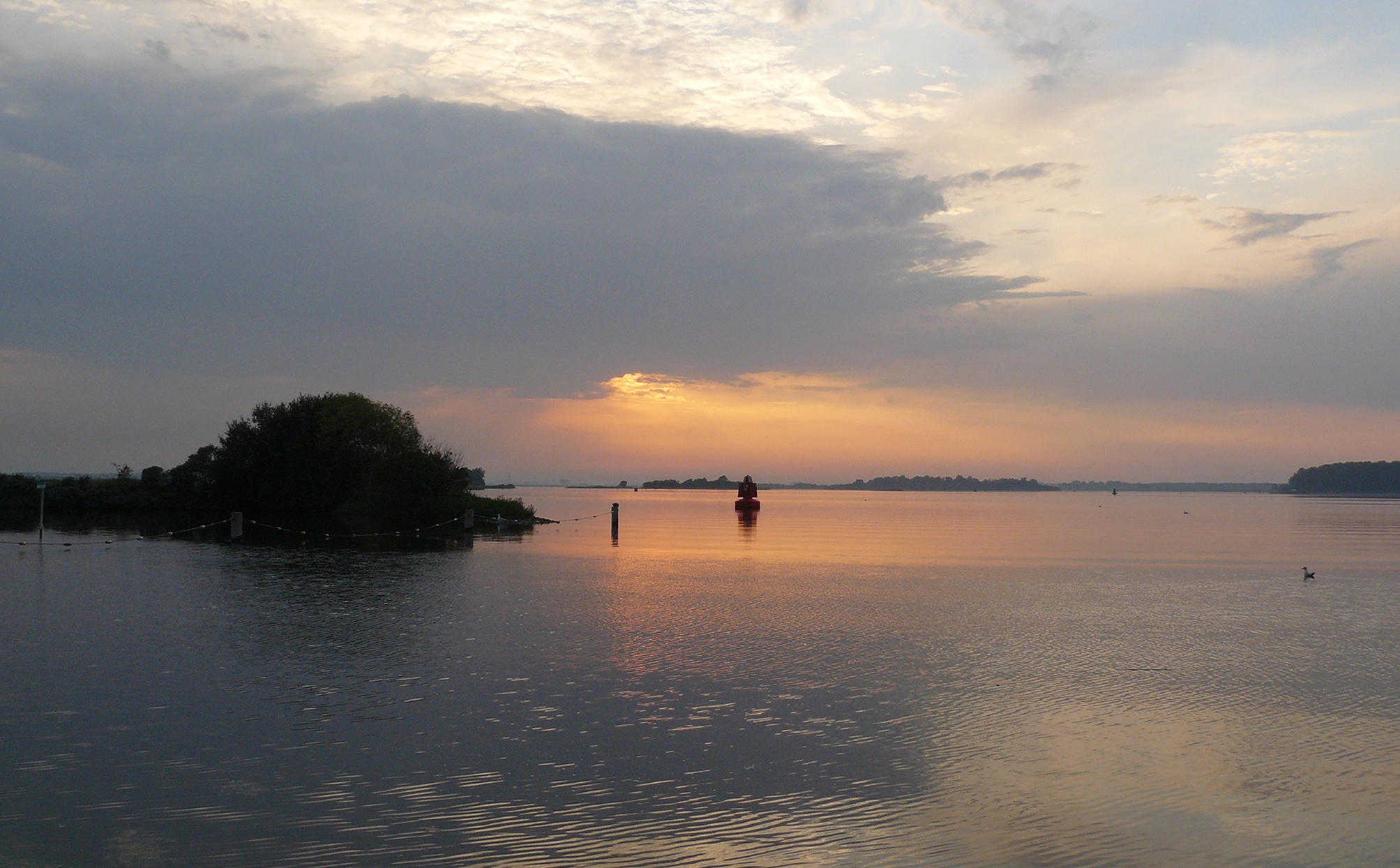 These improvements made it possible to do experiments with aquaculture: for example, the capture of mussel seed, mussel bed culture at Geersdijk and the Katse Heule, oyster bed culture at Veere, beds for cockles and other shellfish at Kamperland. A plan from 1959 for a test tank for oyster farming at the Veerse Gatdam was not put into practice at the time. After half a century, the long-held dream was nevertheless fulfilled in another form.