The television tower in Goes is a real eye-catcher in the Zuid-Beveland landscape. It was thanks to this transmission tower that Zeeland received television in 1957. Apart from that, the tower was also important for other communication systems. The development of the media landscape and technology rapidly gained momentum. Nevertheless, the television tower remained a beacon in the surroundings due in part to art initiatives. 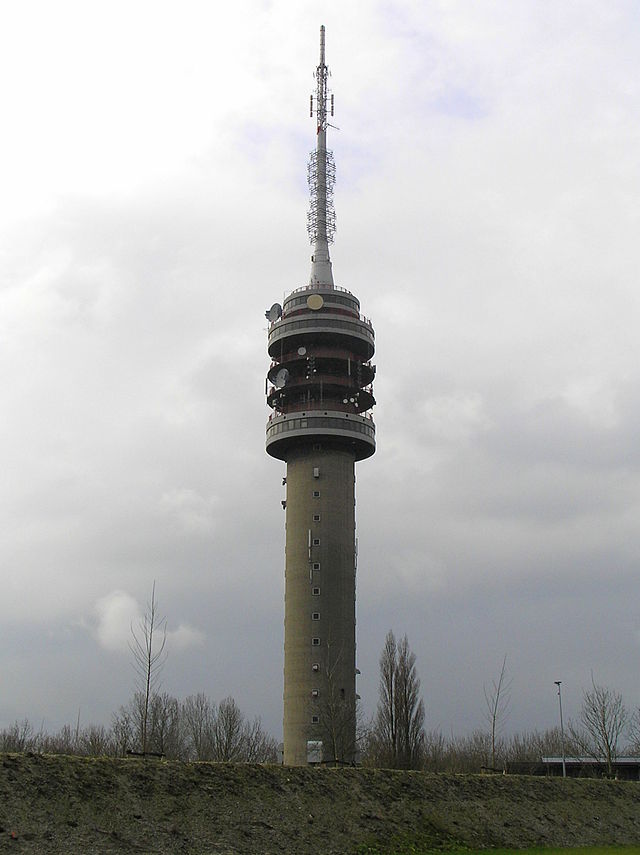 The television tower in Goes is 137 metres high nowadays, including the mast. In 2007, the analogue transmission tower was replaced by a digital one. That made a difference of 11 metres in height. Before that time, the tower was 148 metres high.

Oldest in the Netherlands

Programmes had already been broadcast from Bussum since 1951. Zeeland was therefore only able to watch television six years later, but the television tower in Goes is nevertheless the oldest in the Netherlands. The tower was not only used for broadcasting television, but for radio and telephone as well, among other things. The construction of the tower in Goes was even given priority because of the opportunity to use it for telephone connections. During the floods of 1953, many telephone cables were destroyed and people realised how important it was to provide an alternative facility for this.

The construction of the tower began in 1955. A new technique was used for this. Layer by layer, fluid concrete was poured onto concrete that had already hardened in the meantime. The transmission tower was then erected on top of the concrete tower. 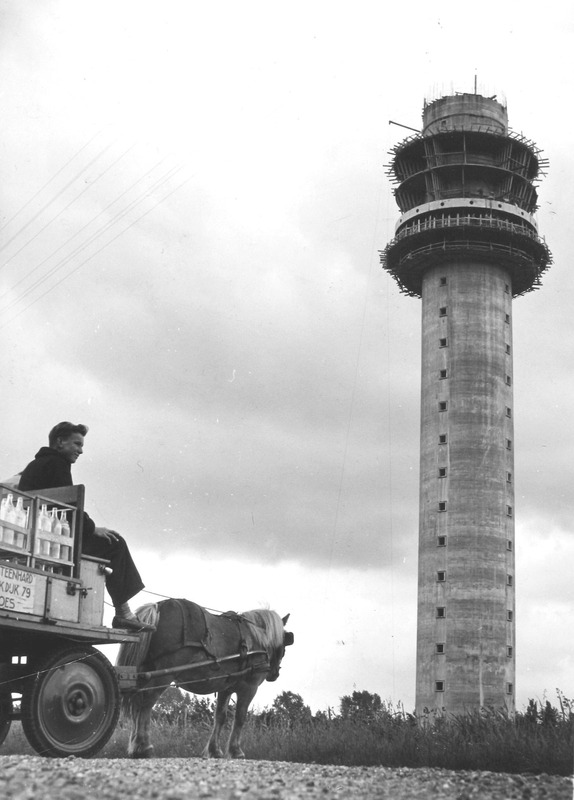 The construction of the television tower in 1956 (ZB, Image Bank Zeeland).

After a number of test broadcasts, the day arrived on 10 December 1957. With a press of a button by the then Queen’s Commissioner A.F.Ch. de Casembroot, KRO presenter Hannie Lips appeared on television screens in Zeeland. 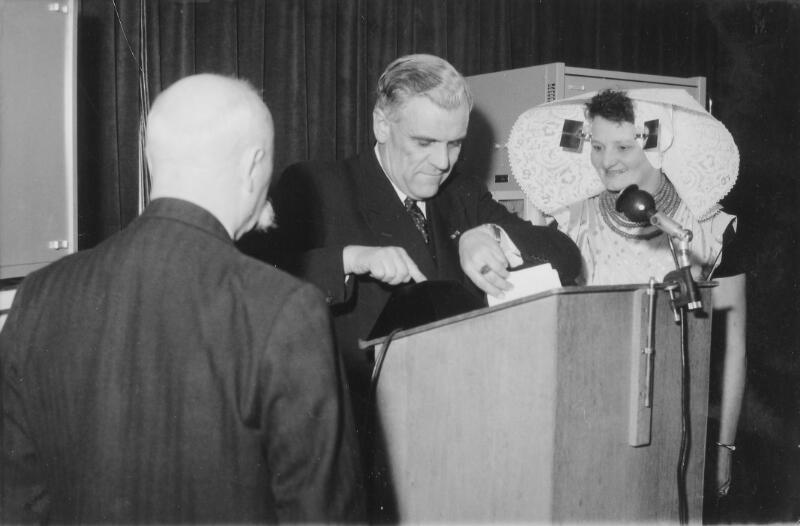 The Queen’s Commissioner De Casembroot inaugurates the television tower with a single press of a button (ZB, Image bank Zeeland).

The Netherlands immediately watched a show from Zeeland that very evening. A live television broadcast was made from the Prins van Oranje theatre in Goes. The first thing viewers in the rest of the Netherlands saw was a performance by the musical group Con Affezione from Kwadendamme, dressed in traditional regional costumes. The show lasted forty minutes and ended with the singing of the Zeeland ‘national’ anthem. 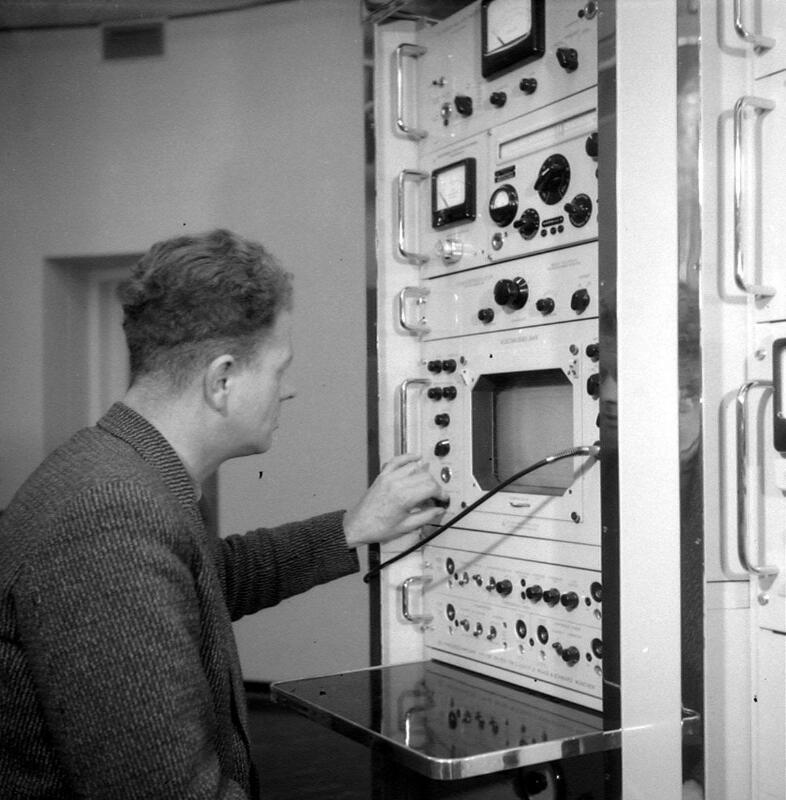 Talk of the town

The arrival of the television tower was important in terms of the connection with the rest of the Netherlands. Zeelanders started watching the same television programmes as the rest of the Dutch population, regardless of which province they lived in. A television broadcast could therefore be the talk of the town the next morning throughout the Netherlands. Incidentally, the number of people who owned a television set in the early days was still limited. This number increased considerably in the 1960s. Antennas were placed on the roofs of houses for the reception of television broadcasts. 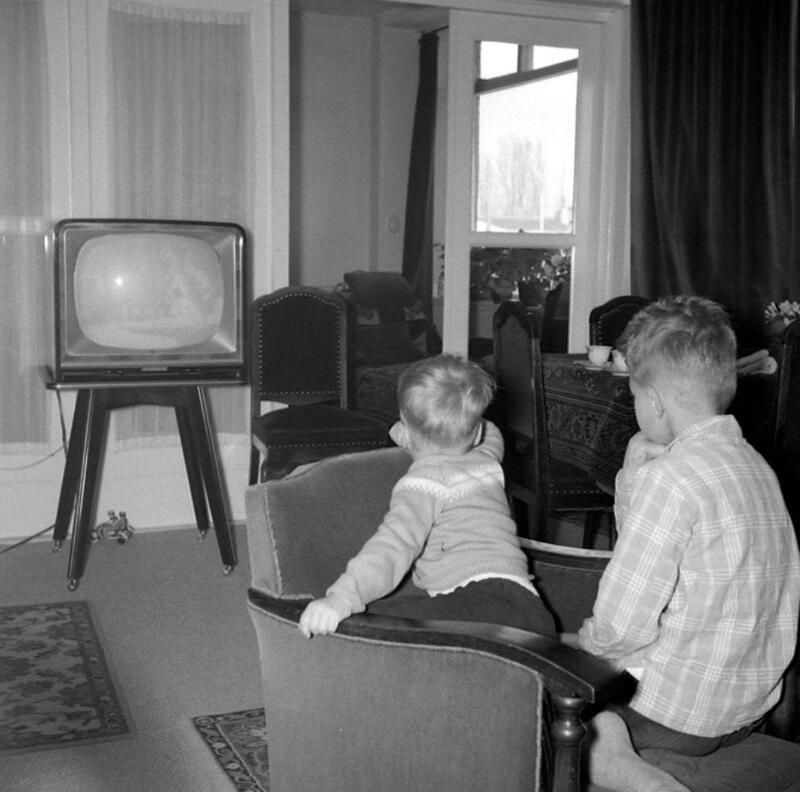 The first cable networks appeared in 1970 and were then increasingly operated by municipal services. Even later, these municipal cable networks were linked up and made use of a single reception station. These years also saw the first signals on cable that were not also being broadcast over the airwaves. These were local and commercial broadcasters.

After the European liberalisation of the telecommunications sector in the mid-1990s, more and more cable networks were interconnected via fibre optics. Private cable companies took over most municipal networks and modernised them. The number of analogue stations being broadcast via the cable grew.

In 1990, Zeeland was the last province in the Netherlands to get its own regional radio station. Omroep Zeeland established itself in the former town hall of Souburg. Seven years later on 1 October 1997, the first television programme from Omroep Zeeland followed.

From this time onwards, the TV tower in Goes also attracted attention through projects by the StichtLicht art collective. The television tower was put in the spotlight for the first time in 1997 and the reactions were very favourable. The tower is now lit every Thursday, Friday and Saturday and is given an appropriate colour on special occasions.

Many of the rooms in the television tower were left vacant due to all the technical developments. In 2012 a company from Terneuzen housed a data centre in the building.

More stories about the TV tower can be found on the tvtorengoes.nl website.