In the seventeenth and eighteenth centuries, the Republic of the Seven United Provinces played an active role in the slave trade. Zeelanders were also involved in this trade. The slave trade was part of what is known as the triangular trade. The West India Company (WIC) and the Middelburgsche Commercie Compagnie (MCC) sailed from Zeeland to West Africa to buy and enslave people. Private individuals also participated in this trade. The victims of slavery were taken to South America to work on plantations. From South America, the ships returned to the Netherlands with their merchandise. The slave trade was officially abolished in the Netherlands in 1814.

The Dutch transport of victims of slavery was already taking place at the end of the sixteenth century. At that time, the traders did not earn much money from this. Besides the official trade by the WIC that was founded in 1621, a very profitable smuggling trade in victims of slavery also existed. The illegal slave traders were also called ‘lorrendraaiers’ – the Dutch term for slavedrivers. The WIC wanted to stamp out these slavedrivers. In spite of the heavy-handed measures they took, they did not succeed. 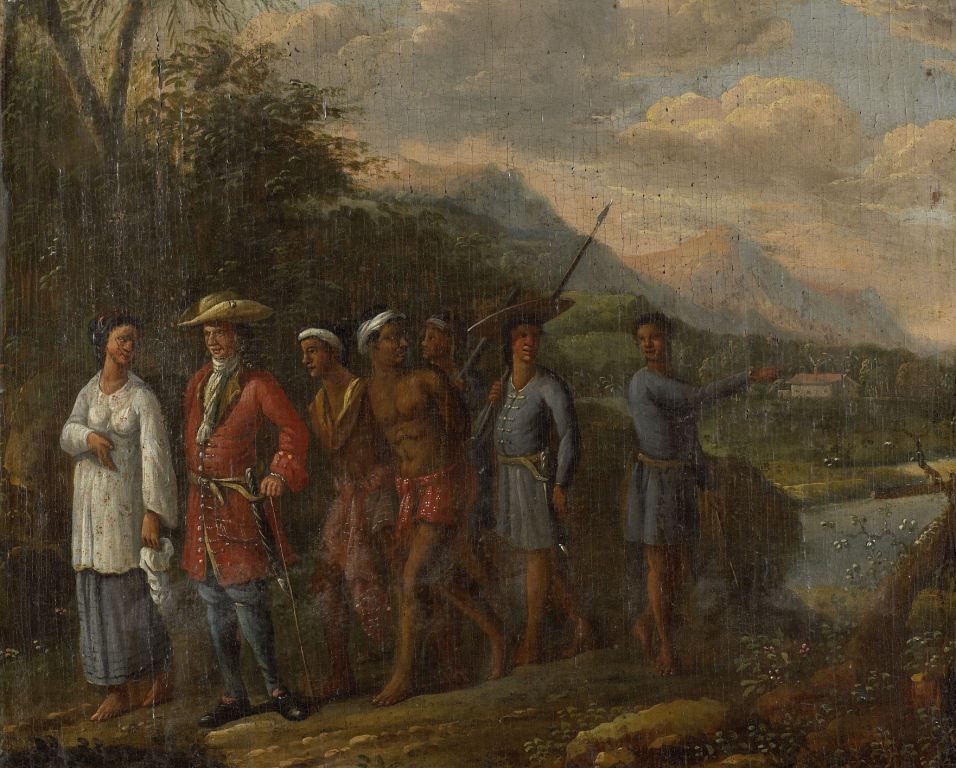 In 1730, the WIC lost its exclusive right to the slave trade between Africa and South America. This led to an increase in the transport of victims of slavery by private traders. Vlissingen’s merchants traded on an individual basis or in small combinations of companies. Sometimes the traders used a trading company as an association form. Middelburg merchants united themselves in the MCC. A total of 311 triangular voyages were undertaken by private individuals.

The slave trade was part of what was known as the Transatlantic triangular trade. Slaves formed the largest part of the ‘interim cargo’, the trade goods that merchants transported from Africa to America.

The names of areas along the West African coast on the Gulf (Bight) of Guinea are a reference to this: Ivory Coast, Gold Coast and Slave Coast. This is where traders bought the first people who were victims of slavery. They also bought gold and ivory. Many slave ships then sailed further south to Loango or Angola. There, traders purchased the remainder of the victims of slavery. Over the course of the seventeenth century, ‘demand’ skyrocketed. Trade ships then often sailed back and forth along the coast for a long time in order to procure slaves.

The purchase of victims of slavery was conducted via African slave traders. Initially, this took place in one of the Dutch trading posts or forts along the West African coast. Fort Elmina in present-day Ghana is well known for this. The captured men, women and children were locked up in the fort’s dungeons. Sometimes they were held there for months until they were sold.

Gradually, more and more of the purchasing took place on the beach or on board the ship. The ship’s doctor inspected the victims of slavery. Then the slave trader was paid. This was done with barter goods such as textiles, guns, gunpowder, alcohol, beads or cowrie shells. Africans who had been bought were branded and registered. The branding made it clear that from that moment on they had been branded as slaves. After being branded, the slaves were taken to the slave deck and chained up.

After a voyage by ship of an average of two months, the slaves arrived in the West Indies. The majority of them arrived on the island of Curaçao. It was there that a large slave market was set up to distribute the slaves across Central and South America. They were first examined by a doctor. From surviving reports, we know that the physical condition of the victims of slavery varied considerably. Sources speak of: “such a considerable armasoen [cargo] of fresh Coastal slaves, who were as fine a specimen as can be” but also “in a poor condition, as skinny as a skeleton.”

Before the Africans were sold off, they were washed and given good food. Sometimes the transaction took place on board. In most cases, however, it was done on land, either outright or at public auction. Heartbreaking scenes took place in the slave market. Mothers were separated from their children and brothers and sisters were auctioned off separately

In the eighteenth century, ideas about people and the world changed in Europe. A romantic image of Africans began to emerge. Some Europeans saw them as “noble savages” and valued them for their primitive, unaffected way of life. Partly because of this, objections to the slave trade grew.

In Britain, opposition to slavery and the slave trade grew at the end of the eighteenth century. Under pressure from the so-called ‘abolitionists’, the slave trade was banned for all British citizens in 1807. Great Britain was the first country to do this. The United States also abolished the slave trade in the same year. The Netherlands followed suit in 1814. However, this did not mean that slavery was completely abolished. This didn’t happen in the Netherlands until 1863.

The MCC archives, which are housed in the Zeeland Archives in Middelburg, have since been fully digitised and can be viewed online. In May 2011, the archive was included in the ‘Memory of the World Register.’ This is the Memory of the World list of UNESCO, the UN organisation for culture.

252 years ago, the ship called the ‘Eenigheid’ (The Unity) made a voyage via West Africa to the Caribbean. The goal: slave trade. The key figures of that time report daily on the events on board on www.eenigheid.slavenhandelmcc.nl.