With all that water, Zeeland can pose quite a challenge as far as habitation is concerned. There have been periods in the history of this region when no one lived here for a while. Yet the region always managed to attract new settlers. Numerous traces from different periods of prehistory have been unearthed, each telling their own story about the first so-called ‘Zeeuwen’.

It is generally known that Neanderthals once lived in Zeeland. Flint tools had already been found in the past (a very spectacular find was the huge flint fist axe about 100,000 to 150,000 years old – the oldest tool in Zeeland). 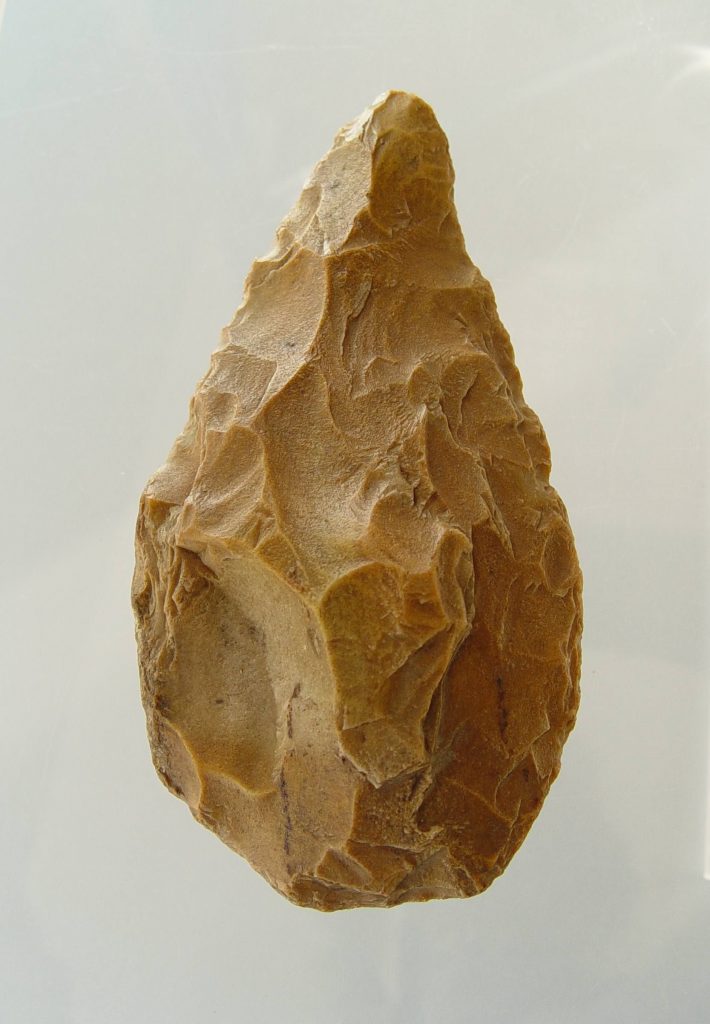 Fist axe recovered from the Eastern Scheldt near Schelphoek.

However, at the beginning of the 21st century, they really hit the jackpot. At that time, a skull fragment that had been discovered 15 kilometres off the Zeeland North Sea coast was found to belong to a Neanderthal. On account of his ‛Zeeuwse’ origin, archaeologists bestowed the Zeelandic name Krijn on him. He used to live here about 40,000 to 80,000 years ago. In the time of Krijn, the North Sea was completely dry and large herds of mammals were grazing there. This surely would have been a major attraction for Krijn and his contemporaries, who might have hunted giant deer, mammoths, wisents or reindeer. All that game also sometimes attracted other hunters. For example, the lower jaw of a gigantic cave lion found on the beach. 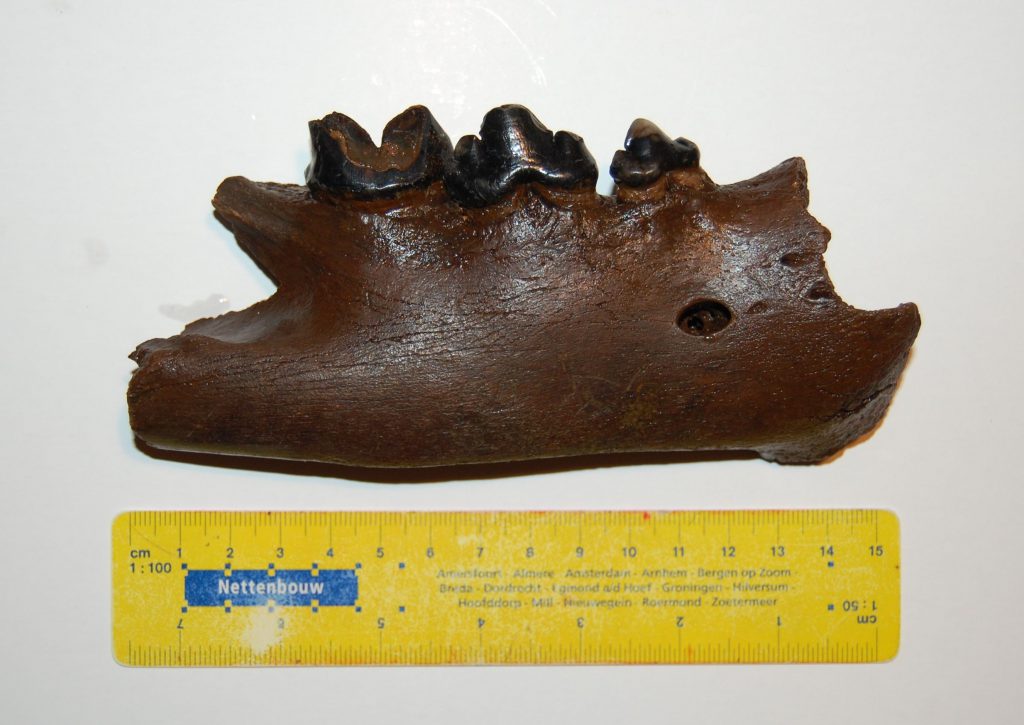 Traces from a distant past

Other traces dating back to the Stone Age have been found. One remarkable discovery is that of an antlered axe from the Ahrenberg culture – Zeeland is the westernmost point where anything of this kind has ever been found. Most Stone Age findings have been made in Zeelandic Flanders. At Sint Kruis, thousands of pieces of flint from the last ice age (about 10,000 years ago) were found in a field. This area is higher up than the rest of its surroundings. The landscape must have been fairly barren then and hunters would have had a good view of wildlife from here. Older, but also more recent Stone Age tools have also been found. The latter are probably from a hunters’ camp, where arrowheads were made and shot wildlife was slaughtered. Hunters’ camps with hearths and utensils have also been found near Aardenburg.

The switch to agricultural activities was made gradually. In the Drowned Land of Saeftinghe, 25 shards of a hanging pot from the period 4300-3400 BC were found. They are simple, grey-brown shards, but nevertheless tell an important story about a changing culture. Such pots were not used by hunters and gatherers. Who knows, perhaps it was used by wandering shepherds to transport things in.

Permanent settlement and the first farmers

During the New Stone Age, people established themselves in settlements in Zeeland. The most important known settlement from the New Stone Age is Brabers near Haamstede. At this site, the traces of two small farmhouses have been excavated. They are estimated to be about 4,500 years old. People probably lived here permanently or semi-permanently and hunting was still an important source of food then. Numerous arrowheads have been found here.

Near Baarland, the earliest tangible signs of the beginning of agricultural practices have been found, dating back to around 3500 BC. A lot of pollen was present in the peat in those days, which indicates the presence of grassland and clearings in forests. The suspicion is that these clearings were used to build small fields. Tools from the same era have been found in the vicinity, including an axe that may have been used to cut down trees. Also, near Burgh, a finding was made that seems to suggest that the first agricultural efforts went hand in hand with the felling of trees. Wooden farmhouses and a sharpened axe have also been found here. Research into the peat near Baarland also shows that Zeeland became substantially wetter fairly soon after 3500 BC – so there is a good chance that the farmers of Baarland soon threw in the towel as well.

Whereas so many traces from the Stone Age have been found in Zeeland, only a few have been found from the Bronze Age (2000 to 800 BC). It was a large coastal bogland and consequently, it would not have been easy to live here. Despite this, a few discoveries have been made. Most of these come from the dune area, where people were able to live somewhat drier and safer. One of the most extraordinary finds is a bronze spearhead from the dunes near Haamstede. Another remarkable finding, the pot shards from the Meester Van der Heijden quarry in Nieuw-Namen. This was not a dune area, but it was relatively high and it bordered on an area in Flanders where traces of habitation have been found.

The skeleton of the ‛oldest woman’ of Zeeland in the grave of Serooskerke-Oranjezonsprink, circa 270 B.C.

The Iron Age (from 800 BC to the dawn of our era) has yielded many more finds, but remarkably enough, no iron artifacts are among them. Earthenware has been found, as well as (parts of) the foundations of dwellings. Even a farmstead with a farmyard was discovered north of Serooskerke on the island of Walcheren. This is also where the oldest known remains of a woman in Zeeland were found. Barley was also discovered in various places – agriculture was therefore already being carried out, albeit on a somewhat limited scale from small settlements. A discovery of a totally different kind was made in a ditch near Poortvliet This is where they found a kind of bracelet made of purplish, almost opaque and decorated glass. It creates quite a few conundrums. Since it is too small for an arm and too big for a finger, its purpose is not entirely clear. Who knows, perhaps it was hung on a cord around the neck. What is clear is that it is an artifact from the La Tène culture – a prehistoric culture north of the Alps. Hence it was an import product and it also teaches us something about Tholen in the Iron Age. It was for the most part a coastal bogland, but there must have been some level of prosperity. Otherwise, this decorative item would never have found its way to the island.