The ‘bolus’ – Zeeland’s regional delicacy – has its roots in Spain and Portugal. Jews from these countries introduced the pastry to Zeeland at the end of the sixteenth century. It is still a popular treat here, but opinions on what exactly constitutes a good bolus vary widely, even in Zeeland.

As early as the end of the sixteenth century, wealthy Sephardic Jews began settling in Middelburg. They had fled from Spain and Portugal, where they had been persecuted by the new Catholic rulers. Rich Jewish families from the Iberian peninsula migrated to cities in northwestern Europe, such as Antwerp, Middelburg and Amsterdam. Naturally, they brought their food culture with them, including their dietary customs and religious calendar. At the same time, they were not insensitive to the eating habits of their new country. Sometimes they were forced to adapt because not all of their staple foods were available or because some ingredients were too expensive. 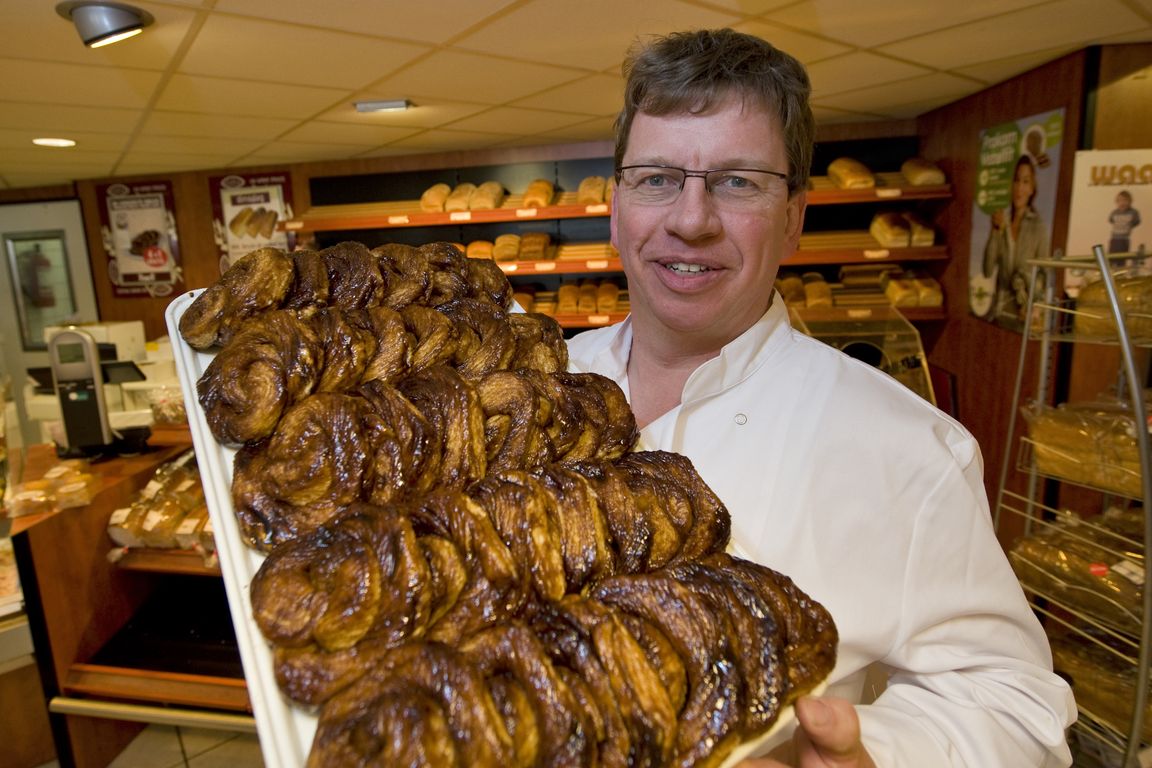 The bolus is known throughout the Netherlands as a typical Zeeland delicacy (Image bank Provincie Zeeland, beeldbank.zeeland.nl, photo Felice Buonadonna).

Among the dishes that the Portuguese Jews brought to the Republic was peshkado frito. This dish consists of fish fillets deep-fried in oil with a crispy crust. It was already being eaten by Jews in Spain and Portugal as far back as the thirteenth century. Deep-frying in oil was seen as something typically Jewish. Non-Jews fried in pork fat or butter. It appears that Portuguese Jews introduced this dish to the Republic upon their arrival and that we have our delicious ‘lekkerbekjes’ (deep-fried battered cod or whiting) and ‘kibbeling’ (deep-fried battered chunks of fish) to thank for that.

The same is true for a festive pastry that already existed in medieval Spain and Portugal in different variations. It was made of yeast dough with sultanas or sugarcane, which was either deep-fried or baked. Its name (bolus) is most likely derived from the Yiddish word bole (plural boles), which presumably stems from the Spanish-Portuguese bollo, meaning fine bread roll.

The pastry most likely made its way to Zeeland at the end of the sixteenth century, when Portuguese Jews settled in Middelburg. Later, the bolus also reached Amsterdam and other places in the Republic where Sephardic Jews settled. Two varieties of bolus were created in Amsterdam: one with almond paste (orgeadebolus) and one with ginger (gemberbolus). Recipes for these have been handed down from generation to generation. But the bolus also spread around the world during the Jewish diaspora. Boluses, for example, are also sold in New York (although there they are twice as big as the Zeeland ones), Jerusalem, Moscow, Paris and in the south of France.

The bolus remained popular in Zeeland, even after the Sephardic Jews had long since left. We do not know exactly when the delicacy began to spread from Middelburg to Zeeland. What is certain is that the sweet treat became the pre-eminent regional dish in Zeeland.

On Bevelanden and in some places on Schouwen, boluses are also called ‘jikkemienen’. The origin of this word is not known precisely. Jikkemiene is the Zeelandic form of the name Jacomina, but it is also the name for a bolus. On Noord-Beveland, Tholen, Schouwen-Duiveland and in parts of Zeeuws-Vlaanderen, the name ‘drol(le)’ for a bolus is in vogue, and this appellation – the shape – is immediately apparent when you are served a bolus. On Walcheren and a few other places in Zeeland, boluses are also known as ‘(stropie)draoiers’, and this has to do with the way they are prepared. Dialect speakers from Middelburg, Arnemuiden and Veere also refer to a ‘koekedraoiomme’. And what about the name ‘klevende liefde’ (sticky love), once submitted as the most beautiful term in the dialect competition? 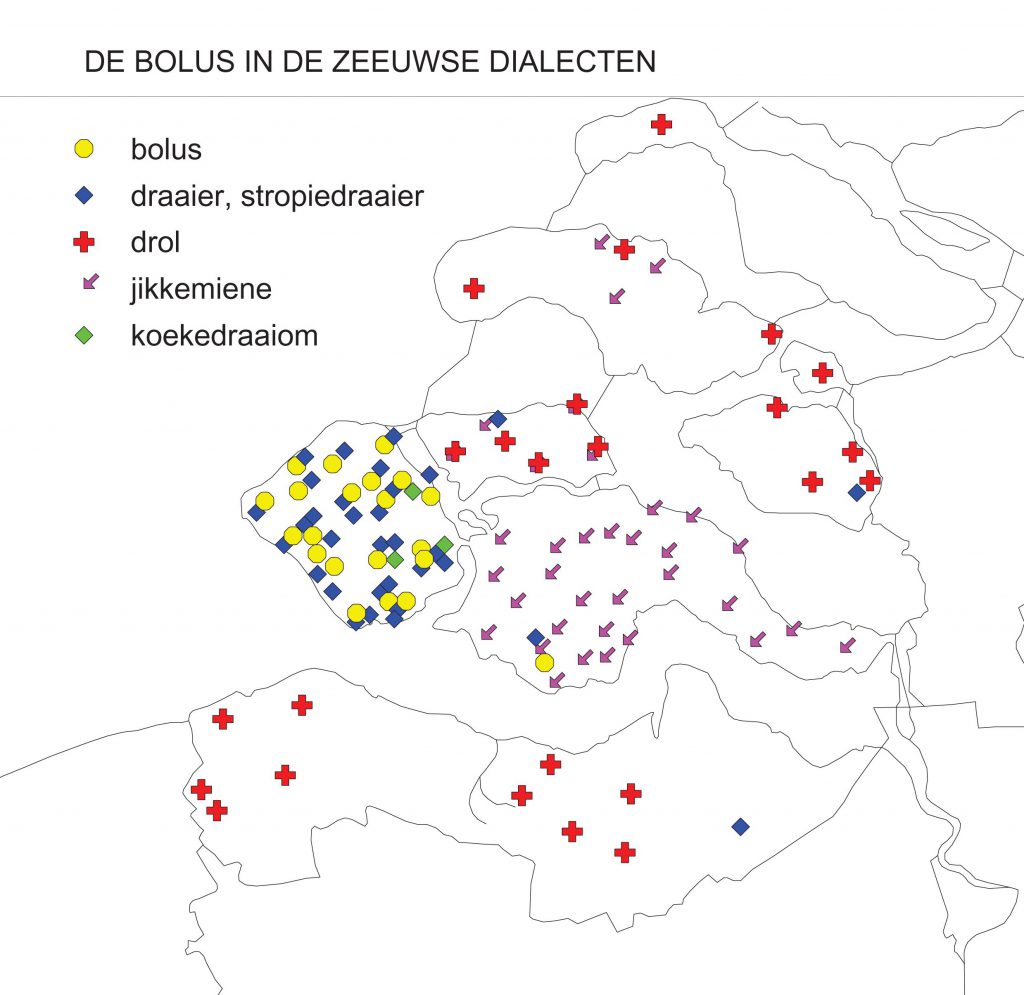 The spread of the names for bolus from Zeeland’s dialect based on data from the Woordenboek der Zeeuwse Dialecten (‘Dictionary of Zeeland Dialects’, Erfgoed Zeeland/Linguistics research group, Dutch language department (Ghent University).

The secret of the Zeeland bolus

Boluses are made from a luxurious bread dough. The bread dough is twisted into inch-thick strands of about 40 centimetres. The strands are then rolled through a mixture of soft brown sugar, caster sugar and cinnamon and then rolled up into a spiral. When the boluses are baking in the oven, the sugar melts into a kind of syrup. The sugary syrup forms around the strands of the bolus and makes it sticky on both the inside and outside. The trick for the bolus baker is to take the bolus out of the oven at exactly the right moment. If they wait too long, the bolus will have become too hard, but if the baker waits too long, the bolus will not be cooked through.

Local opinions differ as to what constitutes a good bolus. The differences lie mainly in the composition of the sugar mixture. The Zeeland Bolus Baking Championships have been held since 1998, organised by the Zeeland division of the Nederlandse Brood- en Banketbakkers Ondernemers Vereniging (the Dutch Bread and Pastry Traders Association, NBOV). And in 2015, the traditional bakers in Zeeland introduced the Zeeland Bolus Day (30 May).

Boluses are served with coffee and are also sometimes part of an elaborate festive meal. The underside of the bolus, which is somewhat flatter, is traditionally spread with (creamed) butter.