The ‘straô’ is an annual tradition on Schouwen-Duiveland. During the straô, riders and their decorated horses ride in a procession to the beach. The procession is preceded by the local marching band. Once on the beach, the riders lead their horses into the surf. A salt sea bath like this was a good way to clean germs off the horses’ legs and hooves after a winter’s rest in the stables. The straô is still celebrated as a festival in the villages.

In the old days, the riders used to sit on a small rug on the unsaddled horses. They wore white trousers, high-topped black shoes and a cap on their heads. These dress codes are nowadays somewhat watered down, but there are attempts to revive them. The riders with the most straô experience led the procession. They blew on copper horns. The horses were decorated with bows, twigs of greenery and paper roses. These were attached to the horse’s head, chest and tail. The decoration of the horses is still important today. A jury evaluates the participants and a prize is awarded for the most beautiful combination.

After the ritual bath, the procession returns to the village. There, they used to ride around the church twice (according to tradition, to the left). Afterwards, the riders would go to the local inn for a drink. In the nineteenth century, ‘schrôôsels’ (thin flat spiced biscuits), ‘appelsienen’ (oranges) and ‘frikkedillen’ (candied dates) were sold in outdoor stalls. All kinds of festivities still take place in the villages to this day. Ring riding (on horseback or on a bicycle) has become a permanent part of the festival.

The straô is a living tradition on Schouwen. It used to be a custom of farmers, farmers’ sons and farmhands. Around 1960, women rode in the straô for the first time. Nowadays, recreational horses are used in addition to farm horses and the riders are no longer all from their own village. People from elsewhere can also sign up. 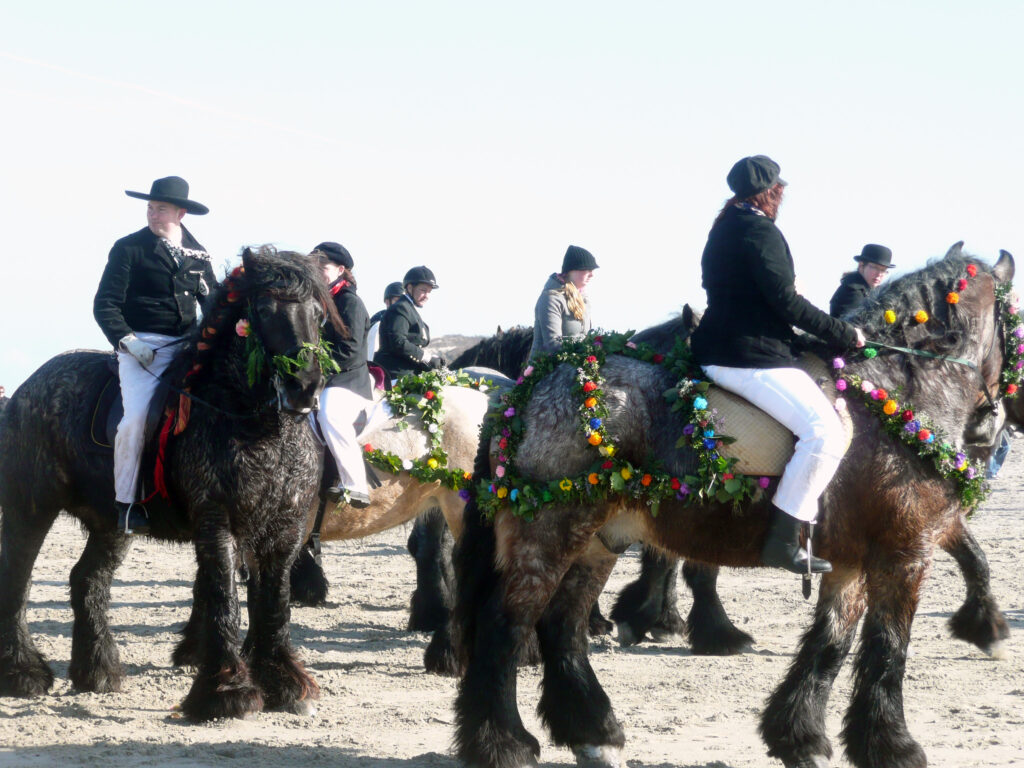 The return of the traditional white trousers (Erfgoed Zeeland).

The first straô is traditionally held eight weeks before Easter in Renesse. On the Saturdays that follow, a straô is held in Haamstede, Noordwelle, Ellemeet, Scharendijke and Serooskerke respectively. The straô in Serooskerke is always the last one of the season.

In Renesse, the local minister added a special touch to the straô by washing his own feet in the sea. Members of his congregation followed his example and since then they also go into the water with their trouser legs turned up.

The origin of the straô

Several stories abound about the origin of the straô. Farmers are said to have wanted to protect their animals from evil spirits by bathing in the sea. It was also thought that the straô was a remnant of the worship of a local god.

The first mention of the straô dates back to 1643. At that time, the pastor of Elkerzee, pastor Johannes Stamperius, complained in a meeting of the Schouwen-Duiveland classis about the desecration of the Sunday before Lent. On that day, horses and their riders came from all over the island to Elkerzee. However, seventeenth century pastors and church councils did not mind the straô very much. They did not regard it as a pagan ritual. The straô has stood the test of time and is now a popular tradition, one that also attracts many spectators every year.

Watch a video with historical and contemporary footage of the straô.