There has almost always been water in Zeeland. If you wanted to get somewhere, you had to cross over it to get there. At first, this was done in a somewhat primitive manner, but Zeeland eventually grew into a province full of innovative shipbuilders and brought forth ships that could be used to conquer the world’s seas. 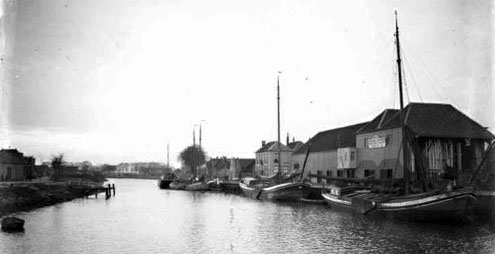 The Scheepstimmerdijk (left) and Vissersdijk (right) in Zierikzee in a photo taken around 1915 (Image bank Gemeentearchief Schouwen-Duiveland). On the left the site of De Goede Intentie, and on the right, the Commerciewerf, located behind the warehouses of the Zierikzeesche Houthandel.

The first Zeeland boats were probably tree-trunk canoes. No examples of these have been found in Zeeland to date, but examples dating from the Iron Age have been found just outside the provincial borders. And you could move around quite comfortably in them. They even had benches fitted into them.

Zeeland is indebted to the Romans and the Vikings for the first major innovations in shipbuilding. In Roman times, important ports were located here for the crossing to England. Their ships were therefore definitely seaworthy. And the Vikings came to Zeeland by sea. Therefore, they too were gifted shipbuilders. Both the ships of the Romans and the Vikings had hulls made of wooden planks. Zeelanders adopted a number of their building techniques, but for a long time, shipbuilding was still somewhat underdeveloped here.

Trade became increasingly more important in the eleventh century and many towns in Zeeland flourished. In order to sustain their extensive trading network, the towns needed ships, and because the demand for ships was on the rise, the building of ships became a speciality and a shipbuilder was a profession that you could specialise yourself in. As builders shifted their focus to this business sector, they also began to innovate. New types of ships were developed to meet new needs. In the fifteenth century, for example, the herring barge was invented, which provided a great deal of storage space. This made it possible to sail far further and catch a lot more fish. This in turn led to greater prosperity in Zeeland.

Most of the fishing boats built by the shipbuilders were flat-bottomed boats. They worked best in Zeeland’s tide ports. One of the most well-known types of flat-bottomed boat is the Hoogaars. Of course, these sailing ships are no longer used for fishing, but quite a few of them have been preserved thanks to the preservation foundation Stichting Behoud Hoogaars. At the Arnemuiden Shipyard, you can see how these historic ships are being restored. Apart from that, you can see them in action every year at the end of July during the Van Loon Hardzeildagen (Van Loon Fast Sailing Days) on the Veerse Lake – especially from the vantage point of Veere, where you have a good view of the race and where you can also enjoy all kinds of entertainment (shanty choirs and good food). 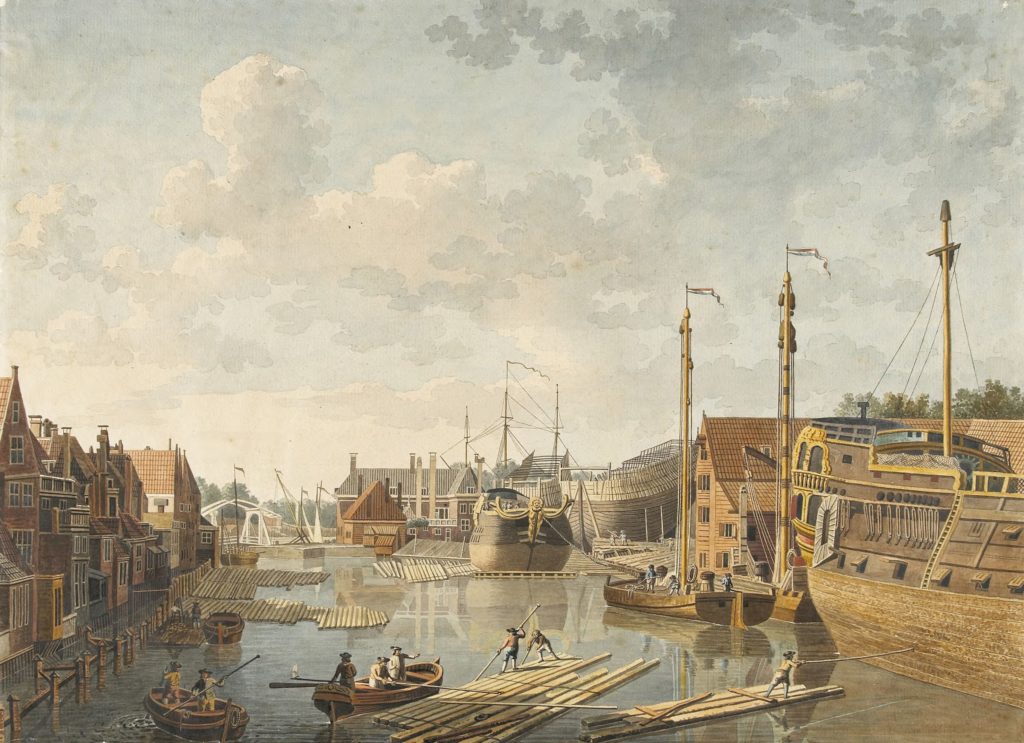 VOC shipyard in Middelburg, painting by Jan Arends from 1778 ( Zeeland Archives, KZGW, Zelandia Illustrata). Wood laid in the water, destined for a ship under construction. In the background, the house of the chief boatswain. On the left, the rear of the houses on the Kinderdijk.

In later centuries, too, there was a close connection between economic trends and shipbuilding. After the Middle Ages, the economy kept on growing and trade networks expanded exponentially. And consequently, so did shipbuilding. Trading companies and the Admiralty set up large-scale shipyards and dominated the waters for a very long time. These shipyards introduced new and different techniques and they operated on an immense scale. At the VOC shipyard in Middelburg, a total of 336 East Indian sailing ships were built. These were large ships. Usually they were triple-masters measuring around forty to sixty metres in length. The shipyard was located in the Maisbaai area of Middelburg, where nowadays you can see small yachts bobbing around. Names such as Oude Werfstraat and Dokstraat still recall the time when there was a shipyard here. If you want to gain an impression of how special the ships were in those days, you can visit the Zeeland Maritime MuZEEum in Vlissingen, where the stories of entre shipping history of Zeeland come to life.

Not every town was flourishing. In the fourteenth century, Zierikzee was the town with the largest number of ships on the deep sea routes. When the Western Scheldt became more important, the town lost its significance. Today, Zierikzee is certainly not the largest town in Zeeland, but you can still see from the large monumental buildings and the layout of the old city centre what a powerful and wealthy town it must have been. Museumhaven Zeeland is located in the port area. Here, you are allowed to step aboard the finest examples of Zeeland’s sailing heritage.

After the VOC was wound up, Zeeland lost the leading position it had in the field of shipbuilding. There were still several shipyards, but it was not until the time of the construction of motorised ships that another company of such impressive stature surfaced: Koninklijke Maatschappij De Schelde (Royal Schelde Group) in Vlissingen. De Schelde built all types and sizes of ships for both the navy and the merchant marine: torpedo boats, frigates, submarines, ferries, coastal vessels and large passenger ships. The company dominated the town for many years. Literally. Whenever work was being carried out on a new ship, it towered above the houses, just like the gigantic cranes used in construction. 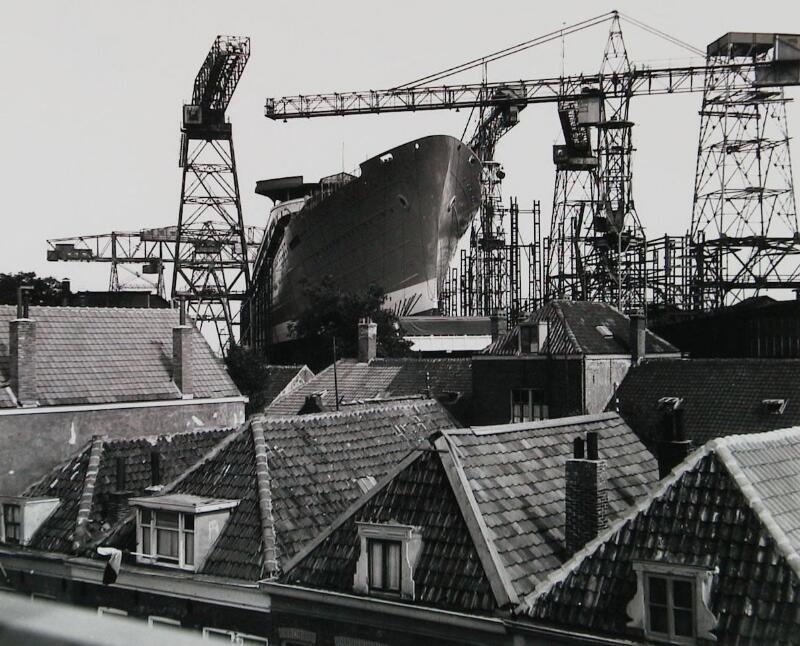 The ship Willem Ruys under construction, spring 1946 (ZB, Image bank Zeeland). Until 1958, the Willem Ruys sailed a regular service to Indonesia. After being converted into a cruise ship named Achille Lauro, the ship became known due to a hijacking that took place in 1985. It sank off the coast of Somalia in 1994.

Since then, the shipyard has moved a little further out of the town centre and has been taken over by Damen/Amels. Nowadays, specialist work is carried out there. Superyachts are refurbished and/or fitted out. In this respect, Zeeland is once again leading the way. You can always see a few of these impressive ships from Koningsweg. A residential area is being built on the old site of the Scheldt. The pride of Vlissingen, the Schelde Kraan (crane), stands there proudly. There is also a wonderful piece of industrial heritage in the form of former workshops, such as the Zware Plaatwerkerij (heavy sheet metal workshop, now a residential complex for the elderly) and the Timmerfabriek (carpentry workshop, a residential hotel). The old Verbandkamer (the former first aid post) is home to Museum Scheldewerf. Here, you can learn everything about the illustrious history of the Schelde shipyard.