Zeeland has its own popular sport: ring riding. Lots of competitions are still being held, especially on Walcheren, and the public can watch as the riders try to put rings on a lance, just as they did hundreds of years ago. And all that while on the back of a galloping horse. 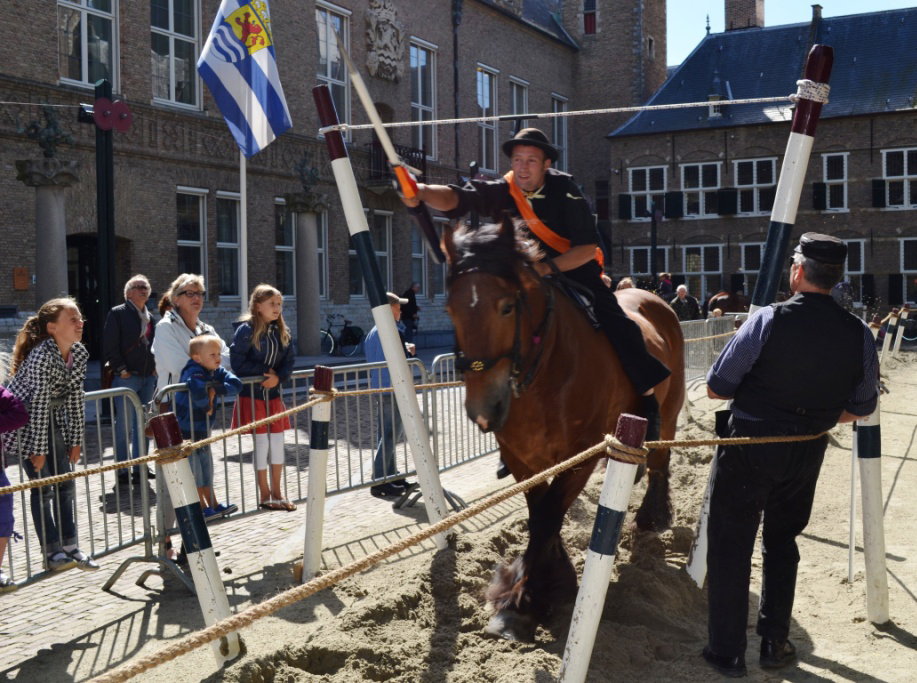 Demonstration match on the Abdijplein in Middelburg, 2012 (Erfgoed Zeeland).

Ring riding may have originated in the Middle Ages. The sport could well have its origins in the tournaments of the nobility, in which a lance had to be stuck through the ring of a damsel. There are also theories about a Germanic origin. There is no evidence for this, but it would explain why ring riding is traditionally practised in many places during Pentecost, which more or less coincides with the Germanic celebration of May.

Ring riding is mainly practised on Walcheren, but there are a few places on Zuid-Beveland where matches are also held. All ring riders compete at local level, and if they are good enough, they can also compete as a team for their own village. Sometimes, ring riders also compete on other islands, but these are mainly demonstration competitions.

For a long time, ring riding was mainly an unorganised fairground event for farmers’ sons and farmhands. In 1950, the Zeeuwse Ringrijders Vereniging (Zeeland Ring Riders Association) was founded and the sport became more structured. They agreed on set measurements for the track and introduced different classes in which you could compete as a village with a team of three.

How does ring riding work in practice?

Riders gallop on an unsaddled horse over the ring track. They try to stick their lance through a ring as they charge down the track. The ring is hung halfway down the track and has a diameter of 38 millimetres. When all the riders succeed in sticking their lance through the ring, the ring is then made smaller, down to 32, 26, 20, 14 millimetres and eventually even down to 10 millimetres. They keep on going until there is only one rider left who manages to stick their lance through the ring. If someone does not manage to hit the mark within the first eight rounds, then the ‘hoepel’ (a hoop, a large-sized ring) is specially brought out for them. Besides the competition rules, there are also dress codes. All competitors wear white clothing with an orange sash. During demonstration matches and on folklore days, they also sometimes wear traditional costumes.

In addition to the rules, all sorts of traditions are also attached to ring riding. The orange that is used in the dress code is associated with the close relationship with the House of Orange. Several members of the royal family have bestowed prizes on ring riders. Challenge trophies for the Zeeland Championship have been awarded by Queen Wilhelmina as well as Juliana and Beatrix.

Another tradition concerns the decoration of the horses. A prize is awarded for this as well at many village competitions. Tails are braided and ribbons, pumpkins, bows and flowers are used to decorate the tail and mane.

One of the most spectacular traditions is ‘jonassen.’ The champions (but sometimes also the winners of the hundredth rings) are tossed up into the air. The participants throw the winner up in the air three times. Lighter riders in particular are thrown frighteningly high up into the air. 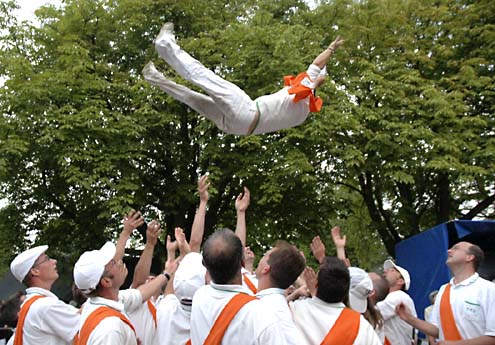 ‘Sjezenrijden’ is very similar to ring riding. This is another sport that is mainly practised on Walcheren and also involves sticking a lance through a ring. The main difference is that the participants do not sit on a horse, but a couple sit in a ‘sjees’ (a two-wheeled buggy pulled by a horse). The man guides the horse and the woman tries to stick a lance through the ring. Both are wearing traditional Sunday dress. Just as with the ring riding, it is important to look your best. The buggies must be decorated with flowers (and artificial flowers are absolutely out of the question). 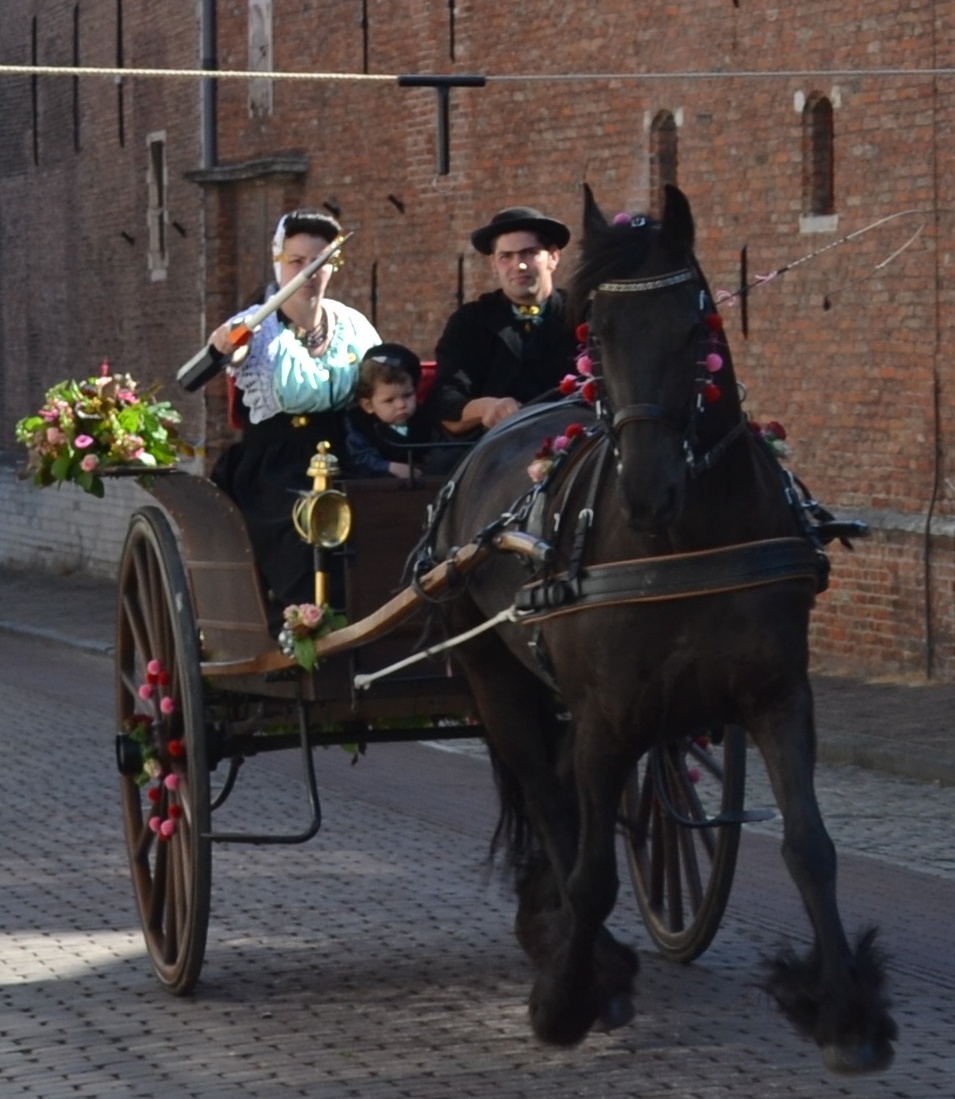 Due to the mechanisation of agriculture in the 1950s, it briefly seemed that ring riding was on the way out. The number of draught horses in Zeeland declined considerably as a result, which made it impossible for many competitors to take part. But at the same time, women’s emancipation was gathering momentum. Many of them were hobby riders and when they also started participating, this saved the sport. At the same time, it means that you don’t see only ‘boerenknollen’ (colloquial term for huge farm horses) or draught horses on the ring track anymore. People also compete on lighter horse nowadays.

Ring riding is still popular. It is both a fun folklore spectacle and a sport that is practised fanatically. At the village competitions, as in the old days, sometimes a bit too much beer might be consumed. But as soon as the Zeeland Championships (the third Thursday in August in Middelburg) or competitions in one of the various classes are held, the majority of the competitors became so serious… that a church council would not have to lodge a complaint about it any time soon. Would you like to watch a competition? The ZRV has a competition calendar on their site.