Throughout the centuries, Zeeland has regularly served as a place of refuge for large groups of migrants. They have all left their traces here and helped to shape Zeeland. Without their input, Zeeland would not be what it is today and the famous Zeeuwse bolus wouldn’t even exist.

Migration from the Southern Netherlands

From the sixteenth century onwards, there was a continuous influx from the Southern Netherlands and from France. Many merchants and artisans settled in Zeeland because they could practise their Protestant faith freely here. They were quickly absorbed into the trade network that was established here the knowledge that they brought with them greatly benefited Zeeland. The prosperity of the Golden Age, which was tremendously lucrative, certainly in Middelburg, was for an important part due to their talents and capital. At the same time, their arrival also inevitably caused unrest. For example, so many refugees came to Vlissingen that the original Roman Catholic residents no longer felt at home there and they in turn emigrated southwards – nota bene to the areas that had been abandoned by the newcomers.

The family of Pierre de Moucheron and wife, parents of Balthasar de Moucheron, a merchant from Antwerp who moved to Middelburg in 1585. Anonymous painter, 1563 (Rijksmuseum Amsterdam).

Groups of Portuguese (or Sephardic) Jews also came to Zeeland over the course of the 16th century. They fled centuries of persecution and established a relatively inconspicuous existence in the Netherlands. In Middelburg, they had a private synagogue and their own cemetery just outside the town walls. This is still there on the Jodengang. It is one of only two exclusively Sephardic Jewish cemeteries in the Netherlands. Some of the graves here are 350 years old. A lasting, sweet reminder of the Jewish immigrants is the bolus. They brought the bole (fine pastry) to Zeeland, which is probably where the famous Zeeuwse bolus came from. 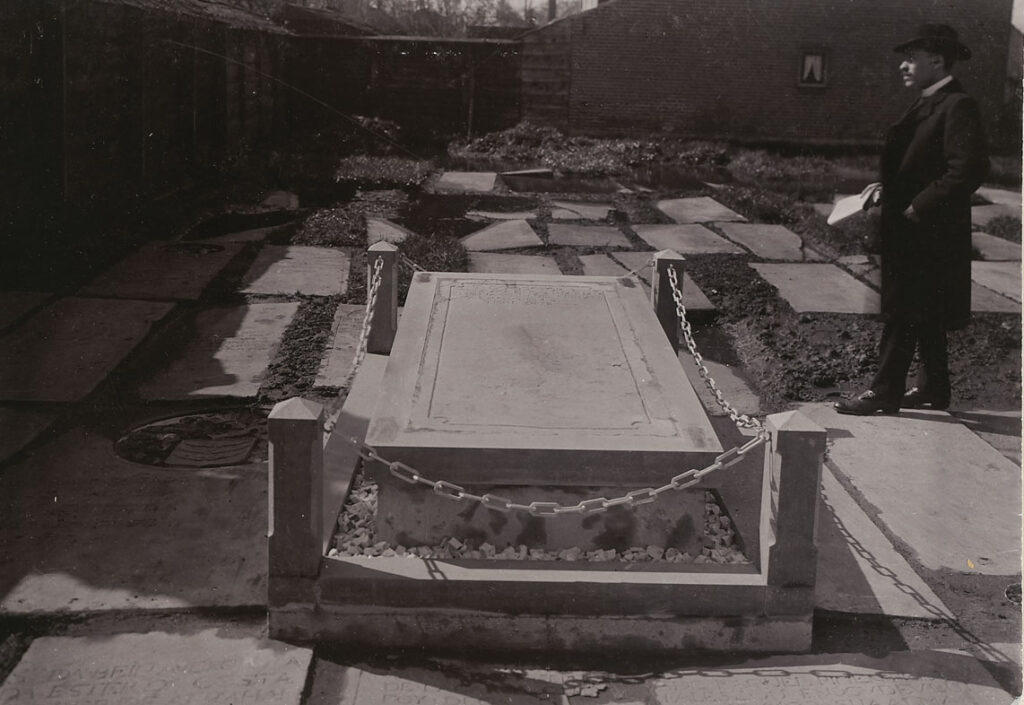 Grave at the cemetery of the Portuguese Jews in the Jodengang (Jews’ Corridor) at Middelburg, photo taken in 1912 (Zeeuws Archief, HTAM).

Over a period of about 150 years in the seventeenth and eighteenth centuries, French Huguenots came to Zeeland. These Protestants left France because the freedom of religion had been abolished there. They first settled in Groede and Sint Anna ter Muiden, and later also in other places in Zeeland. They mainly left their mark linguistically. Thanks to the Huguenots, Zeeland still contains quite a few words borrowed from French, and in many Zeelandic family names a French origin is also recognisable, such as Le Clercq, Oreel and Triou.

The Huguenots were not the only ones to flee their country for religious reasons in that period. In the first half of the eighteenth century, two groups of Protestants from Salzburg settled in Zeeland. The small group of Lutheran Protestants on Walcheren had been selected and soon adapted. The eight hundred or so Salzburgers who arrived in the Land van Cadzand a year later had a tougher time. Their history prior to their arrival was also different. The impression that they had been given about living and working in Zeelandic Flanders was not half as appealing as the reality. When the Zeeland fever set in, many Salzburgers left Zeelandic Flanders again. The remaining Salzburgers founded a Lutheran church. No services are held there nowadays, but Het Vlaemsche Erfgoed in Groede makes sure that the church is open to visitors from time to time, and you can also visit it on one of their guided tours. 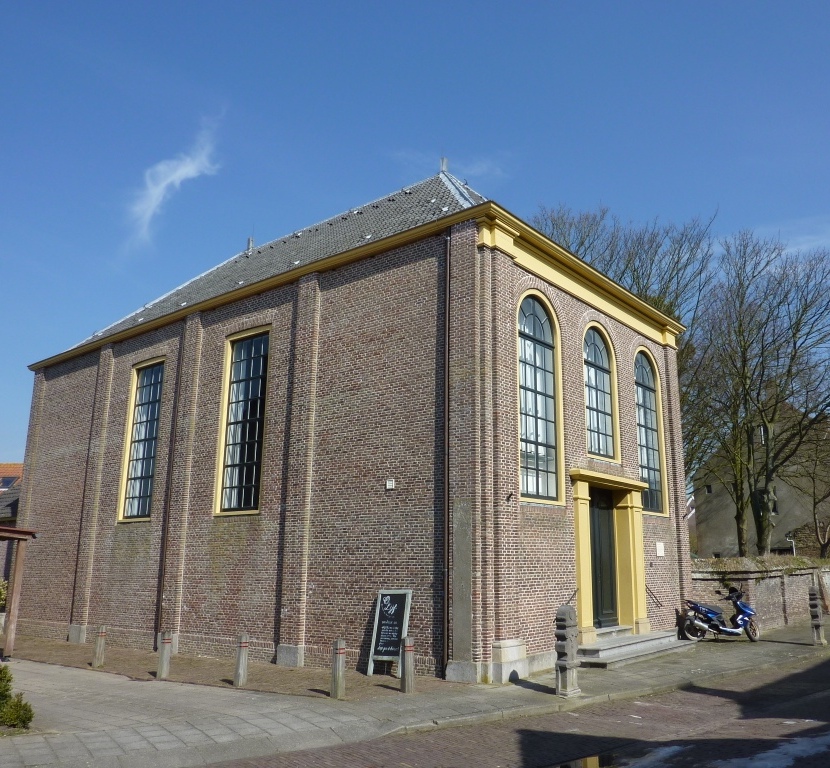 The last active Lutheran congregation in Zeeland still holds services in Zierikzee. There is a tiny church on the Gat van West Noord Westen housed in a beautiful historic building that features two swans (the symbol of the Lutheran faith) on the roof.

The Lutherans may have also introduced sweets to Zeeland. We have them or the Huguenots to thank for the Groese paptaart. You can buy this sweet delicacy at the bakery in the Slijkstraatje in Groede.

In the 1950s, many Moluccans and their families came to Zeeland. As they had fought on the Dutch side as soldiers, they were no longer safe in Indonesia. They ended up being housed in camps. These were spread across Walcheren, Schouwen, Zeeuws-Vlaanderen and Zuid-Beveland. The Netherlands did not keep its promises to the Moluccans, sacked the soldiers, withdrew financial support and eventually demanded that the Moluccans hand over 60 per cent of their income to pay for their housing. This heightened the tension and the mood became grimmer. At the Westkapelle camp, this culminated in a confrontation between camp residents and the police. The police fired shots and nine people were wounded. In 2011, a monument was erected on the Westkapelle dike, adjacent to the former camp. For an impression of what life was like back then, you can also watch this short video clip from the Zeeland canon, in which a former camp resident talks about his time in Westkapelle. 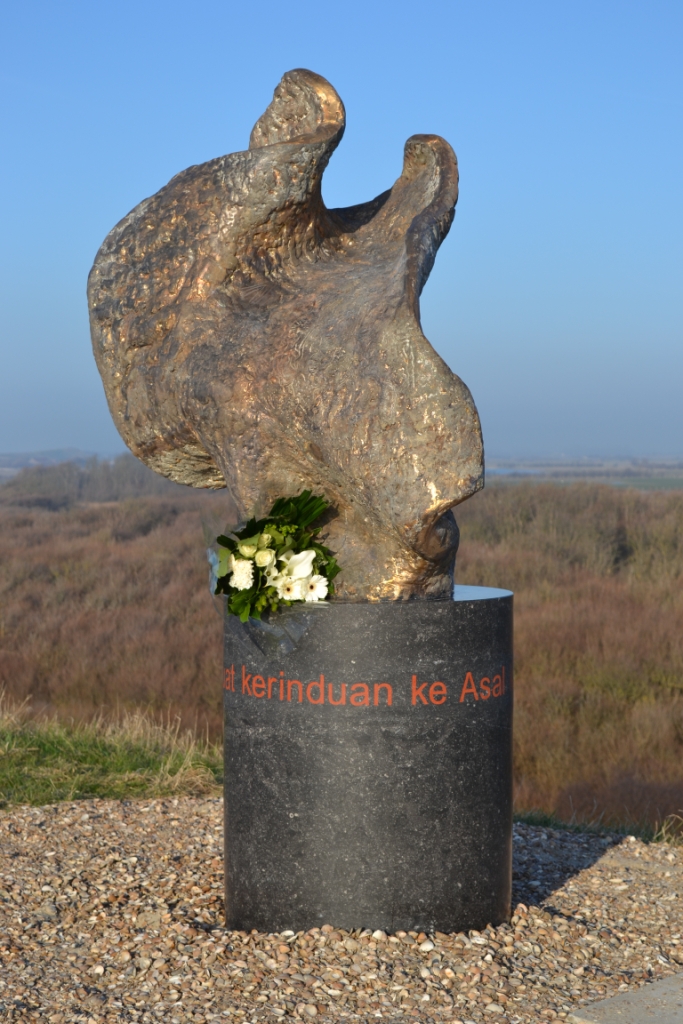 The monument on the dike at Westkapelle (Erfgoed Zeeland).

When the Moluccans eventually left the camps, they settled in various places in Zeeland. Nowadays, Middelburg and Oost-Souburg in particular have a large and close-knit Moluccan community. Moluccan culture is still celebrated in small-scale, pasar malams and the province counts several good Indonesian caterers and restaurants.

After the Moluccans, several other larger groups of migrants arrived in the 20th century. In the 1960s and 1970s, Turkish and Moroccan guest labourers arrived. If you want to get a taste of Turkish culture, you can do that, for example, at the annual Kermes (around the second weekend in June) at the Middelburg mosque. It’s open house, snacks are for sale and there is music. In the 1970s, Suriname became independent and many Surinamese came to the Netherlands, and to some extent to Zeeland as well.

At the end of the 20th and the beginning of the 21st century, new migration flows emerged due to the many different sources of conflict in the world. Refugees came from the Balkan countries and from all over Africa and Asia. A lot of refugees came from Syria too. Zeeland has offered shelter to refugees for centuries and now the province was called upon to help once again. Zeeland’s past demonstrates that the arrival of new residents can enrich the fabric of society. The future will reveal whether Zeeland has done enough to foster and benefit from this new workforce, their drive to survive and their inventiveness – something that the province with this influx of refugees practically received as a gift, so to speak.