In 2020, local residents managed to stop the bright red colour of the spiral-shaped strip on the Nieuw-Haamstede lighthouse from being changed. A sign that these lighthouses remain close to the hearts of the people of Zeeland. There are still eight working ‘classic’ lighthouses along the coast of Zeeland, as well as a few that are out of action. Some form a ‘line of lights’ with another tower (high and low), many are national monuments. In addition, numerous coastal lights and light stations, for example at canal openings and harbour piers, are in operation to ensure the safety of maritime shipping.

The term ‘coastal lighting’ is used both independently and for the light in a lighthouse. Light stations have more of a pole-like character. The history of this common practice goes back to ancient times. Modern lighthouses with rotating lights, lenses and mirrors have been around since the nineteenth century. They were preceded by ‘kapen’ (identification structures without any kind of fire) and ‘vuurboeten’ or fire beacons with open fires. We see these on old maps and archaeological traces still exist, such as those at Saeftinghe. 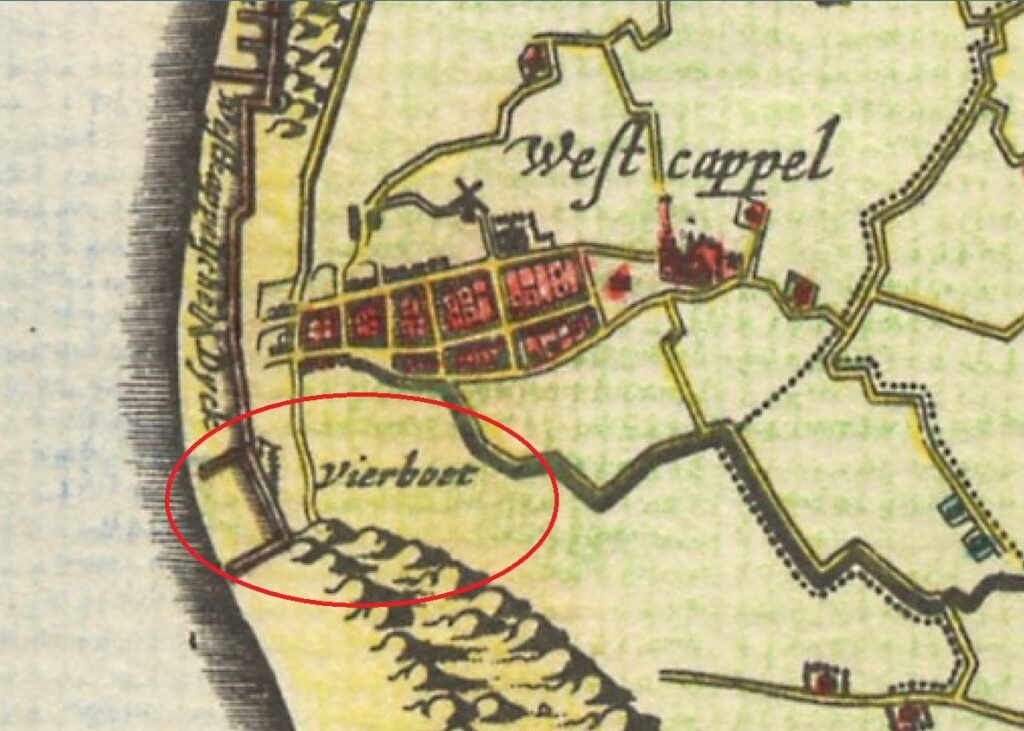 The former fifteenth-century church steeple at Westkapelle had already been converted into a modern lighthouse back in 1817/1818, with fifteen ‘Argand lamps’ (oil lamps) and ‘just as many copper, silver-plated, parabolic light reflectors’. After lightning struck and there was a fire in 1831, the first renovations were carried out. The 52.3 metre high tower, which is open to the public, forms a line of light together with ’t Hoge Licht and ’t Lage Licht (Noorderhoofd) on the Zeedijk in Westkapelle, a round, cast-iron tower (11.5 metres) dating from 1875/1876. Both are accessible to the public. 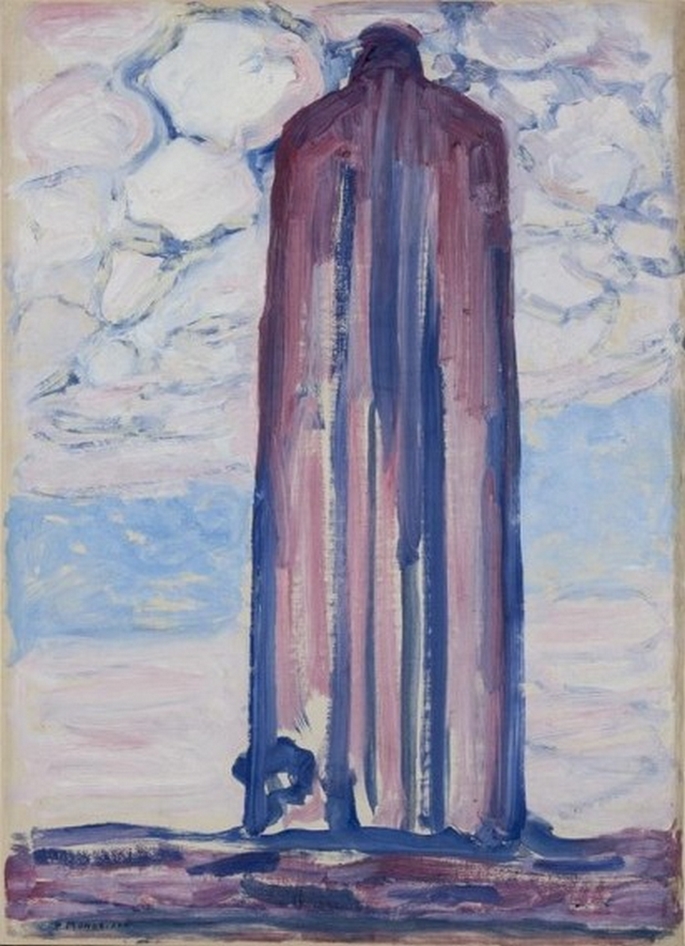 Lighthouse at Westkapelle, painting by Piet Mondrian, 1908 (Kunstmuseum The Hague).

In 1891, a pentagonal lighthouse was built on the Keizersbolwerk in Vlissingen which comprised a cast-iron palisade (the ‘chair’) with a lighthouse house on top (10.6 metres). It served as a harbour light and as a sector light (only visible from a certain angle). The Belgian pilotage service used it as an lookout post. The characteristic, bright red tower was rebuilt as a replica in 1989/1990, with the chair made out of iron plating. At Nollehoofd in Vlissingen, there is a large steel navigation beacon (6.1 metres in height, sector light).

In 1950/1951, they built three square brick lighthouses with pyramid roofs in the dunes between Westkapelle and Vlissingen: the ‘Sergeant’ in Zoutelande (Westkapelseweg, 12.8 metres) and Kaapduinen Hoge Licht and Lage Licht (12.6 and 13.8 metres respectively), which together form a line of lights. They both feature striking red and yellow stripes, while the Sergeant is brick-brown.

The sinking of four ships off the coast of Schouwen in the winter of 1831/1832 led to two fire beacons in the dunes being replaced by a lighthouse with a rotating light near the later hamlet of Nieuw-Haamstede. It was not until 1837-1840 that this round, brick Wester-Schouwen lighthouse (50 metres in height) was built with three staff houses. The red and white spiral-shaped paintwork added in 1935 was intended to prevent aeroplane collisions after the construction of Haamstede airfield (1932). 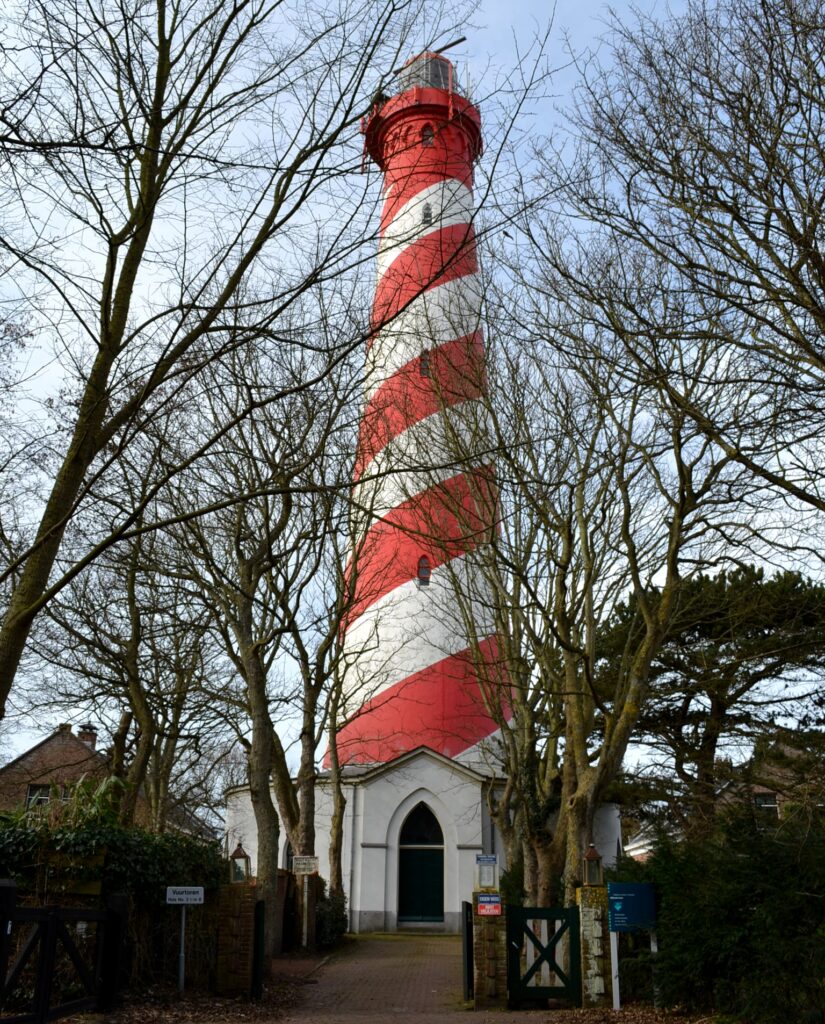 In the period 1856-1916, there were three lighthouses elsewhere on Schouwen: an octagonal cast-iron one in Renesse (Noord-Schouwen Laag), which formed a line of lights with Noord-Schouwen Hoog in Noordwelle. Both were demolished in 1915/1916: two replacement iron light towers disappeared in 1932. The facade stone of the tower of Noordwelle was preserved and erected on the Dorpsring. A 3.8-metre high, concrete and brick tower on Verklikkerpad (Burgh-Haamstede, 1949) was put out of action in 1996. 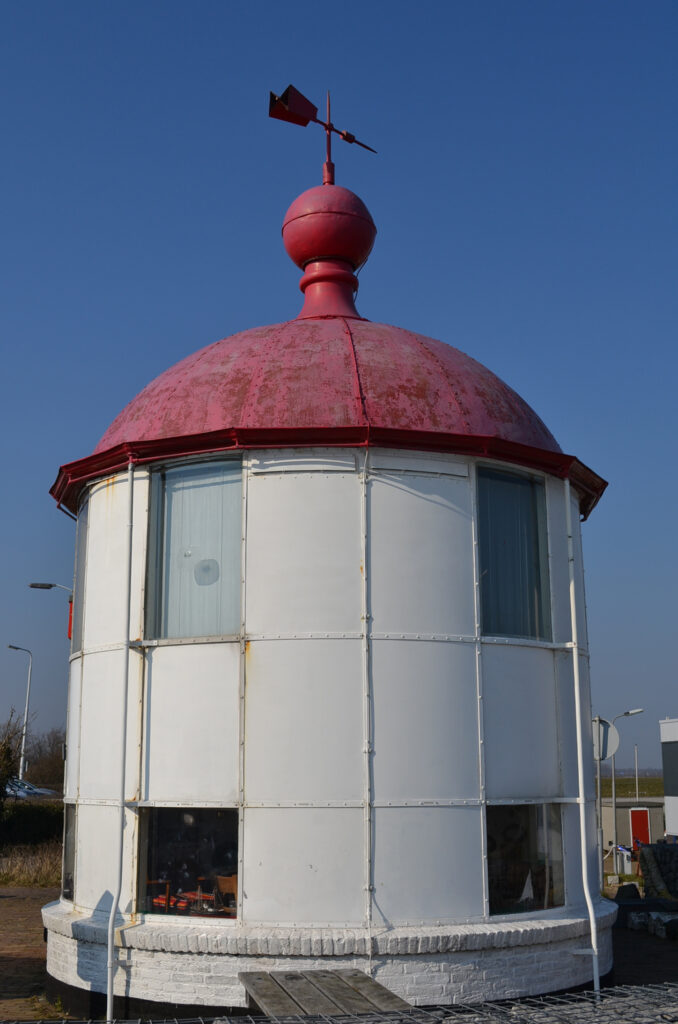 The octagonal cast-iron lighthouse in Breskens on the sea dike near Nieuwe Sluis (1867, 22.4 metres) was designed by the architect Quirinus Harder, just like ‘t Lage Licht near Westkapelle and eight other Dutch lighthouses that still exist. It is the oldest iron lighthouse in the Netherlands that is still operational. It has distinctive black and white paintwork and is open to the public. It formed a line of lights with the Lage Licht dating from 1906 (11.2 metres, put out circa 1940), which was relocated to Spuiplein in Breskens in 1978. The Kruishoofd light on the Zeeweg in Groede (1922) was put out in 2011.

Terneuzen has had a round steel lighthouse (10.2 metres) on the Scheldeboulevard since 1992, which functions as a sector light. The iconic water tower of Terneuzen, which was demolished in 2000, also used to be a lighthouse. A steel navigation beacon measuring 14.6 metres in height can be found on Nieuw Neuzenweg (Hoek).

On the pier of Hoedekenskerke, harbour, on the Nieuwe Veerweg, there is a remarkable brick, square beacon (sector light) measuring 4.6 metres, dating from 1914. The hexagonal, cast-iron beacon on Tramperweg in Hansweert (8 metres) also dates from 1914. It is made up of a chair with a lighthouse and was extinguished in 1992. A lighthouse beacon at Bijzelingsche Ham, which was extinguished around 1995, came into private hands and was moved to Bergen op Zoom.

The case of the Terneuzen water tower is not an exceptional one; we can also find ‘unusual’ lighthouses elsewhere in Zeeland. The chimney of the Stoomgemaal Oosterschelde (steam pump station) near Poortvliet, dating from around 1910, also functioned as coastal lighting until 1986, as did the late mediaeval Campveerse Toren in Veere up until 1924. A navigation beacon (sector light) has stood on the nearby harbour pier since that time.

The dome-like office of the harbour master on the harbour platform in Burghsluis is the former skylight of the Nieuw-Haamstede lighthouse (1882-1981). A little further east, the fifteenth-century Plompe Toren of the drowned village of Koudekerke served as a ‘dagmerk’ (beacon without a flame). Of the lightships stationed in the waters of Zeeland, only the hull of Lightship 9 (1933, recalled in 1978), moored in Walsoorden, survived within the province.