The Kanaalzone (canal zone) near Sas van Gent has always been a region full of enterprise, industry and innovation. The location has something opportunistic about it (in the positive sense of the word). They have always known how to cater to the demands of the day. Sas van Gent has had this ability from the very moment the place came into being. In a location convenient for the transfer of goods on the way to Ghent, a place brimming with go-getters and enterprise sprang up, and that became Sas van Gent. When, at the beginning of the nineteenth century, the Canal from Ghent to Terneuzen was built, the Kanaalzone became an ideal location for French and Belgian factories. Connections were good and relatively cheap Belgian labourers also lived nearby. The region came to life. Initially, this mainly revolved around the food industry, but heavy industry soon followed. Some of those factories have now disappeared, but they have not been abandoned. Innovation and top-class production can still be found here.

Walzenmolen flour mill The Walzenmolen flour mill was one of the first large industrial ventures in Sas van Gent. Early in the nineteenth century, Dominicus Verschaffel, a native of Belgium, built a stone mill on the ramparts of the town. He was soon granted permission to install a steam engine to turn the mill stones. It was not long before he installed more of these machines. His son Johannes had a brand new flour mill built on the Oude Vesting (canal). It was the first large factory in the Zeeland-Flemish Kanaalzone. Towards the end of the nineteenth century, a switch was made to a new system with steel rollers. This called for a new building. The new flour mill on the Wilhelminalaan was called Walzenmolen. As early as the beginning of the twentieth century, people worked in shifts and the factory ran non-stop (except on Sundays). For decades, the factory did very well, but at the end of the twentieth century, it floundered and was even demolished in the end. Only the shell of the flour mill on the Bolwerk (which has been preserved) is a visible reminder of local flour production. 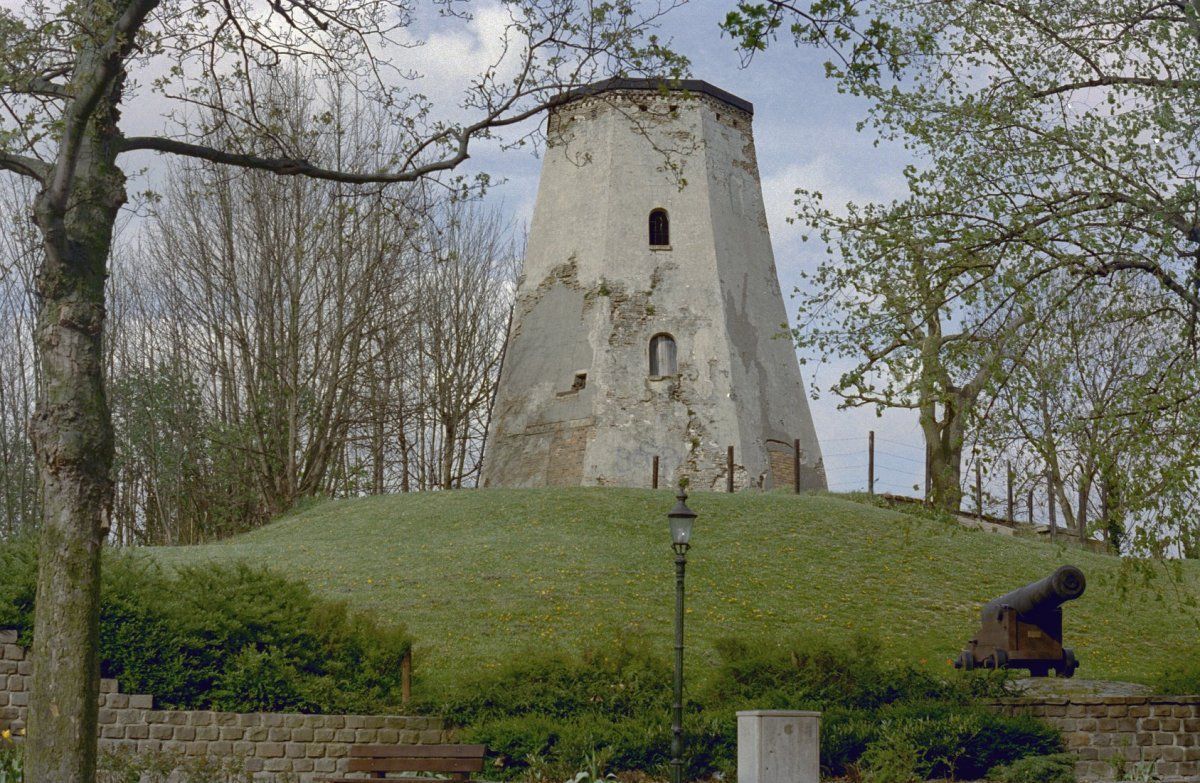 Remnants of the shell of the Verschaffel mill on the ramparts in Sas van Gent (Image bank Cultural Heritage Agency of The Netherlands, photo K.G. Rouwenhorst).

One of the most successful and iconic companies for the Kanaalzone was the glass factory in Sas van Gent. The factory was established in 1900 mainly with Belgian capital. The entrepreneurs chose Sas van Gent because of its location alongside the canal and the railway. This was made use of very actively. Glass was manufactured on the first floor, so that railway wagons could easily be loaded and unloaded. Another important factor was access to cheap labour – primarily from Belgium. The glass factory was an innovative one (it was the first mirror glass factory in the Netherlands). Later, the company specialised in the manufacture of safety glass and glass for facades. During its peak years, it employed hundreds of people. Prestigious and distinctive buildings at home and abroad were fitted with glass from Sas van Gent.

Early in the 20th century, business operations were expanded to include a phosphate factory. This still exists today (under the name Rosier). Annually, approximately 500,000 tonnes of artificial fertiliser is produced on a site right next to the former glass factory.

At the beginning of the 20th century, a factory was built to process agricultural products. This would grow into the NV Stijfsel- en Glucosefabriek ‘Sas van Gent’, (the Starch and Glucose Factory of Sas van Gent). Once more, Belgian capital was behind the start-up. From the very outset, the factory made starch, cattle feed and oil from maize. Several years later, glucose was also produced there. The Canal from Ghent to Terneuzen remained an important waterway. When it was widened, it meant that maize could be transported much more easily to Sas van Gent. That is without a doubt one of the reasons why the factory is still standing there today. These days, the factory, together with a branch in Bergen op Zoom, is part of the American Cargill and produces glucose, corn starch, alcohol and fibres, among other commodities.

The only two Zeeland sugar factories stood in Sas van Gent. This was because the water in so many other places in Zeeland contained too much salt for sugar production. The first factory (which eventually became NV Beetwortelsuikerfabriek Sas van Gent) was built at the end of the 19th century. It was a private initiative led by Belgian and Zeeland-Flemish investors. Relationships with the farmers who supplied the sugar beet to the factory were strained from the start. They founded a cooperative factory: the Eerste Nederlandsche Coöperatieve Beetwortelsuikerfabriek (ENCB). Competition (including international competition) made it necessary to scale up. This led to mergers and takeovers in the Dutch sugar industry. In the process, the smaller factories lost out. They could no longer produce in a profitable way. This marked the end of both factories at the end of the twentieth century. All that remains today is a number of sugar warehouses. The oldest of which dates back to 1921 and is now home to the Industrial Museum Zeeland. This is where you can find out all there is to know about Zeeland’s industrial heritage. 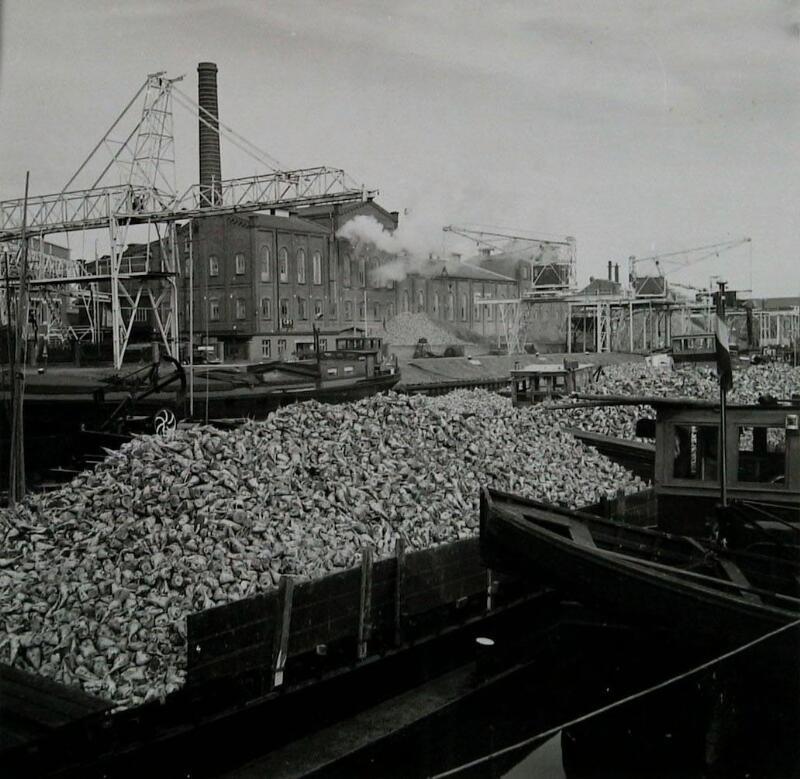 Delivery of beets to the cooperative sugar factory in 1965 (ZB, Image Bank Zeeland).

Long before IJmuiden had its Hoogovens steelworks, Sluiskil had its own coke factory. The factory was set up by a Belgian-French consortium. The coke plant also brought a fertiliser plant to the region. The gas that was released in the production of coke could be put to good use there. Work in the coke plant was particularly gruelling. The heat was intense and everything in the factory was dusty and covered in black soot. Whenever the wind blew in the wrong direction, clean laundry hanging on the line in Sluiskil would look just as black. Coke was used as fuel in the steel industry. When that industry began to decline, the factory had to close its doors at the end of the twentieth century.

Although the factory chimneys have been torn down, the complex is still intact. Recycling company Heros is now located there and they were able to make good use of the silos and cranes on the quayside. An authentic steam generator has also been preserved. This remarkably luxurious setup (with Jugendstil elements and a marble control panel) is the showpiece of the Industrial Museum Zeeland. 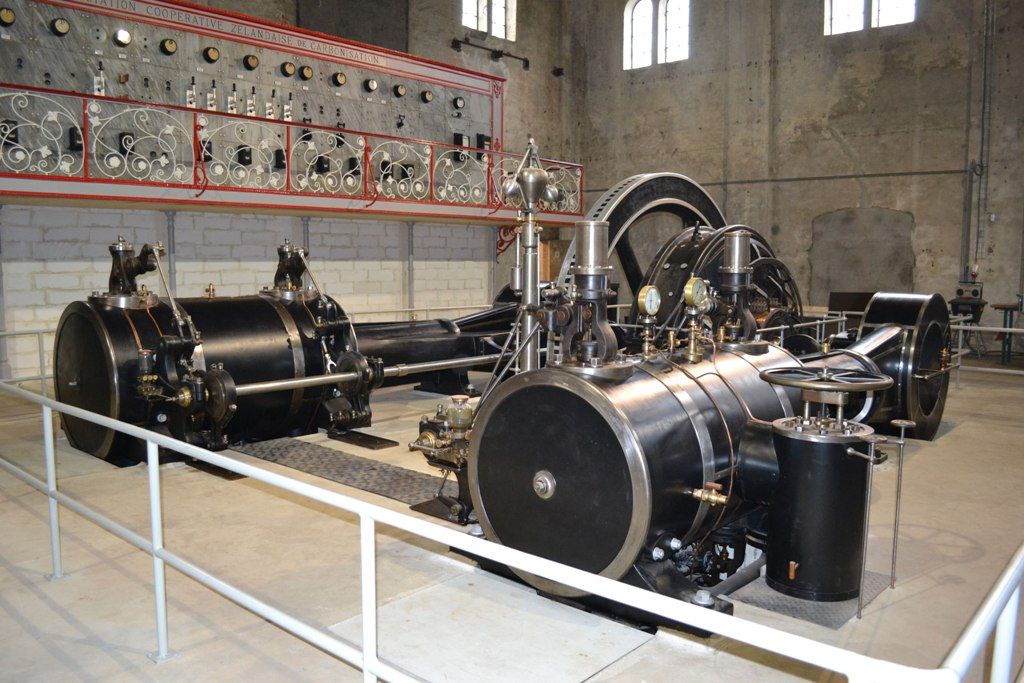 The steam generator with control panel from the coke factory in the Industrial Museum Zeeland in Sas van Gent (Erfgoed Zeeland).

Industry and innovation in the Kanaalzone today

Innovation and manufacturing are still very much alive. You can find a large collection of manufacturing companies in the Kanaalzone. If you would like to learn something about the region’s industrial heritage, you can visit the Industrial Museum Zeeland. Or you could settle down on a folding bench full of stories at the Ankerplaats in Sas van Gent. If you prefer a more active approach, there is a cycle tour past the region’s industrial heritage.