Before the advent of tractors, farmers had horses. They did the heavy work in the fields. The Zeeland draught horse was bred especially for the job. The glory days of the Zeeland draught horse were short-lived because mechanisation was introduced. Yet these horses are still very much loved. They are kept as a hobby and you can still see them in action during demonstrations.

The Zeeland draught horse breed came into being at the end of the nineteenth century. Horses were already being worked, but they were not very suitable for heavy work such as ploughing the tough Zeeland clay. Breeders in Zeeuws-Vlaanderen were the first to use Flemish coldblood stallions. The term coldblood is used in the horse world for horses that have a heavy build and a calm temperament. Once they started to import mares as well as stallions, breeding really took off. The breed was boosted even further during the First World War when many Belgians fled to the Netherlands, sometimes taking stallions with them. 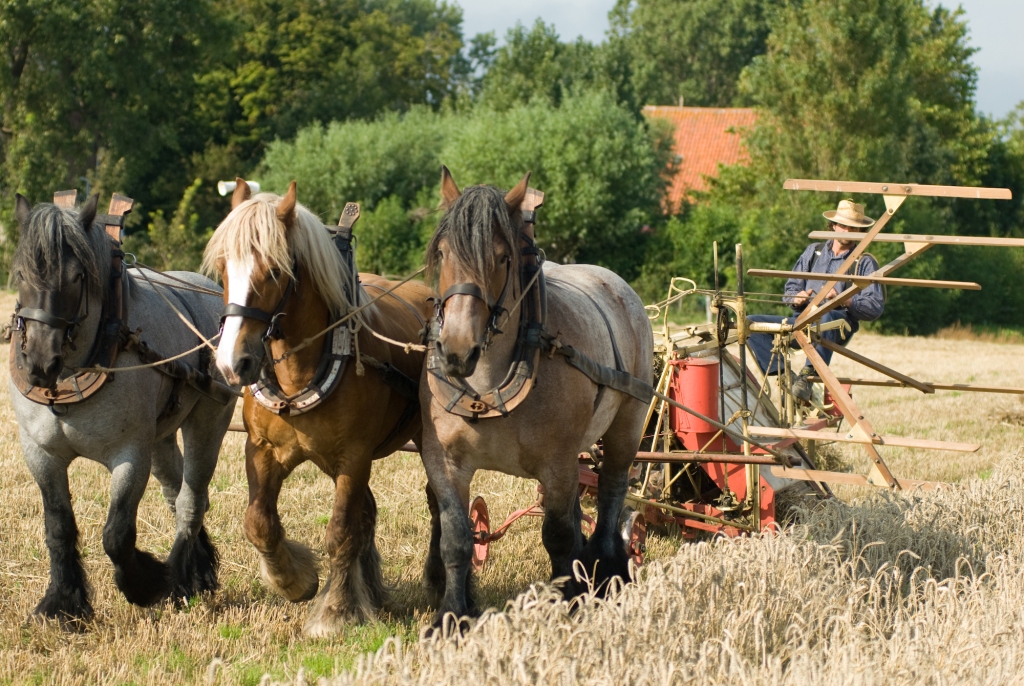 The importance of good horses

At the end of the nineteenth and the beginning of the twentieth century, good horses were of vital importance. They were needed in agriculture, for transport in trade and industry and for towing tasks in the ports. Zeeland therefore stood to benefit from a good breed of horse. The improvement of horse breeds was promoted on a national and regional level. Exhibitions were organised and a horse stud book was established.

Horses were put to work in the fields for a large part of the year. They were also used to pull farm wagons. Their work on farmland tended to follow a fairly fixed pattern. In spring, they pulled a so-called ‘sleepbord’ (drag board) over the land to break up clods of soil and thereby prepare the ground for sowing. July and August were harvest months for hay, grain and flax, and large wagons full of crops had to be hauled around. Afterwards, the horses would pull ploughs or harrows over the land that needed to be tilled again. In September, it was time for the potato harvest, sugar and fodder beets were next in October. And then it was time to plough all over again. A few months of rest followed in the winter.

As mechanisation gained ground, horses were put to work in different ways at first. Threshing was no longer carried out manually by people. Threshing machines were introduced that were driven by a horse mill – in other words, using pure horsepower. As time went by, mechanisation made horses dispensable in agriculture. Tractors did the work on the land, motorised threshing machines were introduced and goods could be transported by lorries or carts pulled by a tractor. Zeeland draught horses are now generally kept as a hobby. 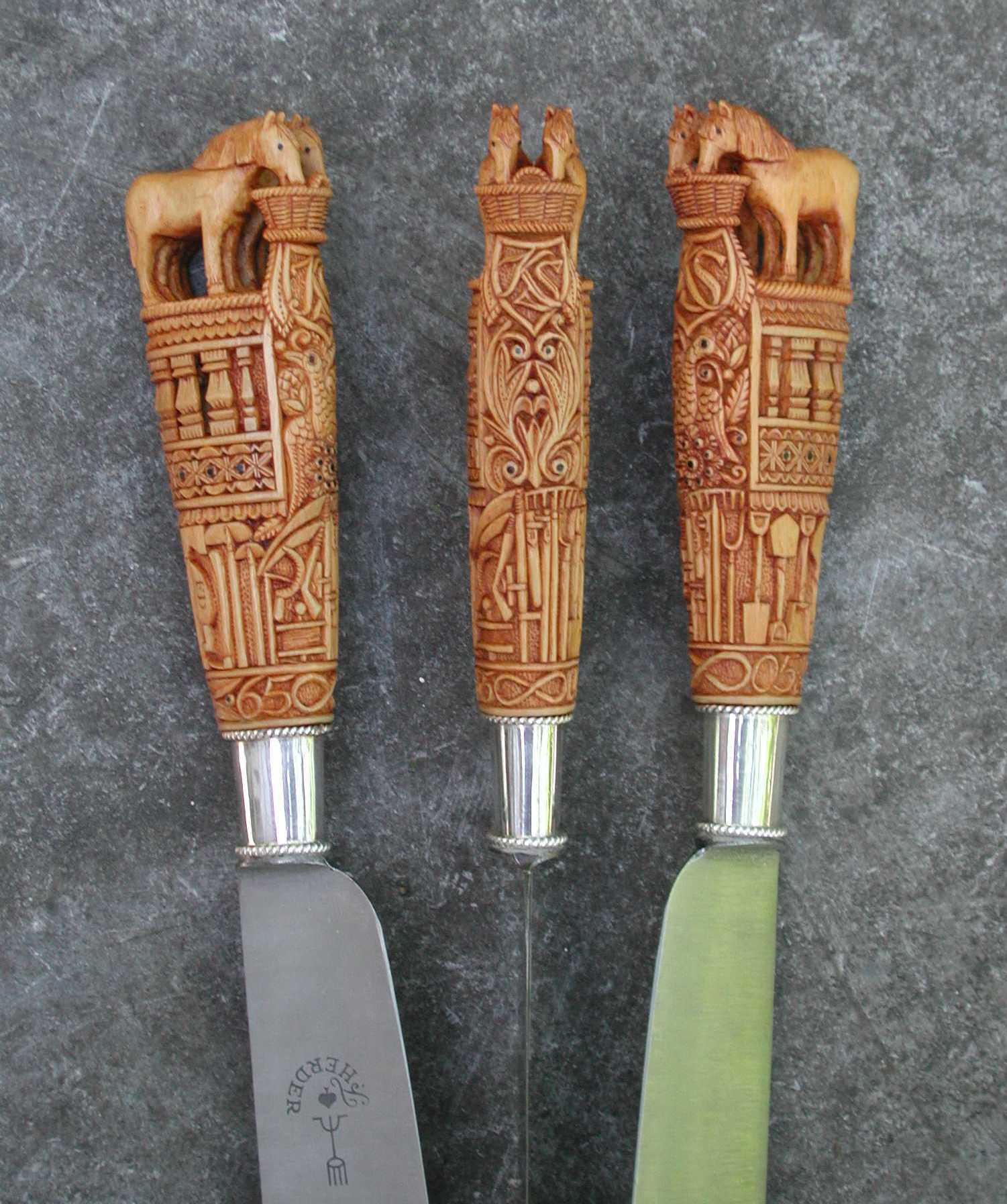 Three wooden handles (photo Frans Dingemanse). The handle on the right has agricultural tools depicted on it.

The importance of horses to farming can also be seen in the well-known ‘paeremes’ (horse knife). These knives have beautifully decorated handles topped with a crest in the shape of a team of harnessed horses. Another characteristic is that the handles have a hollow section containing a ball. Around 1800, handles with decorative carving were already common in Zeeland in all shapes and designs. They were crafted with the most diverse designs. Over time, these designs took on an agricultural theme (most people who owned such knives worked in farming). From the middle of the nineteenth century onwards, almost all knife handles have a pair of harnessed horses on top. If you would like to see an authentic ‘paeremes’, you can do so in the Zeeuws Museum in Middelburg. It has a number of ‘paeremessen’ in its collection.

You might come across Zeeland’s draught horses grazing in the meadow during a bicycle ride. But the nicest thing, of course, is to see these sturdy workhorses in action. Stichting Het Werkend Trekpaard (The Working Draft Horse Foundation) regularly organises demonstrations. The horses get to do what they are good at: working hard.

At traditional Zeeland special events, Zeeland draught horses are often the centre of attention. They can be seen in action during straô, ring riding and sjezenrijden events. Riders take their horses to the sea to wash their legs during the straô. This is thought to help rid their legs and hooves of germs. It is a festive occasion and the horses are dressed beautifully. Every year, the straô follows the same timetable. It starts eight weeks before Easter in Renesse. On the Saturdays that follow, a straô is held in Haamstede, Noordwelle, Ellemeet, Scharendijke and Serooskerke respectively.

During the ring riding and sjezenrijden events, people sitting atop a galloping horse or riding in a horse-drawn buggy try to stick their lance through a ring. Competitions take place from late spring to late summer. The sport is actively practised on Walcheren in particular. All kinds of horses are allowed to take part in the ring-riding, so you will also get to see lots of Zeeland draught horses. These are decorated, just as they are at the straô. Decorations for sjezenrijden are subject to rules. They have to be made of fresh flowers. A competition calendar can be found on the website of the Zeeuwse Ringrijdersvereniging (Zeeland Ringriders Association).