Zeeland is land and water. At the same time, it is the place where fresh water and saltwater meet, and that yields a tremendous wealth of food. Not only do you have plenty of fish here, but plenty of shellfish and crustaceans as well. Hunters and gatherers noticed this very early on. People have been fishing here since prehistoric times.

Prehistoric traces of fishing have been discovered in various places in Zeeland. For example, the barbs of a harpoon dating back to the Mesolithic were found at Aardenburg. In the Drowned Land of Saeftinghe, fishing net weights from the Iron Age have been found. This shows that people were already fishing with nets in those days.

Many traces from Roman times have also been uncovered. Fishnet weights, but also fishnet needles. People fished for their own food and at that same time, the trade in fish products was established. Allec (a kind of fish sauce) was also produced. Archaeological evidence for this was found in waste pits. This also indicates that shellfish (mussels, oysters and cockles) were popular.

From self-sufficiency to trade

From the eleventh and twelfth centuries onwards, people lived in settlements more often. Trade markets sprang up. It was very common in those days for each product to have its own specific location at the market. You can still see this reflected in the streetscape of today. Goes, for example, has an Oude Vismarkt (Old Fish Market) and Middelburg has a Vismarkt (Fish Market). The latter location is a particularly picturesque and listed as a monument. A flea market is organised here every first Saturday of the month. 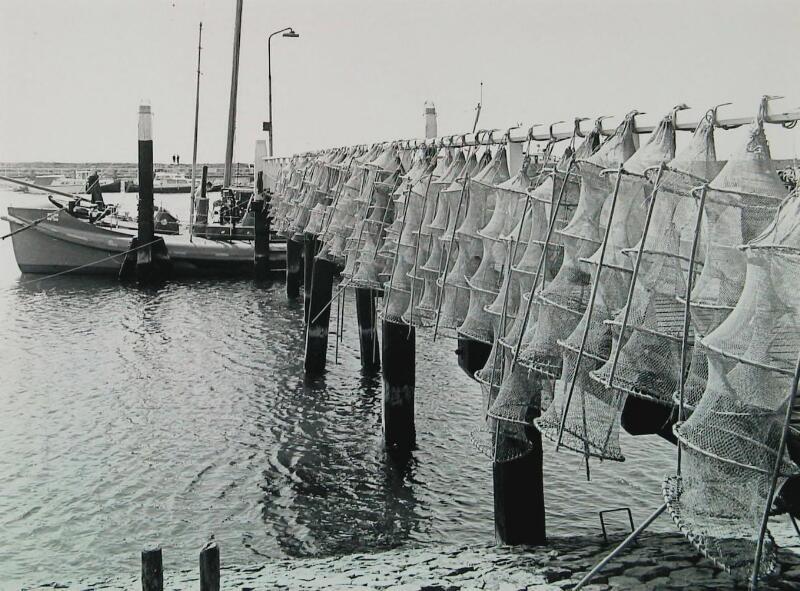 Over time, fishing became a specialist field. And as large cities emerged just outside the province (Ghent and Bruges), so did fishing villages that supplied the cities with fish and shellfish. Each group of fishermen developed their own methods for catching fish and the nets to go with it.

Well-organised fishing for herring took place from the fourteenth century onwards, also from larger ships in Zeeland. Fish (and therefore also herring) have a limited shelf life by nature. At the end of the fourteenth century, the method of gutting and curing herring was introduced. The fish were cleaned and salted on board. Tradition has it that the inventor of this technique was Willem Beukelszoon from Biervliet. Although there are doubts as to whether this is true, Beukelszoon is nevertheless celebrated in Biervliet. In the local Reformed Church, he features prominently on a beautiful seventeenth-century stained glass window and there is a statue of him in the town centre. 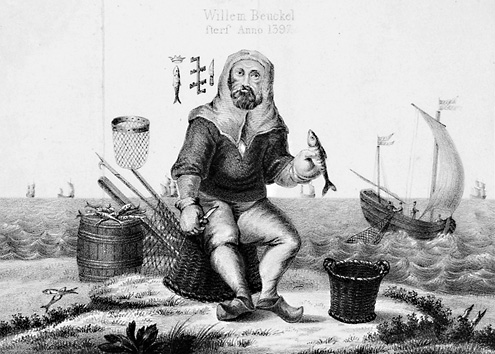 Willem Beukelszoon from Biervliet, image of the stained glass window in the church of Biervliet. From: Zeeuwse Volksalmanak 1844 (Zeeuws Archief, KZGW, Zelandia Illustrata).

Whoever invented it changed Zeeland’s herring fishing industry forever and brought it enormous prosperity. Fishermen could stay away for weeks at a time. Even larger ships were needed to transport all the herring. Herring fishing signified a major economic boost for many of Zeeland’s fishing towns. And because a lot of salt was needed to pickle the fish, places where salt was extracted also prospered. Growth was rapid, but the demise of this flourishing industry was just as swift. Far-flung voyages became too risky because of privateering and the Eighty Years’ War.

When the herring catch began to decline, coastal fishing took over. Cod, halibut, turbot, haddock, groundfish and mullet were mainly caught for the local market. A number of villages grew into full-blown fishing towns. Arnemuiden, Brouwershaven, Westkapelle and Biervliet, for instance, joined established names such as Zierikzee and Vlissingen.

Flatfish were also fished. This was done from the coast with trawl nets. Often this was carried out using manpower, but the nets were sometimes pulled by horses as well. Demonstrations of this type of fishing are still given in Breskens in the summer months. By the way, trawl nets are still in use to this day, on boats that use them to fish for shrimp or flatfish. They are easy to recognise. You can see from the shape of the nets that they remain open while being towed and they are attached to so-called ‘bomen’, as in trees. Traps were also used to fish off the coast. A special form of fishing with traps was known as weervisserij – weir fishery. Nowadays, this still takes place at three locations in the Oosterschelde, but in the heyday of weir fishery, there were about thirty locations in use and the anchovies caught there were a world-famous delicacy.

Shrimps were also caught off the coast. Then, from the fifteenth century onwards, boats were also used for this purpose. The flat-bottomed Hoogaars vessels were built especially for shrimp fishing. At the end of the Eighty Years’ War, the demand for fish and shrimp soared. Fishermen started to process the shrimp on board so that they would keep better and salt preservation techniques were improved. Shrimp was even cooked on board from the end of the 19th century onwards. 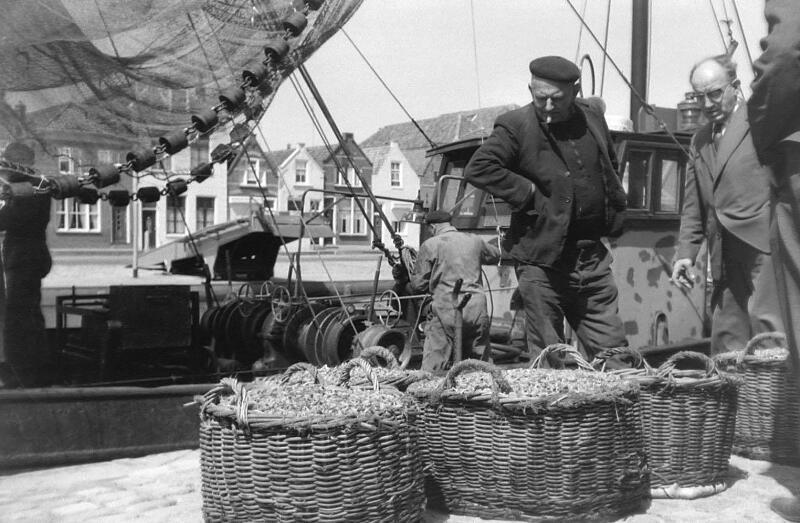 Arnemuiden in particular was famous for its shrimp fishing. Men sailed out on their flat-bottomed hoogaar boats, cooked the shrimp on board and at home the whole family worked together to peel the shrimp. If you would like to see how the fisher folk used to live here, then you should visit the Museum Arnemuiden. They have completely restored ‘t Uusje van Eine – a fisherman’s home from the early twentieth century. You will also find Werf Arnemuiden in the town. This is where flat-bottomed Hoogaars boats were once built. Nowadays, it is a museum shipyard where they work on the restoration and preservation of Hoogaars boats.

Families and played an important role in fishing not just in Arnemuiden. Although women did not venture out to sea, they had a crucial role when it came to preparing the sailing trips and processing and selling the catch. Women made and mended nets and cleaned fish. Selling it also involved a lot of heavy work. Arnemuidse women, for instance, carried a yoke on their shoulders that held two heavy baskets and they went to Middelburg, Vlissingen or Goes to sell their wares. 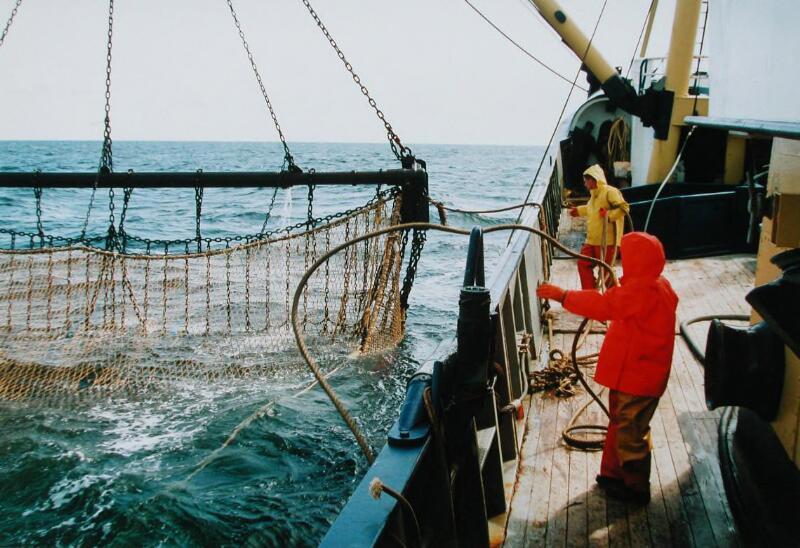 The trawl nets of the ARM-44 Neeltje Jannetje are spread out in the North Sea, 2003 (ZB, Image bank Zeeland, photo W. Helm).

To this day, plenty of fishing is still going on in Zeeland. Boats from Breskens, Vlissingen and Colijnsplaat sail out every week. This has been scaled up considerably. Fishermen go out to sea on large trawlers. Nevertheless, there is still room for smaller-scale industries such as eel fishing (on Schouwen-Duiveland, you will still find authentic eel smokehouses) and lobster fishing (the Oosterschelde lobster is a delicacy that you can savour in the finer restaurants from the end of March to mid-July).

Proud of the fishing industry

Zeelanders are proud of their fishing industry. They also regularly celebrate this trade sector and love to showcase what is going on in the fishing industry. This is why there are a lot of annual fishery festivals where you can literally sample the delights of fishing. There are also several fishing museums: Visserijmuseum Breskens, Brusea in Bruinisse and the Oosterschelde Museum in Yerseke.