Nowadays, Zeeland’s villages, towns and islands are all connected to each other via easily accessible roads. But for years, boats were the most important means of transport in this province, which is criss-crossed by estuaries and gullies. Chances are that you took the ferry when you had to go on a trip, and you shipped the produce from your land via a local, conveniently accessible port. Now that land transport is in many cases a more convenient option, only a limited number of ports remain in operation, but you can still find (remnants of) old ports throughout the province – sometimes even deep inland. Ferries are also still around. Most of them are only in operation during the summer season to transport holidaymakers.

The tide port of Strijenham

The port of Strijenham is one of the few remaining tide ports on the Eastern Scheldt. For centuries – at least since the 16th century – the port was used by bargemen who loaded and unloaded their cargoes there. Up until after the Second World War, it was mainly used as an agricultural port. Hay, straw, onions, potatoes and sugar beets were transported from this port. When the transport by road of agricultural products started to take off, the port eventually lost its purpose. The port is now used by the local water sports association.

In the heyday of the beet port in Geersdijk, autumn was a hubbub of activity. It was the time of the sugar beet campaign on Noord-Beveland, and wagons full of sugar beet stood in line on the quay to unload their cargo into the ships moored there. Noord-Beveland was already a hotspot back then as far as the cultivation of sugar beet was concerned. The island had no permanent connection with the rest of Zeeland, so sugar beet could only be transported by water. That is why almost every village had its own small port. Geersdijk was no exception. When Noord-Beveland was connected to the mainland, the agricultural ports were a thing of the past. Nowadays, the port of Geersdijk is mainly used for water sports. Apart from this port, there are more (remnants of) old agricultural ports that can be seen along the coast of Noord-Beveland. Large parts of the island’s coastal area can be explored by bike on cycle paths that run alongside the outer dikes. You will inevitably pass the ports as you cycle along.

One ferry connection between Kamperland and Veere has already been in existence since the Middle Ages. At the beginning of the twentieth century, the L-shaped jetty was built just outside Kamperland, complete with a basalt embankment. The jetty is still standing and both the embankment and the jetty have been declared national monuments. From 1930, the Zuidvliet was put into service as a ferry on this route. It has been retired for many years now, but you can still admire it in the Museumhaven in Zierikzee. The ferry service was discontinued after the construction of the Veerse Gat Dam, which connected Walcheren and Noord-Beveland, but a bicycle and pedestrian ferry now operates there again during the tourist season. 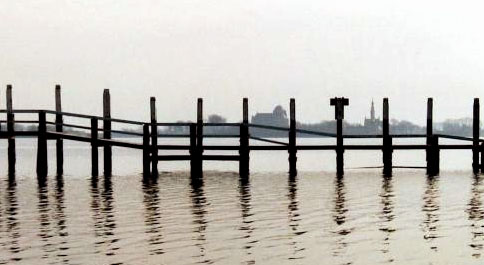 The crossing from Sint-Philipsland to Schouwen-Duiveland is short, however, it did meet a demand. In the 88 years that the Anna Jacobapolder-Zijpe ferry service existed, a vast number of people have been transported. In the top year 1963, almost 950,000 people were ferried over. At peak times, the ferry was extremely busy due to a large influx of tourists. There were sometimes waiting times of four to six hours and, during the season, the skipper sailed on until deep into the night to ferry everyone across. With the advent of the Philips Dam, the ferry became redundant and was subsequently withdrawn from service in 1988. However, a bicycle and pedestrian ferry service is now in operation once again in the tourist season. In Bruinisse, you can still see a remnant of the last ferry that sailed here on its regular service schedule. The cabin has been added as an extension to the Storm café-restaurant.

When the Kanaal door Walcheren was dug at the end of the nineteenth century, Zeeland gained two new canals and a part of the hamlet of Groot-Abeele was abruptly cut off: New Abeele. A ferry crossing was swiftly put in place to restore the connection. For seventy years, it carried pedestrians, horses, cattle and small equipment across the water. The ferryman was especially busy on Sundays and holidays. Then, the playground and tea garden of café Bellevue in Groot-Abeele attracted a lot of visitors. There are few traces of the ferry left, but the ferry landing (which kind of resembles a boat ramp) has been preserved. There is a bench and, when the weather is good, there are almost always cyclists or pedestrians here and sometimes they sit and enjoy a picnic. It is a lovely spot with a great view over the canal.

The only ferry service still in daily use is the Vlissingen-Breskens ferry. Since the construction of the Western Scheldt Tunnel, this Western Scheldt ferry only transfers cyclists and pedestrians. It is the perfect way to spend a day cycling on the other side. The ferry service is probably about as old as the city of Vlissingen itself. For centuries, rowing boats and sailing boats were used for the crossing. Then from the early nineteenth century, steamships were used. The advantage of these ships was that they could sail in almost all weather conditions. Motorised ships have been in use since the 20th century onwards. For many, the ferry was a way to attend school or to reach their employer on the other side. For recreational passengers, the crossing was more of an experience and they also enjoyed a mug of ‘erwtensoep’ (traditional split pea soup) and a ‘broodje kroket’ (a typical Dutch bread roll with a croquette).