‘Eendenkooien’ – duck decoy grounds – are very Dutch. They date back to the early Middle Ages. Although the word ‘kooi’ (‘cage’ in English) suggests otherwise, the term ‘eendenkooi’ refers to an area of land, a landscape that is made up of water and woodland. Wild ducks, i.e. mallards, could be caught there thanks to an ingenious trapping system.

There must have been around 1,500 of these duck decoy grounds in the Netherlands. Of these, 111 are still in operation, four of which are in Zeeland: in Oostkapelle, Renesse, Oosterland and Sint-Philipsland. The duck decoy grounds on Sint-Philipsland are completely intact and still widely in use. Thanks to the decoy person and the dogs, an age-old craft remains intact. Nowadays, the ducks are not caught for consumption, as they used to be, but so that they can have rings attached to them. The management of the grounds is in the hands of Het Zeeuwse Landschap (the organisation for the preservation of the Zeeland landscape) and is focused on the nature, landscape and cultural history of the area. 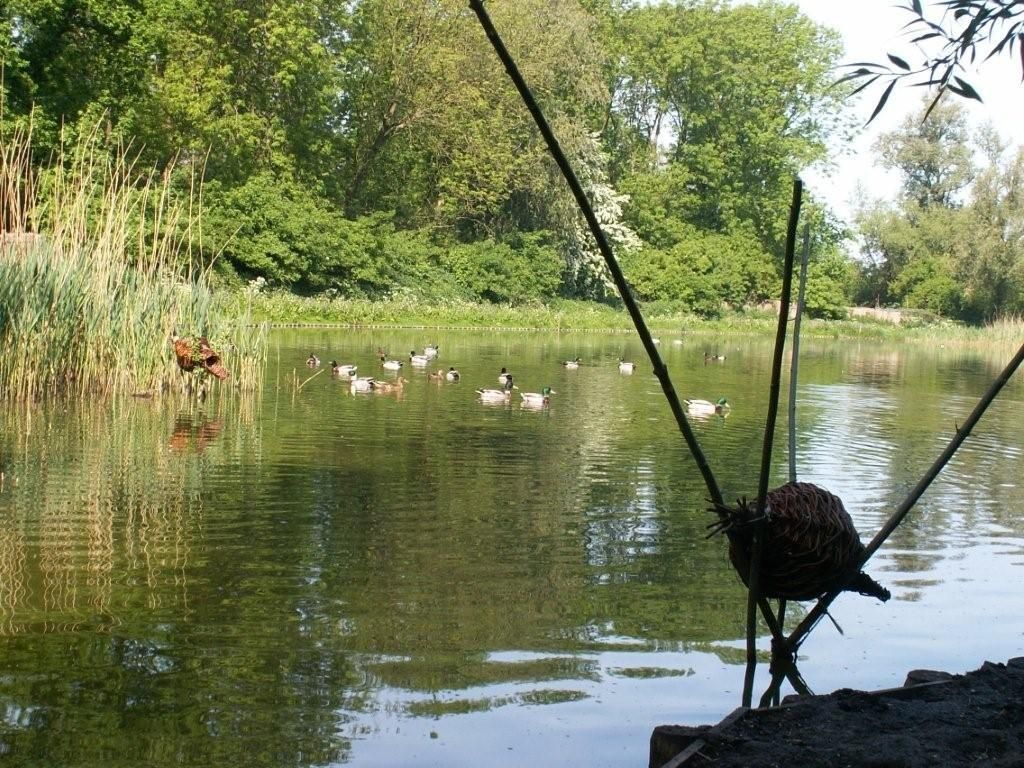 The whole area consists of a pond (the kooiplas – the decoy pond) with four crooked, narrow ditches lined with reed fencing (the trap pipes) and surrounded by woodland. It has the shape of a stingray egg, a sort of H shape. The wind and the flight behaviour of ducks have led to this somewhat peculiar shape.

These duck decoy grounds were constructed in 1882 near an old fairway, which had come to lie on the inner side of the dike when the Anna Jacobapolder was reclaimed. What is left of the creek is still recognisable today.

The Anna Jacobapolder is named after the wife of the captain of the engineers, Willem Frederik Del Campo, commonly known as ‘Kamp’. He was the one who dammed up the area in 1846 and developed it further. He was an influential military officer and maintained close ties with King Willem III. The duck decoy grounds were laid by Kamp’s son-in-law, Martini Buys. The duck decoy grounds were the property of the family and were used for hunting.

The cooperation between people and dogs plays an important role in the decoy business. The kooikerhondje (kooiker/decoy dog) is a typical Dutch breed. They are docile, intelligent animals which let themselves be trained to perfection. The kooiker dog is frequently depicted in seventeenth-century Dutch paintings. On the tomb of William of Orange Nassau in the Nieuwe Kerk in Delft, the kooikerhondje lies at the feet of his lord. History records state that William of Orange once owed his life to his dog. This happened during the Spanish occupation, when the animal raised the alarm when a fire that broke out. 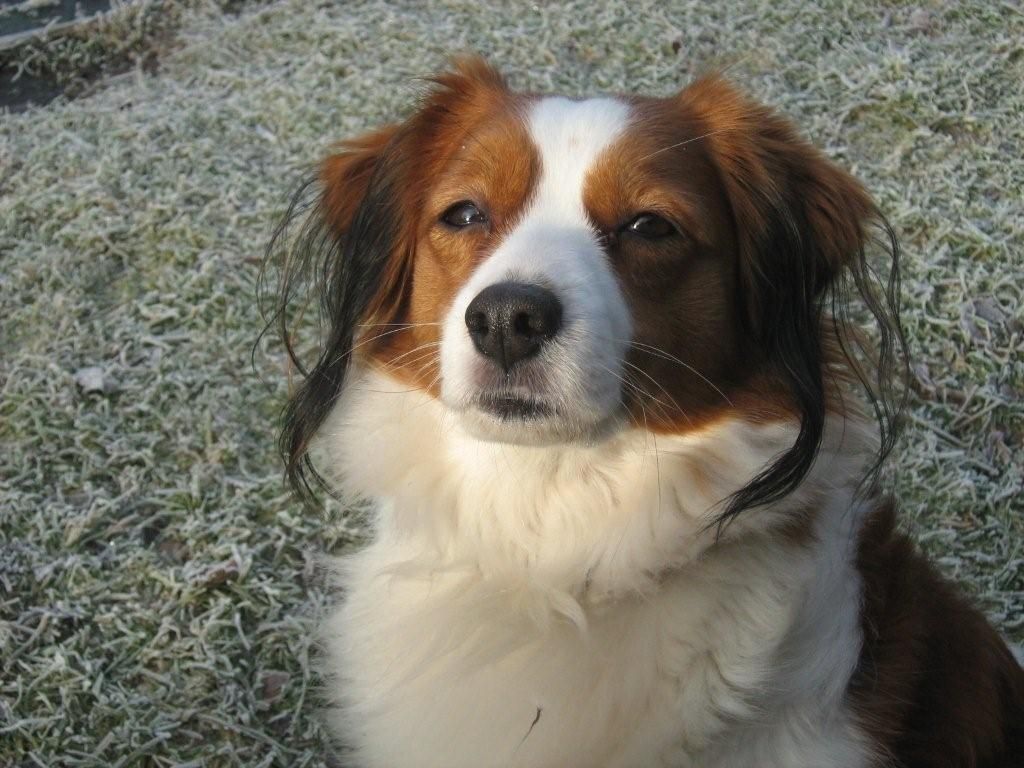 Expressions such as’ ‘achter de schermen kijken’ (‘look behind the scenes’), ‘kort door de bocht’ (literal translation: ‘short through the bend’, that is ‘cut to the chase’, or overly simplified/blunt) and ‘de pijp uit gaan’ (literal translation: ‘leave the pipe’, that is pass away), appear to be directly linked to the old kooiker/decoy-man profession. That works as follows:

In order to attract mallard ducks, the kooiker (the decoy-person) has a large number of tame ducks in his barnyard which he feeds daily. The barnyard ducks stay in the cage during the day, fly out in the evening and forage at night. In the morning, they come back and bring mallards back with them.

The trapping process starts with choosing the right kind of pipe trap. This is important, because when ducks fly off, they fly against the wind. Once the trapper has chosen his trap pipe, he tosses some food into the pipe. The barnyard ducks know this, so they go after it and lure the mallards along with them. 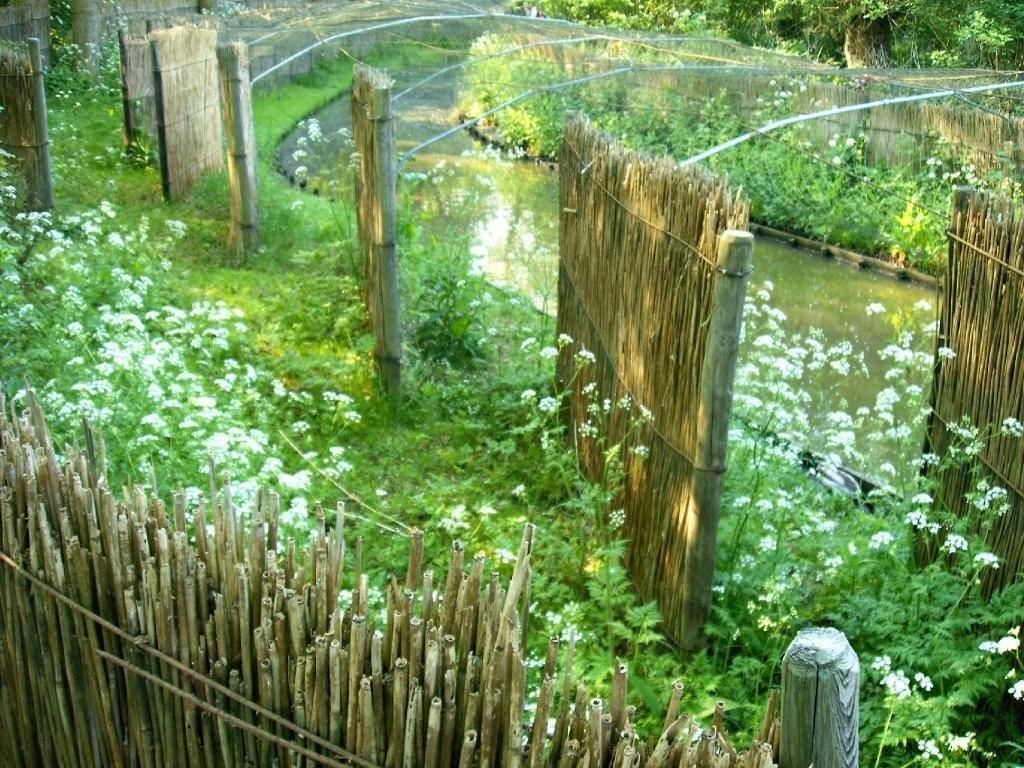 Once the mallards are through the bend of the pipe trap, they can no longer see the pool. They then fly further and further into the pipe, towards the light. The wooded area around the decoy pond is kept clear at the end of each pipe. Finally, they can go no further and crawl to the only apparent way out, the end of the pipe, the trap cage. The decoy-man lets it fall shut and the ducks are caught.

All wet areas in the Netherlands have duck decoy grounds, each with their own character. We can differentiate between veldkooien (field decoys), rivierkooi (river decoys) and dune decoys. The regional traditions helped to define the appearance of the decoys. We can see this in the weaving of breeding baskets, for example. Each region has its own traditional model.

Besides catching mallards, ‘blauwgoed’ were also caught, especially on the coast. ‘Blauwgoed’ is a Dutch term from the professional jargon of decoys and stands for all duck species other than the mallard. These include wigeons, shovelers, northern pintails, teals and gadwall. 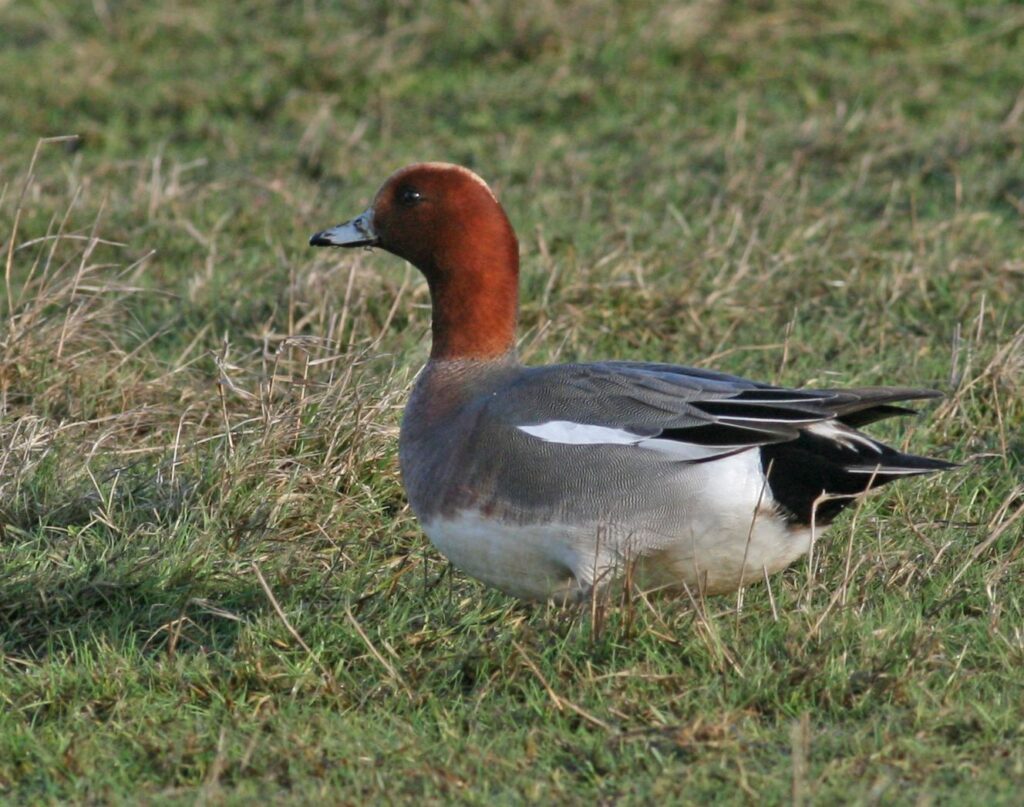 The woods are teeming with birds and in the rest of the duck decoy area, apart from the ducks obviously, there are countless other species to be seen as well. For example, the little egret, the bittern and the kingfisher, examples of birds that, each in their own way, live off the fish in the decoy pond.

There are more than 150 plant species, including the bee orchid, bloody crane’s-bill and the earthnut pea. Insects (more than 250 species), bees (19 of which are on the IUCN Red List) and dragonflies (including such remarkable species as the migrant hawker, the damselfly and the broad-bodied darter) are also well represented.

Mushrooms such as the rare comfrey mycena grow there. And that is only one of the two hundred species that can be found in a duck decoy area. The duck decoy grounds are a haven for roe deer and small mustelidae such as the polecat and the weasel. 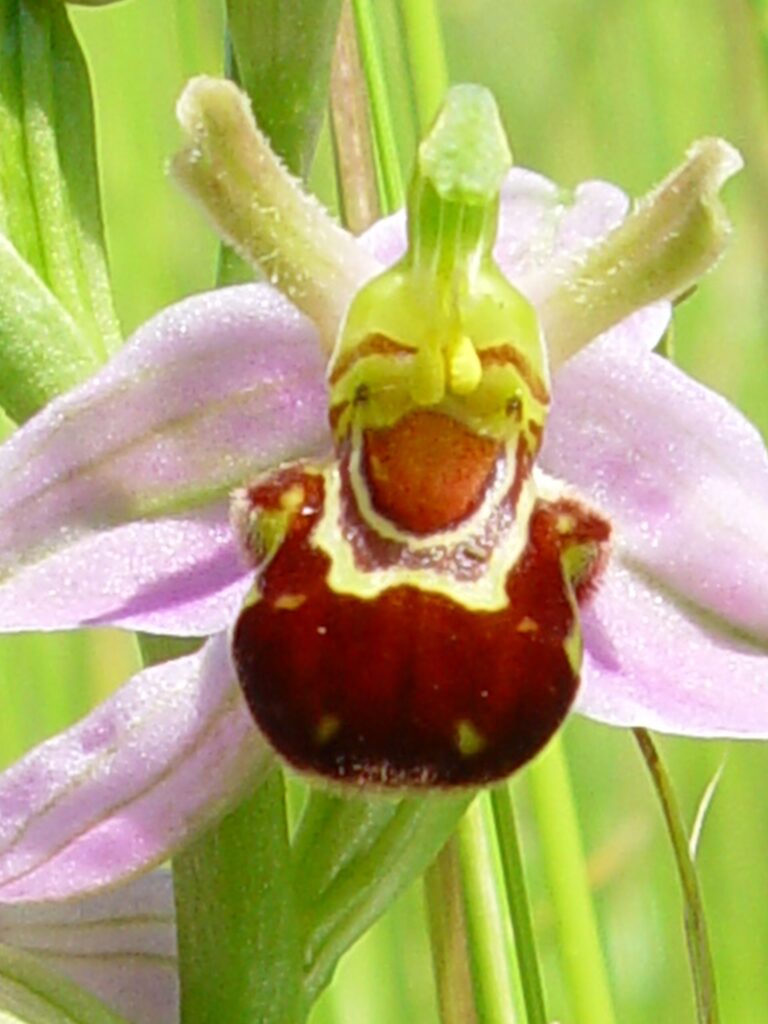 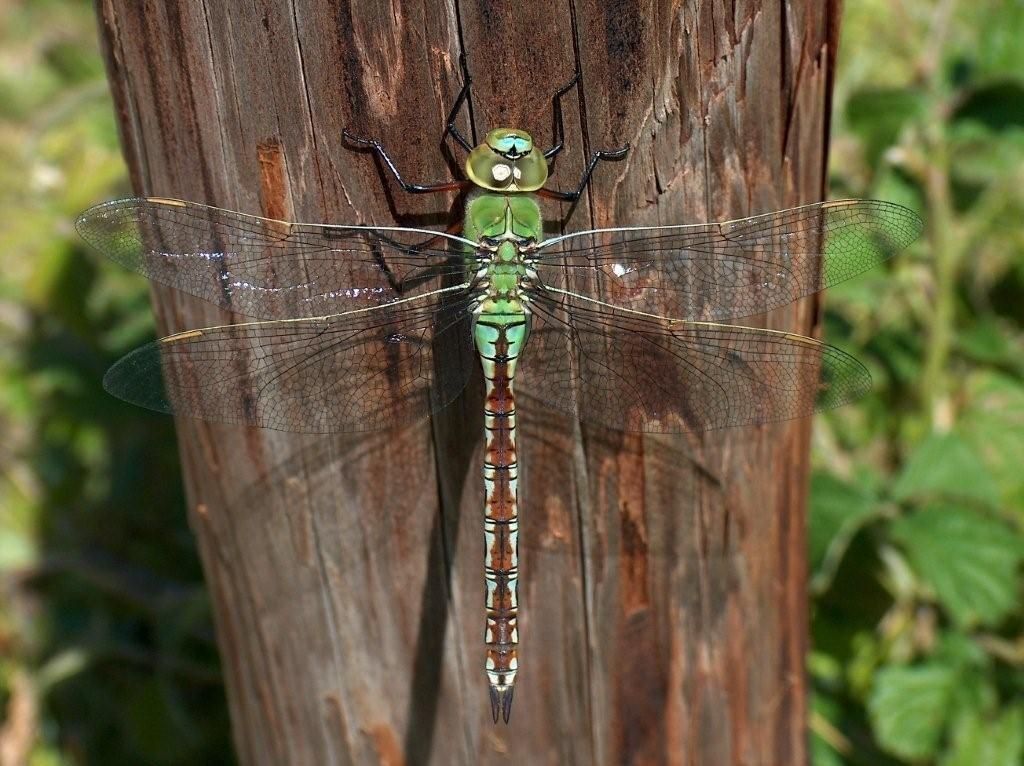 In short, the peace and quiet that are part of a duck decoy area, the way the decoy-person goes about their work and the many plant and animal species that are found there make duck decoy grounds an invaluable and unique area of nature.