Early on in the nineteenth century, Domburg was the first seaside resort in Zeeland. Wealthy townspeople from Middelburg were the first to come here, but – partly owing to excellent new connections – other visitors from outside Zeeland soon followed. And that is when business started booming in Domburg.

The birth of a seaside resort

In the early nineteenth century, the theory that seawater had a healing effect spread. The first seaside resorts sprang up and in Domburg, the first spa treatments were offered from 1833 onwards.

Those who could afford it had a horse-drawn carriage ride them into the surf and then they would take a refreshing dip. Obviously, they had to be decently dressed. Domburg attracted many people from outside the province. Well-off families had splendid villas built on the dunes. Attractive tourist facilities were also built. The Badpaviljoen on top of the dunes offered all the space you needed for high-class entertainment with a veranda, billiard room, reading room, outdoor terrace and a ladies’ salon. The rather posh Badhotel was built slightly further inland. The Badpaviljoen was renovated at the beginning of the 21st century and now houses apartments and a hospitality business with an outdoor terrace overlooking the beach in Domburg. The Badhotel burned down and was rebuilt in the same style. It also has spa facilities. As such, Domburg is still a health and wellness hub today. 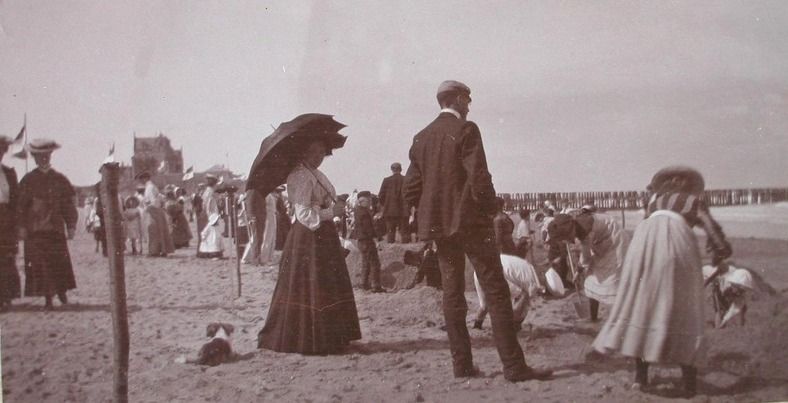 At the beginning of the twentieth century more and more tourists discovered the Domburg beach, although they would keep their clothes on. Photo from around 1906 (ZB, Image Bank Zeeland).

By the beginning of the twentieth century, Domburg had developed into a chic seaside resort. The Amsterdam-born doctor, Dr. Johann Mezger (1838-1909) had been a regular guest there for years. He became famous among the European nobility for his ‘scientific massage’ and his ‘golden thumbs’. Nowadays, we would call his work physiotherapy, but in those days it was new to everyone. Mezger’s clients followed him wherever he went. His patients included King Gustav V of Sweden, Tsarina Marie Fedorovna and her daughter Olga, Empress Elisabeth (Sissie) of Austria and the former French Empress Eugénie.

Mezger had his practice in the villa Irma, built in 1887 between Domburg and Oostkapelle. This villa no longer exists. However, there are still many other similar villas between the two villages and in the centre of Domburg, a bust of Mezger can be found on ‘t Groentje.

The fact that the coastal town eventually also attracted a great many artists was, apart from the much praised ‘Zeeland light’, certainly also due to the presence of a wealthy public. Domburg had a magnetic effect, especially after the arrival of Jan Toorop, who liked to bring artists together. It became an artists’ colony where more and more artists flocked to during the summer: Jacoba van Heemskerck, Lodewijk Schelfhout and even Piet Mondrian. This marked a Zeeland trend in Domburg. An artists’ colony also arose in Veere and many other artists settled in the region. Charley Toorop, for example, moved to Westkapelle. 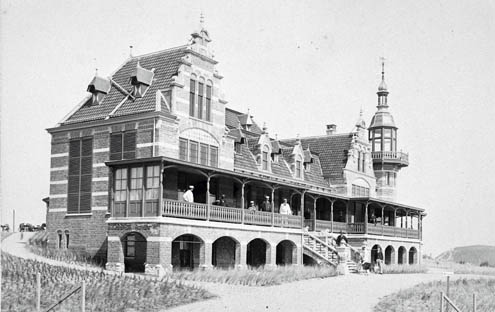 The Badpaviljoen in Domburg in all its glory, around 1900 (Zeeland Archives, HTAM).

Exhibitions were organised in Domburg from 1908 onwards. Not much later, a simple and light exhibition building was constructed opposite the Badpaviljoen. This exhibition became a regular feature during the Domburg summer. During the first years in particular, the leading international artists in the field of new art trends could be admired there. The building was eventually destroyed by storms. In 1994 a new exhibition building was erected on the Ooststraat, which is very similar to the original. This is where the Marie Tak van Poortvliet Museum was founded. Marie Tak van Poortvliet has meant a lot to the Domburg circle of artists. She was incredibly wealthy and collected art, but also awarded scholarships and published articles on modern paintings, music and anthroposophy. Every year, several exhibitions are held in the museum that either have a connection with Walcheren, (the artists of) the Domburg artists’ colony or artists’ colonies in general.

If you want to look at art, then the Marie Tak van Poortvliet Museum is the perfect place for you during the tourist season. Apart from that, there are plenty of galleries in Domburg where you can wander around. You can find all kinds of things there. From simple pictures or cheerful jewellery to sketches by Mondriaan or innovative works by young artists.

The sources of inspiration for the works of art created during the time of the artists’ colony can still often be seen in Domburg and the surrounding area. Mondrian painted the Westkapelle lighthouse and the Domburg windmill. They are both still there today. The same goes for the trees in the Manteling, which he captured so vividly, although you may have to spend some time looking for them. They are easily recognisable, but perhaps difficult to find among all the other greenery. 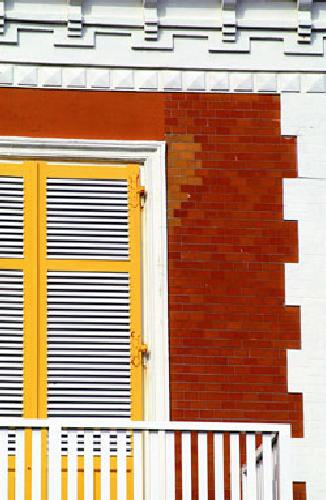 Detail of the Carmen Sylva villa.

If you want to daydream about the glory days of Domburg as a seaside resort for the European elite, be sure to walk past the ultimate summer cottage: Villa Carmen Sylva. It is centrally located on the Domburg dunes near the Badpaviljoen and the warm, Mediterranean allure of the building makes it impossible to ignore. The building was built around 1885 for German eau-de-cologne tycoon Franz Aldenbrück von Brühl, who named it Villa Maria. He later sold it to his compatriot Carl Erbschloe. After he had hosted Queen (and poetess) Elisabeth of Romania there, he named his villa after the pseudonym that the queen used when she wrote: Carmen Sylva. You can’t actually walk around inside the villa, but you can dream about long summer evenings on that lovely veranda on the seafront side of the building… Of course, you could do that while strolling across the Domburg dunes.